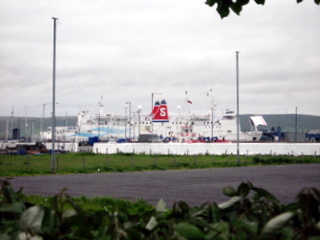 Low Glengyre is a Caravan Club Certificated Site: it’s immaculate and the owners are really helpful – they dried out all our washing overnight and even gave us a donation for Cancer Research!  When I set off at 8 o’clock I headed in the ‘wrong’ direction (because I wanted to go round the north part of the peninsula) and arrived in Stranraer from the north, after spotting a few Eider Ducks in Loch Ryan.  It was dry, and as I turned east the wind got behind me and pushed me nicely along the roadside cycle track.
Well, until I got to the first big hill up Glen App, which went on and on, with a really rough road surface, together with all the big HGV’s that had just landed at Cairnryan – most of which gave me a wide berth… but not all of them! 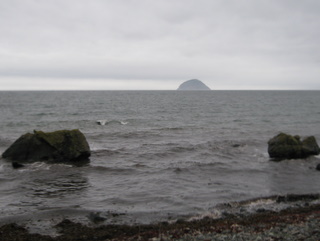 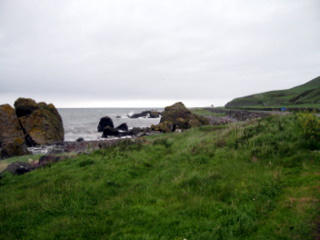 But then it was a long fast downhill to Ballantrae (brew) followed by several miles of road works – the new surface had been laid and it was like cycling at the velodrome – fabulous!  A short climb led to a really scenic stretch of coastline, reminiscent of California’s Big Sur (I haven’t been but I used to watch The Rockford Files!), with the ever present monolith of Ailsa Craig prominent out to sea. 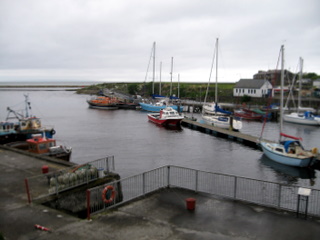 It didn’t take long to reach Girvan (pretty harbour, not sure about the rest of the town) and then lunch just south of Turnberry.  It was still dry and I tweeted something to that effect, saying, as I recall, that I was “happy, happy, happy”!  Big mistake. 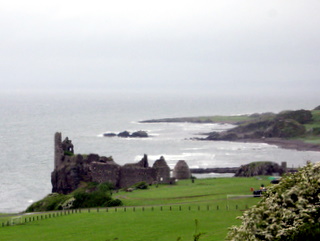 Turning inland, the road kept rising steadily. A few spots of rain soon turned into cats and dogs, and so it was to be for the rest of the day.  Dropping down to the coast again I went through the village and harbour of Dunure, with an interesting ruin, and then arrived at Ayr.
For some reason the route on my SatNav now ran out, and I had 20 miles to go!  After a quick rendezvous with the van and a look at the map, I set off again, trying to memorise the route.  The rain continued to lash it down; passing Prestwick Airport I could have sworn I saw Elvis, but it turned out to be another cyclist emerging from a cyclepath signposted Troon.  He confirmed that it was tarmac all the way so off I went on it.
Somewhat disorientated I carried on following NCN 7 through housing estates, roadside verges, industrial estates, relying on my normally sound sense of direction, until, after Irvine, I became less and less confident as I seemed to be heading more and more towards Glasgow, and signs for Stevenston or Saltcoats were completely non-existent.  Twice I asked for directions – each time I was told I was on the right road, but it was a bit unsettling when one person said Saltcoats was 2 miles off, and the next said 15!  It turned out to be about 5.  Finally I asked again at a garage, used the toilet (even this was picked up on Fleetsmart!) and then, like a drowned rat, managed the final mile to the Park Resorts Holiday site that is Sandylands.
Another day done.
Posted by Bill Honeywell at 20:41