Cycling 111 miles from Clitheroe to York and back (nearly!)

Yesterday was the longest bike ride of the year so far:  Ruth Warman, a fellow member of Clitheroe Bike Club, had planned to ride from Clitheroe to York and back to raise funds for Everyman Male Cancer and I thought it would be a good idea to go with her for a bit of moral support.  It’s nearly 65 miles each way, so to do this in one day is a serious undertaking. 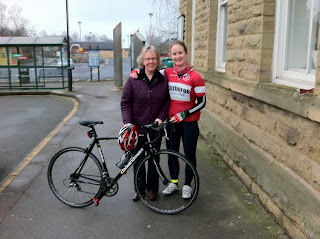 Ruth & Mum at the start in Clitheroe

Two of Ruth’s friends were also hoping to join her but had to drop out: I must admit, whilst suffering from a touch of man-flu the previous day, I was having misgivings myself, but… well, there’s no substitute for a bit of exercise to see off those coughs and sneezes!  So I arrived at the Platform Gallery on time at 8.00 am to find Ruth and her mum who was there to see her off.  There’s not much traffic at that time on a Sunday morning so we decided to follow the main A59 to Skipton rather than use hillier country roads through Rimington and Barnoldswick.

I hadn’t ridden with Ruth before so it was reassuring to find that we were both on about the same pace.  She’s also very polite, taking her turns at the front, so I had no doubt we would get on for the rest of the day!  Through a quiet Skipton, past Chelker Reservoir where the ageing wind turbines are always stationary, then the lovely downhill through Addingham. Just as had my hands full with some food the car in front of me decided to stop, which was a bit interesting! 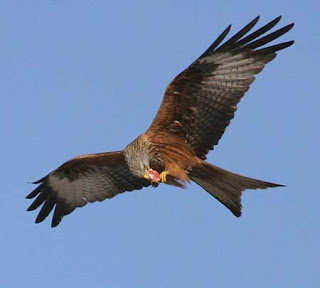 From Ilkley the traffic can be avoided by taking a really pleasant country road on the other side of the Wharfe, quiet but for the Sunday rugby games which were just starting on the town’s pitches. Otley next, then Pool and a short stretch of the busy Leeds – Harrogate road before turning on to more quiet country lanes. It was here that I saw the first Red Kite of the day, hanging in the air above a small copse and really quite close to us. For the next few miles these magnificent birds were almost everywhere – imposing birds of prey with long wings and a forked tail, seemingly oblivious to our presence. Sometimes we could see four at once. I still get that jaw-dropping feeling at times like this.

Through Sicklinghall to Wetherby (where a Sparrowhawk dashed across the road so close in front of me that I nearly hit it) then a fast, level 12 miles with a helping tailwind to York. Although I told Ruth that I know York quite well, I usually only walk around the centre, so of course I went the wrong way (for a bike) and ended going the wrong way along a one-way street (which was effectively pedestrianised anyway with the Sunday shopping throngs). Right at the end of the street a policeman pointed out the error of my ways, but he was really polite and let us carry on. 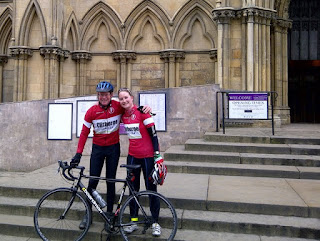 And then we were at York Minster, which seemed a fitting place to end the first leg.  I never cease to marvel at the work that went into this iconic building.

From here it was a short ride along the River Ouse to the house of my son Mark and his wife Sandra, where we grabbed a brew and freshly-baked scone.  It was after 2.00 pm when we left, so we knew we were going to need lights later on. 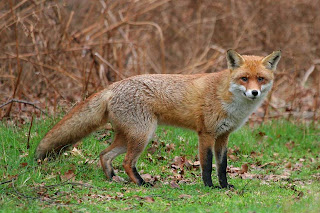 Near Sicklinghall a Fox ran across the road just in front of us and the Red Kites were hanging around again. The wind wasn’t as helpful on the return, and it took us over two hours to get to Otley, where we were both ready for the loo. It took a while to find them, by which time the man from the Council was just closing them.  Now you’ve all heard stories about ‘jobsworths’ so I have to say that this gentleman was a delightful exception. He said he was happy to wait, in fact he would keep an eye on our bikes, and then directed us to a good bikers café where we had a coffee and a big plate of chips.

I couldn’t believe that it was now 5.00 o’clock! And still 35 miles to go! So off we set on the back road to Ilkley in fading light, then found a section of old road which gave us a quiet entry to Addingham where it’s a long, long uphill.  The light was OK when we started but by the time we got to the top it was dark!!  The pubs in Addingham looked so inviting I was tempted to just stop there and ring Val for a lift home! (I didn’t, of course!).  However, as we passed Chelker Reservoir again, Ruth’s front light went out with a dud battery. We decided that it would be too dangerous to cycle all the way to Clitheroe, so I rang Val and asked her to meet us at Skipton Station. Ruth tucked in behind me for safety and as we carried on to Skipton, the temperature dropped like a stone.

In the town itself we had our second encounter with the police – a fast-moving patrol car stopped as it came towards us: the driver wound down his window, shouted “Have you seen an Audi going fast up here? Which way did he go?” Almost before we could answer, he dropped the clutch and sped off again – very exciting! 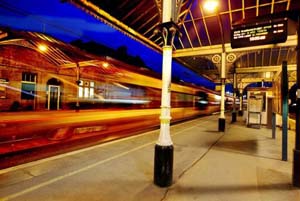 By the time we got to the Station we’d done 111 miles, so Ruth’s promise of doing 100 miles for Everyman Male Cancer was well and truly fulfilled. It seemed a nice thought that in the spirit of mutual assistance, men could raise money for women’s cancer while women could reciprocate by raising money for men’s cancers!

This morning my sore throat and runny nose have now returned but I’m glad I did this ride with Ruth. Not just because she was good company, or that the ride was pleasant, but I know how lonely it can be doing such a long stint all alone, with no moral support, when you’re not sure of the way, or things (like batteries!) let you down. Even though when I cycled the coast, much of the cycling was alone, I still had a support crew nearby and on call: it may sound a bit strange, but none of that journey was as lonely as a solo ride to York and back would have been.

Ruth isn’t far from her fund-raising target, and if you could help by making a donation at https://www.justgiving.com/RuthWarman-WillcycleforEveryman it would be much appreciated.
Posted by Bill Honeywell at 10:20