A Holiday At Last!

The title of this blog has to be a little ironic, but it is true that until last week I hadn’t had a holiday since January.  Providing you don’t count the ten weeks I spent cycling 4,440 miles around the coast of Great Britain!

With sunshine and warm temperatures normally somewhat lacking in the UK in November, we thought Malta might be a good bet, and it was somewhere we hadn’t been before.  I knew that the island – which is smaller than either the Isle of Man or the Isle of Wight - had a long and turbulent history, so I guessed it would be an interesting diversion rather than a sunbathing break. And as anyone who knows me will be well aware, I don’t do sunbathing (unless I’m doing something else at the same time!) 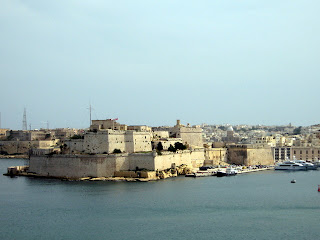 We had a great hotel (the Meridien at St Julians) – although being designated a ‘privileged guest’, when you know that each and every other guest is accorded the same status, can wear a bit thin at times!  We had an open-top ‘hop-on – hop-off’ bus tour, a harbour cruise (very good) and a few shortish walks, both in what little countryside there was, and around the city of Valletta and the towns of Senglea, Cospicua and Vittoriosa. 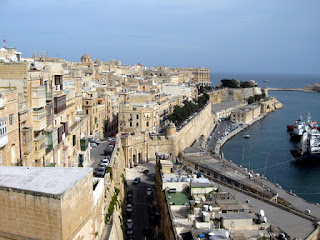 The Harbour at Valletta (again) 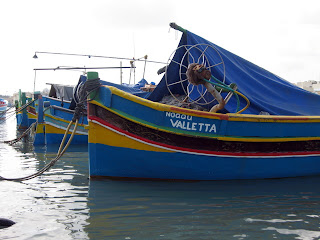 Traditional boats at the fishing village of Marsaxlokk
One of the highlights (you’ll like this!) was on Monday, when we took a ferry across to Malta’s companion island of Gozo and, during the course of our tour, visited the ancient site of Ġgantija, where an ancient stone temple pre-dates the Pyramids by over a thousand years and is reputed to be the oldest surviving building in the world.  As our fellow-travellers, Frank and Bern, paid their €5.00 entry fee each, I noticed the fact that there was a concessionary rate of €3.50 for those aged 60 and over, so when it was my turn I said to the lady behind the glass – as a light-hearted remark:  “I am very old, but my wife is very young.” 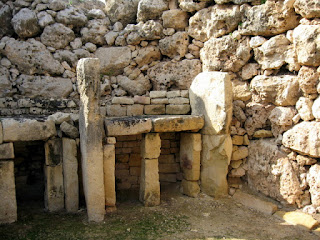 Ancient stones in the Temple at Ggantija, Gozo

With only a cursory glance she simply replied “Two senior citizens? €7.00 please.” Well, it seemed churlish to start an argument so I handed over a €10.00 note, received my €3.00 change and entered, stifling a giggle which at first I thought was of a childish nature but then I worried if it might be an early sign of senility…

Val, on the other hand, was not amused. 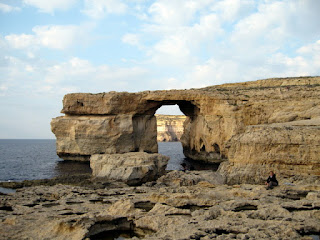 Spectacular scenery at Dwejra, Gozo
On our last day, yesterday, we walked around much of the Great Harbour:  the bus journey back was certainly memorable, as the traffic on the island is busy to say the least, and the bus itself was so packed there wasn’t even room for an anorexic sardine.  At one stop I’m sure I heard a voice near the back say “Excuse me, excuse me, excuse me… oh, sod it!” as the bus set off again! 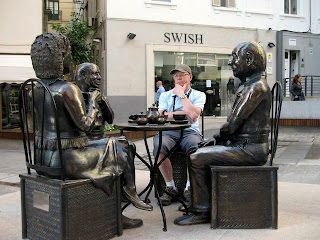 But is it Art?

Back to the UK in the early hours of this morning, feeling cold and with lots to catch up on, I still couldn’t resist a bike ride in this afternoon’s weak sunshine. 17 miles in just over an hour seemed OK, and my total mileage for the year is over 7,000, but it’s going to get more and more difficult to motivate myself to go out in the cold and wet. 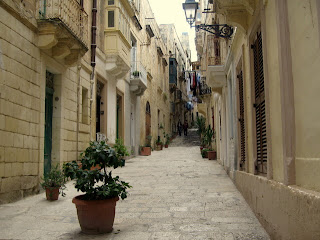 But I need to keep up the cycling – this year’s effort for Cancer Research UK was so successful that I would love to do something again next year.  The Just Giving site is still taking donations and if any persuasion is needed – whether to get out and do something special, or simply to make a useful donation - we only need to think of the friends who have been afffected by cancer to know that it’s something well worth doing.

If you are new to this blog, or even if you have donated already, please consider doing what scores of readers have already done and make a contribution to help Cancer Research UK continue with their vitally important work – thank you!
Posted by Bill Honeywell at 20:09