My First Audax – and a bit of a disaster!

Audax UK, according to its website, is the internationally recognised long-distance cycling organisation in the UK.  And by long-distance I mean anything from 50km to 600km.  The rides have a lot in common with many Cycle Sportives, but for some reason there are far fewer riders (despite the fact that they are much cheaper to enter).  Food isn’t provided but café stops are arranged; there is no en-route signage but adequate directions are given.

I hadn’t done an Audax ride before but Emma, a twitter-friend (@waterrat77), persuaded me to enter one last weekend – ‘The Dales Dance’, a 200k (125m) ride starting at Pendleton, just outside Clitheroe.  Not only were there 125 miles to do but the route also involved 10.000 ft of climbing over all those Yorkshire Dales hills! The 7.00 am start was softened by the fact that the clocks went back an hour the night before, but of course it meant that the ride would probably end in darkness – so I made sure I had some good lighting on the bike.

This was the first time I’d met Emma, who was already at the start together with her other friends from the Hebden Bridge and Todmorden area – Daniel, Richard and Phil, and after the formalities a total of 19 riders set off towards Settle in the morning gloom. My group were strong riders but I didn’t feel that I was doing too badly as we headed through Horton-in-Ribblesdale, Ribblehead, and on to Hawes. 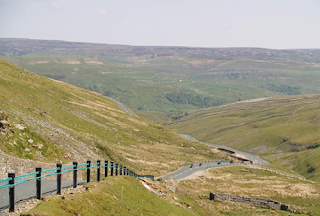 The weather, at first dull and drizzly, was beginning to brighten at last as we climbed the impressive Buttertubs Pass.  A café stop was scheduled for Thwaite, and I forgot that on the other side of the pass you have to turn left for the village before retracing your steps a quarter of a mile.  The fruit cake at Keartons Restaurant was stunningly calorific, especially with the slice of excellent Wensleydale cheese on top (despite the fact that we were now in Swaledale).

Onwards through Muker and along Swaledale through lots of villages, towards Gunnerside, then over the top again to Leyburn and Reeth.  Plenty of climbing but good fun, although when I saw a sign saying ‘3 miles to Catterick Camp’ I realised there must still be a good way to go.  The route now went through the village of Middleham (twinned with Agincourt – unusual, I thought) and climbed some more near Ellingstring before descending once more.

It was here that disaster struck.  At the bottom of a steep descent was a sharp left-hand bend over a bridge:  I realised I was going too fast for comfort but wasn’t worried because I thought I could just swing out a bit wide on the exit – that was, until the six motorbikes suddenly arrived, coming in the opposite direction!  I could see a collision coming and knew that if I tried to tighten my line I would probably come off and end up underneath one of the bikes, so I straightened up and sped across the face of them towards the wrong side of the (already narrow) road. Another tenth of a second and I would have made it, but with a sickening crunch the lead motorbike hit my rear wheel, buckling it beyond hope of further progress.

Having said that, a tenth of a second slower and it would have been my leg rather than the wheel, so I counted myself very lucky indeed.  There was no damage to the motorbike and neither of us was even slightly hurt, thank goodness.  One of the bikers turned round and went back up the road to tell one of my colleagues what had happened – there was about another eight miles to do before the next stop at How Stean Gorge so I asked him to carry on and let the others know of my plight, not that there was very much they could do.

I said good-bye to the bikers – who had been perfect gentlemen – and realised I had to get to How Stean Gorge somehow.  As I was ringing Val to put her on ‘standby’ I saw a Cherokee Jeep approaching, so not wanting to miss this opportunity I stood in the middle of the road and flagged him down rather than just extend a feeble thumb!  The driver was heading within half a mile of How Stean Gorge so kindly offered to take me all the way, where I was able to ring Val again and arrange a lift home with my sad-looking bicycle.  It was a shame to leave the other cyclists and a bit embarrassing later on as we passed them in the latter stages of the ride, but at least we got home before it was too dark, with no broken bones. 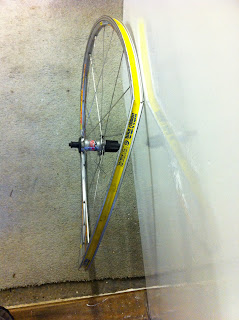 Oops! It's not supposed to be that shape...

As I write this on Friday the bike is repaired once more, with a gleaming rear wheel – ready for the 57-mile Cumbria Cracker this coming Sunday.  I may take those South Cumbria hills a little more slowly (on the downhill side anyway!)
Posted by Bill Honeywell at 20:30