Not the Tour of Mull Rally 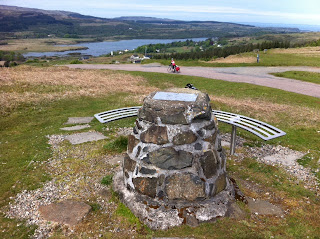 Tuesday was to be a long day, basically doing four of the best rally stages, visiting the island of Ulva and then cycling along the Ross of Mull to stay the night with Tony & Jean Wagstaff. For those of you who have no idea what I'm talking about, try Googling 'Mull Rally' or have a look on YouTube. I was a competitor for many years and the picture is a memorial to the founder of the event, the delightful Brian Molyneux, sadly missed.

We set a time of 44m 37s on Mishnish Lochs, between Tobermory and Dervaig, which shouldn't worry any of the drivers. Then on to 'The Long One' around Calgary Bay, from where, despite our many changes of direction, the wind seemed to be in our faces all day!

Every now and again we would stop so that I could show Richard another place where I had once crashed, which slowed progress considerably! We met three cycling ladies from Northern Ireland, stopped at the spectacular Eas Fors waterfall, and eventually reached the Ulva Ferry - summoned by sliding a board on the wall to reveal the red background. Very high-tec!
Posted by Bill Honeywell at 18:14