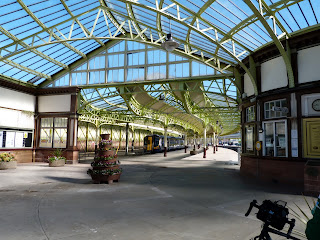 You’ve probably already read some of me blogs, but whether you have or not, I should say by way of a brief introduction that this is an account of 26 or so days cycling to all the reasonably accessible islands off the west coast of Scotland.  The aim was to set foot on 43, and as you’ll find out later, we almost did it. One island eluded us, and I’ll tell you why later.

Us by the way means me, Bill Honeywell (more information at the top of this blog), and Richard Dugdale, also from Clitheroe. Richard has his own blog which you can get to by following the link on this page.  We were cycling to raise money and awareness for Cancer Research UK and the Rosemere Cancer Foundation, so if at any time you feel the urge to make a donation – and I hope you do – then again, just follow the links given on this page.

I tried to update the blog as the ride progressed but I didn’t manage to give you much information as it all had to be done on an iPhone, and the photos were also only those taken on the phone. Now I’m home I can post some better pictures, taken on a Panasonic ‘bridge’ camera which was new for the ride and worked very well.

So, without further ado…  the story so far.

On Saturday 28 April we cycled from home to Preston station, caught the train up to Glasgow and booked in at the Travelodge on Paisley Road.  This is perhaps not the best location in the city – there was a security guard on the car park and before we’d been there an hour people were tweeting me to ‘be careful out there’! 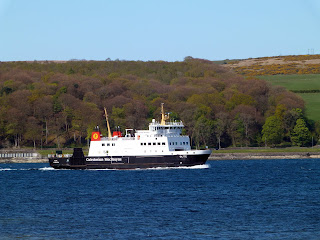 First thing Sunday morning we returned to Glasgow Central Station and caught a train to Wemyss (pronounced ‘Wimz’) Bay to get the Calmac ferry across to island no 1, The Isle of Bute, lying in the Firth of Clyde west of Glasgow.  The weather was glorious and the station at Wemyss Bay is a fine example of Victorian architecture.  It was a bit breezy on the crossing and we opted to stay inside the ferry and just look out of the windows!  There was another group of cyclists who were on a day trip to the island. 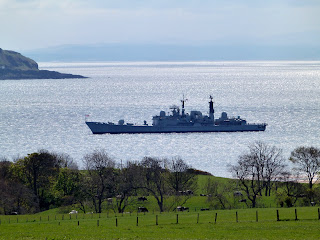 A Royal Navy destroyer anchored off the island

We decided to do a roughly clockwise tour of Bute so turned left off the ferry in Rothesay and… stopped at the first café on the edge of the town for the obligatory coffee and cake.  Then off along green lanes with birds singing and the sun shining, until we reached the ancient ruin of St Blane’s Church near the southern tip of the island. We left the bikes, walked to what is left of the church, and found a group of archaeologists doing a geophysical survey. No sign of Tony Robinson or the Time Team, however.  It’s a really pleasant, tranquil site where you feel you could sit down and put your feet up for a few hours. 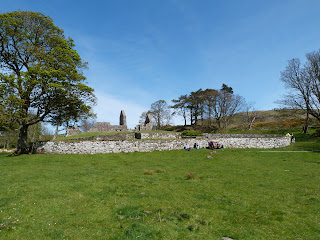 But of course we headed back for the bikes and set off again on our tour, past the lovely Scalpsie Bay on the west coast and then past another roof-less church to Ettrick Bay and another café stop.  From here, with the sun still shining, we headed back to the east coast and then north along a long cul-de-sac by the Kyles of Bute to Rhubodach where another ferry makes the short crossing to Colintrave on the Cowal peninsula.  We saw Eider ducks in the sea here, and there were also Gannets, Common Sandpipers, Oystercatchers and Swallows. 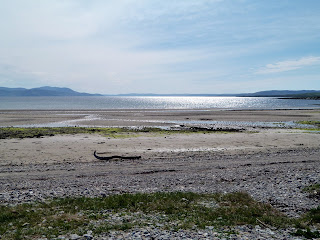 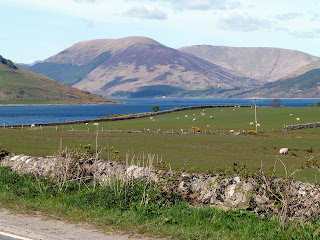 View from the Kyles of Bute 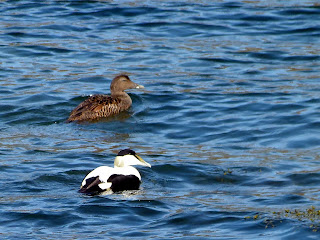 A pair of Eider Ducks

Then back to Rothesay where, at 5.50, we called at one of Zavaronis’ cafés, but were told he was about to shut, so we got a coffee ‘to go’ and then did a tour of the town.  On our way back past the café at 6.30 he was still open… hmph! 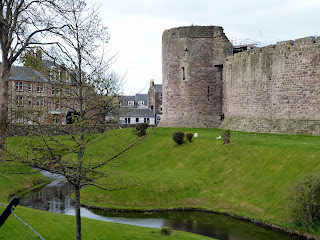 Our night’s lodgingw were to be with Frank Ledwith via warmshowers.org, a site which enables touring cyclists to provide accommodation on a reciprocal basis.  Frank had been in Lancaster all day and didn’t return till just after 7pm, but gave us a warm welcome and a warm meal too!

So ended our first day – the first of many – with one island and just under 40 miles in the bag.  Tomorrow we would add another two – Great Cumbrae and Arran – and a fellow tweep, Tommy Gribbon, had promised to join us on part of the cycle.
Posted by Bill Honeywell at 21:16