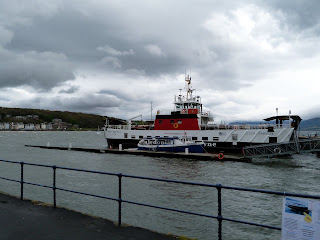 The Bute Ferry at Rothesay

Day 2 dawned grey and windy;  I was first into the kitchen and tucked in to some cereal, and unable to find proper milk I used soya milk instead – it’s actually rather good! Our host Frank then appeared, telling us that there was an ‘amber alert’ warning that the ferry might not run due to the high winds. However, when we got to the terminal, the ferry was definitely running – but this was perhaps the first time that it had occurred to me that at some state we might get ‘ferry disruption’…

Once we were back on dry land, it was an easy run from Wemyss Bay to Largs with a helpful tailwind.  Nardini’s is an iconic Art Deco café and we couldn’t pass without calling in for a cuppa.  Just like the previous Big Bike Ride last year, I was contacted on Twitter by other cyclists who wanted to ride with us for a while. This time it was Tommy and Euian who had ridden up from the Ardrossan area to be with us and keep us company on our second island, Great Cumbrae. 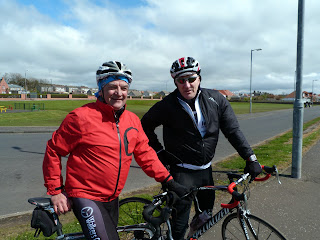 Don't mess with these guys! - Euian and Tommy join us for Cumbrae

It was a short journey on choppy seas, and when we got to Cumbrae the clouds were black and the winds quite fierce.  The idea was to do an anticlockwise lap of the island before returning and then continuing to Arran.  The roads on the island were quiet, though I was assured that during the Glasgow Fair week they would be anything but! 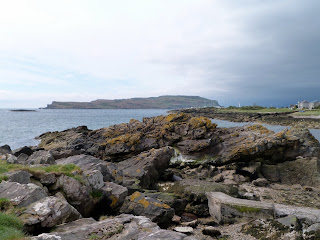 The west coast was quite spectacular with great views over the weathered red sandstone rocks along the shore.  Millport, the main town, looked a wee bit tired in places but at least there was an interesting machine outside the bike shop!  Our last few miles back to the ferry were into the teeth of a fierce cold wind, and when we looked at the sea we wondered whether the ferry might be held up, but we had no need to worry – even though at one stage we thought the ‘bus shelter’ for waiting passengers might blow away! 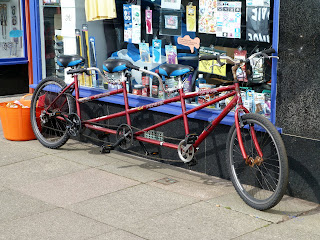 For a moment I thought The Goodies might be in Millport...

After lunch in Largs the wind direction changed, troubling us with a gale-force cross wind on the 12 or so miles to Ardrossan, where the ferry to the Isle of Arran would depart.  We said goodbye to Tommy and Euian, then arrived at the ferry terminal where we bought our tickets and joined the mix of all kinds of different people in the waiting room (it was too cold and windy outside!) 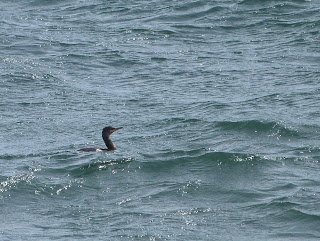 This, folks, is a Shag. A bit like a Cormorant.

Brodick, where the ferry arrives on Arran, is a strange place – it doesn’t feel like a town, more a random collection of hotels, houses, and a few shops including a big Co-op supermarket.  We stopped for a coffee at a café-cum-outdoor shop, and when the owner saw that we were raising funds for Cancer Research he gave us back our money as a donation. 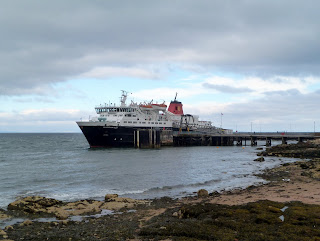 The Arran Ferry at Brodick

Then off to our digs for the night – this time, arranged by the local Minister via Twitter at the home of one of his congregation – the friendly John Roberts, who made us a great evening meal and provided us with a comfy separate bedroom each.  I repaid him by breaking the towel rail in the bathroom, but we soon mended that for him!

Not a big mileage today – less than 30 miles on the bikes – but two contrasting islands, and now we were looking forward to a tour around the Isle of Arran tomorrow.
Posted by Bill Honeywell at 22:42