Cycling the Hebrides 2012 – Day 5: Heaven is the Island of Distilleries

It wasn’t quite like Groundhog Day but at least I woke up in the same bed as yesterday morning, which in itself was a bit of a novelty.  From Suse and John’s house it’s only half a mile or so to the ferry terminal at Kennacraig, from where a fairly big Calmac ship plies the route to the island of Islay, carrying a good number of HGVs.  Usually the ferry alternates between two ports on the island – Port Ellen and Port Askaig – but due to work which is being carried out at Port Ellen it currently goes to and from Port Askaig only, about a two-hour trip.

The day started overcast, dull and cold, but we hadn’t sailed far before the sun came out. The warm, sunny, sheltered rear deck contrasted with the shady, windy, cold bows of the ship.  It was warm enough as we arrived at Port Askaig, and got even warmer as we cycled up the long steep hill out of the village.  Straight away we passed signs pointing to the distilleries at Bunnahabhein and Caol Ila.  The scenery was green and agricultural, and there was a gorgeous view back to the Isle of Jura, which is just across a narrow strait from Port Askaig. 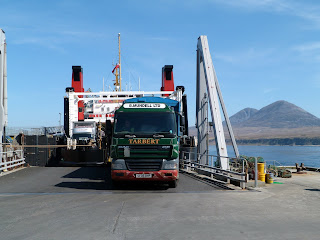 At Bridgend we turned right towards Loch Gruinart (where there is an RSPB reserve), past an odd-looking standing stone in the middle of a ploughed field, and then across rougher and wetter ground, where Lapwings were displaying and Mute Swans fed serenely on patches of water. 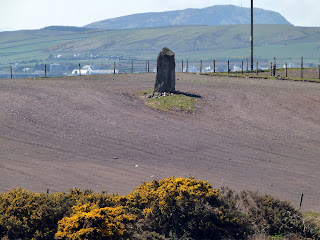 We talked to a birdwatcher who had been mesmerised by the sound of Corncrakes the previous night, then called at the RSPB reserve centre.  I’ve probably said this before, but it IS a small world:  the lady manning the centre was Susan Hall, who originated from Lowerhouse near Burnley and is a good friend of our good friends David and Janet Barritt.  Greetings were exchanged over a cup of coffee and I borrowed Susan’s scissors to tidy up some loose ends on my cycling pants. 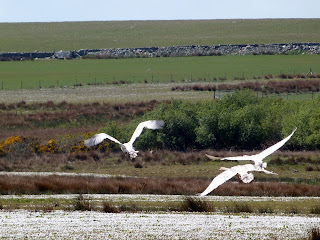 We set off into a moorland setting, with Stonechats and Wheatears everywhere, and then a gorgeous male Hen Harrier made an appearance, a beautiful pale grey with black wing tips, smaller-bodied but longer-winged than a Buzzard. A true bird of the moors whose only breeding site in England is near our home, in the ‘Forest’ of Bowland (the name is misleading as Bowland is moorland too). 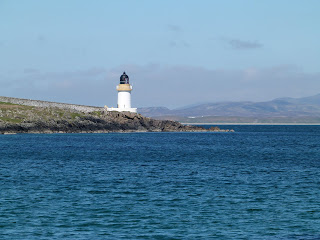 The lighthouse at Port Charlotte

Reaching the coast we turned right for Bruichladdich (another distillery) and Port Charlotte, with its pretty harbour.  We had wondered about buying a bottle of whisky at the distillery shop but with the top-priced ones at £200 and no room in our panniers we decided against. 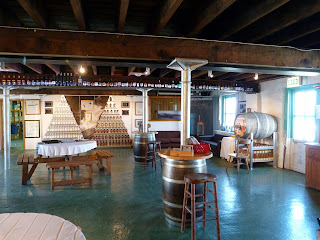 Like being let loose in a candy shop - Bruichladdich 'Visitor Centre'

Then on to Bowmore (yes, another distillery!),  a really pretty harbour village with a main street overlooked by church at the top of the hill (it reminded me of some French towns like Angers) and the harbour at the opposite end. We had an appointment to visit the local island newspaper – The Ileach – for a quick story and photo-shoot. I made a great impression with the front of my shorts unzipped (it must have been like that since I tidied up the loose ends!) but all was returned to decency and decorum for the photograph. 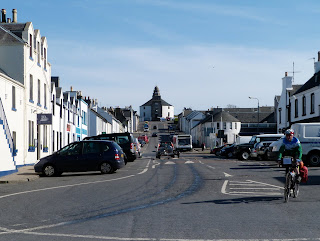 Down at the Harbour Inn we had a quick coffee and I got into Spanish conversation with Maria, the waitress who was from Galicia.  Trabaja mucho en el hotel pero se gusta la Escocia.  Oh yes.  I noticed some Japanese gentlemen with carrier bags containing bottles of Bowmore whisky, settling their hotel bill and charging it to Suntory, a Japanese whisky company.  (I’ve checked, out of curiosity, and Suntory do ultimately own the Bowmore distillery.) 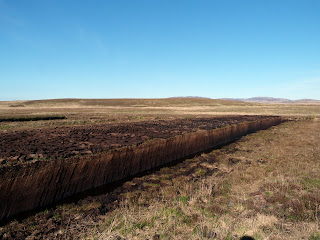 Now for a long straight road stretching almost nine miles to Port Ellen, with the wind behind us fortunately, past peat cuttings and the island’s airport (where one of the Japanese gents was standing outside having a quick fag).  Coming in the opposite direction we met a man from Exeter who was riding a strange Danish bike, half-tandem, half-grocer’s bike, with all his camping gear and a small dog sat on top.  It looked a great outfit and the dog was getting a free ride for no work! 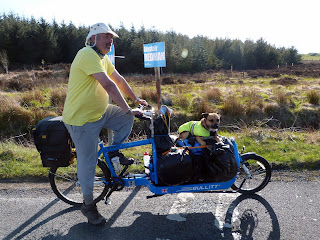 The Bicycle - it's the future!

Our friends Gerry and Linda were holidaying in a luxury cottage on the Oa peninsula, and when I found out I sort of invited us to stay (Gerry and Linda are actually incredibly hospitable).  So we turned right on to the Oa peninsula and then after the final steep hill of about 1 in 4 (I had to get off and push as my front wheel was lifting right off the ground and I was in danger of falling off backwards) we found the house and couldn’t believe our luck.  What opulence! What luxury! What a view! And as well as alcohol and a prepared meal, we got the laundry done too!  We were in danger of suspending the cycle and staying here for the rest of the week! 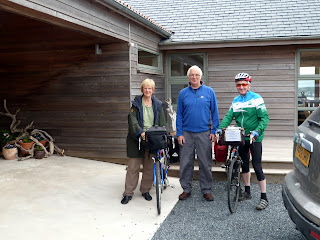 Gerry and Linda entertain...
Posted by Bill Honeywell at 20:19