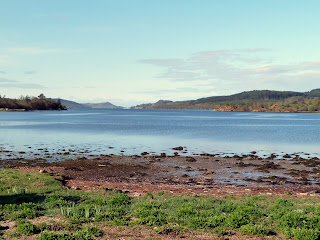 The wind didn’t seem as bad as forecast and after leaving Suse and John for the last time we made good progress past Tarbert and on to the shores of Loch Fyne. We passed a bus shelter where I remembered sheltering from a cloudburst last year, and a road-kill deer in the verge.

Another view of Loch Fyne

In no time at all we had arrived at Ardrishaig – but we still stopped for coffee and scone! 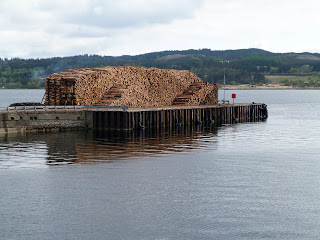 This is where you would come if you were travelling from Glasgow to Fort William or Inverness before the railways – steamer to Ardrishaig, then through the Crinan Canal, steamer to Oban and Fort William, and last the Caledonian Canal to Inverness. Who needs roads?  There is still a bit of activity as the enormous pile of logs testified. 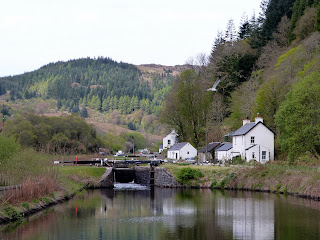 The scenery as the road follows the Crinan Canal is drop-dead gorgeous, although the road sign soon afterwards is a bit confusing… 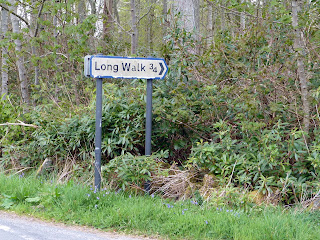 I thought it was cold and as we were greeted by a light snow shower soon afterwards, I reckoned I was right!  Once we rejoined the main Lochgilphead to Oban road the hills started – one after another, through Kilmartin and other villages – funny how I didn’t remember the hills much from last year – perhaps it was the lighter bike I was using then which made them easier.

Despite the fact that we were on a main road there were very few watering holes, but we managed to find one with a great view towards the southern end of the islands we were soon to visit. It was a bit worrying to see the time going by, realising that we had barely covered half the day’s planned distance. 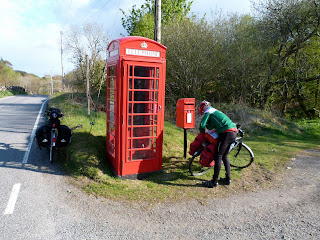 Nearer to Oban we turned left towards Seil Island, and almost straight away I saw a steep hill sign. It occurred to me that we could travel a bit faster if we could get rid of the heavy panniers and collect them on the way back, so spotting an empty phone box we put them in there. It was only an hour or so afterwards that the thought occurred that the police might not take too kindly to such activities. Still, I reckoned the chance of getting the bags blown up was pretty remote, as we were, well, pretty remote I suppose! 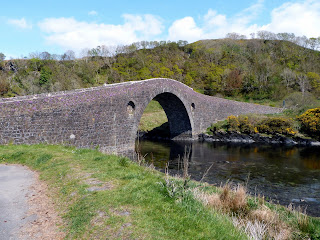 Bridge over the Atlantic, Seil Island

So, more hills and then the steepest hump-back bridge you ever did see, otherwise known as the ‘Bridge Over The Atlantic’ – and we were on Seil Island, passing a pub called the ‘Tigh na Truish’ or ‘House of the Trousers’, so called because after the Jacobite Rebellion local soldiers were required to remove their kilts when they left the island and put on trousers.  I don’t know what they would have made of Lycra back then. 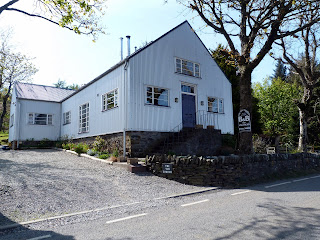 Seil Island has lots of bungalows with pretty front gardens – I guess it’s a popular place to retire to.  We reached a junction where it was right to Easdale and straight on to Cuan Ferry for the island of Luing, so we tossed a coin and turned right. Up another hill with a former church at the top now converted to a B&B – and made completely out of corrugated iron (hence the name ‘The Tin Church’ I guess), then down to the village of Ellanabeich for the wee ferry. 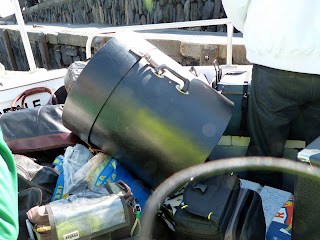 A car arrived at the same time, carrying masses of musical instruments and sound equipment – the band ‘String Driven’ were playing at the Easdale village hall tonight. 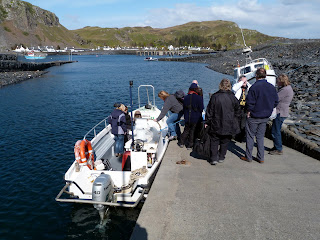 So we acted as impromptu roadies, helping to get all the stuff on to the tiny boat, then thought we’d better jump on or there wouldn’t be room for us!  The journey across the narrow sound takes about 30 seconds – you could almost skim a stone across… 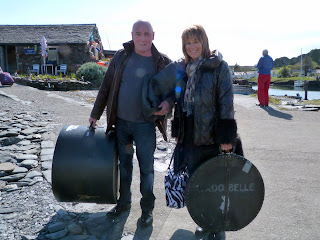 …which is a coincidence because the World Stone Skimming Championships take place on Easdale Island every year.  The island is basically one big worked-out slate quarry, and one of the old workings, now filled with water, hosts the competition.  The rest of the island is rather odd, with lots of sheds filled with rabbits and budgerigars. All quite strange, and also capable of being visited in about ten minutes, so when the ferry came back with the rest of the rock stars, we returned to Seil Island, retraced out steps to the junction, and this time turned right for Luing. 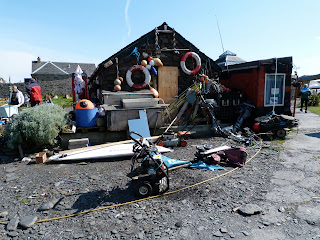 Cuan Ferry needs a traffic warden.  Cars were parked all over the place, presumably abandoned by people going across to Luing for the day. It was a nice day for it by now, sunny and warm.  The small car ferry comes in at one angle to let the cars off, then backs away and docks again at a different angle for the new cars to get on. 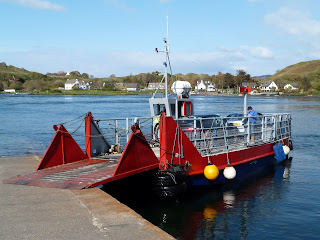 We only rode half a mile, if that, from the slipway, and, having had a very brief look at the place and being conscious of the time, we returned again.

On our second pass we decided to call in at Tigh na Truish for a coffee, before heading over the Atlantic Bridge and then collecting our belongings (safe, sound and definitely not exploded) from the telephone box. Dr Who would have been proud of us.  A few miles more to Oban, then a stop at Lidl for some provisions and a bottle of wine before a further 5 miles to our final destination – North Connell. We were stopping chez Dave and June Bleazard but they were away on a kayaking weekend at Tayvallich. However, we’d arranged a key and there were a few notes telling us where everything was, and after a quick shower we found the local pub and managed to get an evening meal.

Today had been the longest day so far, with three islands, 84 miles and nearly 2,000 metres of climbing.  Coll tomorrow, with a 9.00 am boat from Oban meaning an early start as we had the five miles to cycle back again, but it would be a much less demanding day, that’s for sure.
Posted by Bill Honeywell at 20:34