Before I go any further I should point out, for the avoidance of any confusion (which can be caused by the date at the top of the blog!) that I am now writing a more detailed account of the Hebridean Cycle which Richard Dugdale and I completed on 26 May, but due to restrictions on the amount I could carry, I had no laptop and had to rely on my iPhone to post rudimentary blogs, using only photos taken on the phone.  As I took lots more photos, some of them not bad even though I say so myself, I wanted to follow up with blogs containing more detail and more photos – so this is it. I hope you enjoy it – if you do (or don’t) feel free to post a comment at the end.

After tearing ourselves away from Gerry and Linda’s hospitality we cycled into Port Ellen, where there is a big maltings factory serving various distilleries, and then went to have a look at the Laphroaig distillery where there is a rather confusing road sign – perhaps they’d had a few when they made it? 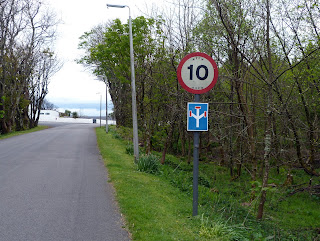 Which way? - the road to the Laphroaig Distillery

It was cold and grey, and as we turned back to head north back up to Port Askaig the wind was once more in our faces, and feeling pretty relentless. It was a long ride up the middle of the island and it felt like it would take all day.  There were a few Buzzards, Goldfinches, and I saw a Chough, a rare red-billed crow with a call that sounds like a cross between a Jackdaw and a ricochet.  The countryside was bleak, with the occasional farmstead and no traffic at all. 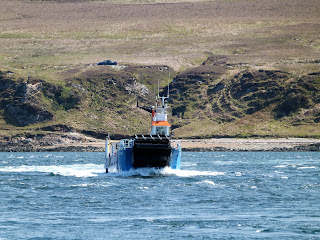 The Jura ferry battling against wind and tide

Eventually we arrived at Port Askaig with just enough time for me to nip to the loo before the ferry across the narrow sound to Jura.  But when I came back out, with five minutes to spare, the ferry had gone!  We hadn’t realised that they use the timetable as merely a rough guide.  It looked like we were in for a wait of over an hour, although it turned out that they decided to do the 1310 crossing at 1300.  This ferry is run by Argyll and Bute Council and the operators seem a little surly.

Mind you, perhaps they had good reason, because the combination of strong winds and a fearsome tide through the narrows made navigation a tricky affair – the boat seemed to be sideways most of the time and looked like it would miss the landing stage.  There was plenty of construction work going on at a hydro-electric scheme on the Jura side, so plenty of big wagons on the tiny ferry. 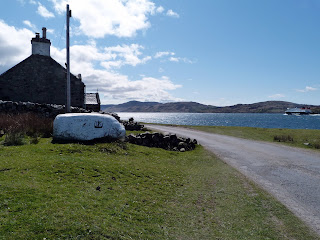 Feolin, the first port of call on Jura

If you look on the ferry website you’ll see that it runs to a place called Feolin on Jura. This consists of one or two houses only.  In fact Jura, despite being quite a big island (the fifth biggest Scottish island, I think), has very few houses altogether – fewer than 100 people live on the island, making it the most sparsely populated piece of real estate in the country, I reckon. 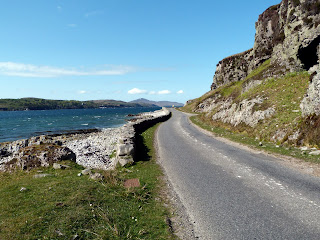 Looking back along the Jura coastal road - the picture doesn't do it justice! 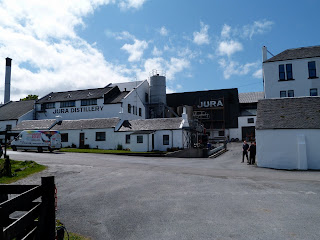 The Jura Distillery at Craighouse

But the first mile or two of road on the way to the ‘capital’ of Craighouse are absolutely totally unbelievably beautiful, looking out over the sea and back to Islay and across to Kintyre.  After that it became another bit of a slog over moorland for the eight miles or so to yet another distillery – Jura malt – the pier and the little cluster of houses that makes up the village. Fortunately there is a tearoom so we had the obligatory cuppa and scone.

The distinctive hills known as the Paps of Jura dominate here. Richard recalled that sad day in 1993 when four of our friends were killed when their plane crashed into the mountains en route to Mull.  Richard should have been on that plane but had to cry off at the last minute, so he must still have a strange cocktail of feelings – sadness mixed with personal relief I guess. 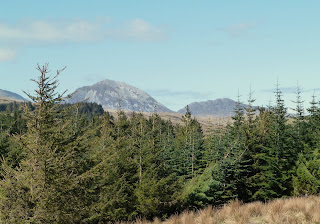 The Paps of Jura from near Craighouse

We turned around and cycled back to Feolin, where the contractors were all getting ready to leave for their weekend off.  The ferry really struggled to berth (the tide was now running in the opposite direction) but we made it, although not without the bikes getting a good spraying of salt water. 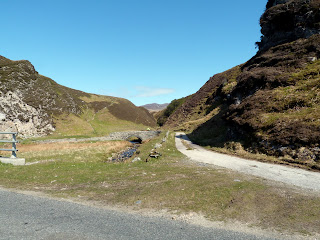 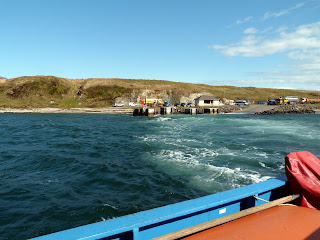 On the way back to Islay

After a brief wait in Port Askaig we boarded the big ferry back to the mainland, and after the two-hour crossing we were soon back at Suse and John’s house. Their daughter Emily was visiting with her husband (also called Richard). He is planning to cycle from Land’s End to John o’Groats later this year so there was no shortage of conversation over dinner!  The following day they were planning to do the Gigha Challenge, while we had a long day ahead – 80 or 90 miles to Oban, via Seil Island, Easdale and Luing – and with full panniers and a headwind, it could be hard work!
Posted by Bill Honeywell at 20:23