As soon as we had had breakfast and bid farewell to John, our genial host, we cycled to the Tourist Information Office to check whether there were any earlier ferries to Holy Island, as according to my information the first one was at 11.15 which meant we wouldn’t get back on to Arran until 1230 and I thought that might be cutting it fine to get the last ferry off the island from Lochranza.  As luck would have it the new timetable started today, the first of May, with a 10.00 crossing. Excellent! 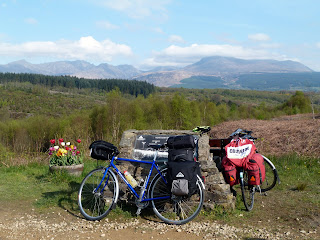 Looking to the hills of Northern Arran

It’s a long, long hill out of Brodick towards Lamlash (pronounced Lamlash) but the view back from the top towards the fells is worth the effort.  Our earlier euphoria was quickly dashed when we arrived at the quay for the ferry to Holy Island, where the notice announced that there would be no sailings at all today due to high winds. 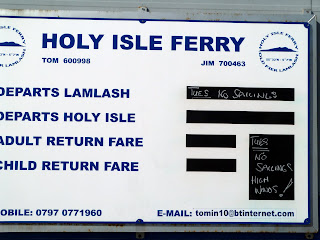 We stood around lucking downcast.  The man - who we thought operated the ferry - asked why we were so glum and we explained that we were doing a charity bike ride to 43 islands and we were disappointed to fail at only no.4.

“So if you miss one, does that mean you get no sponsorship money?”

“Not exactly, I replied, but it would still be a shame not to get there.” I replied. 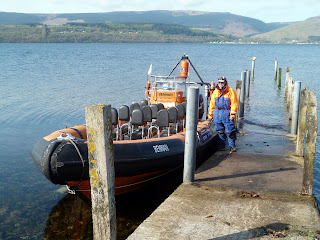 Russell and the Ocean Breeze RIB at Holy Island

It turned out that this was Russell, owner of Ocean Breeze Powerboat Tours (http://www.obrt.co.uk/) and he has a big RIB (Rigid Inflatable Boat). And, as he explained, he didn’t have much else to do right now, so he would take us across to Holy Island for free, as his contribution to our fund-raising effort for Cancer Research.  So we climbed into his rather large boat and Wow!! Off we set at about 100 mph, skimming over the tops of the waves to Holy Island!  We arrived at the little jetty about two minutes before we had set off (!) and jumped off to have a brief look. 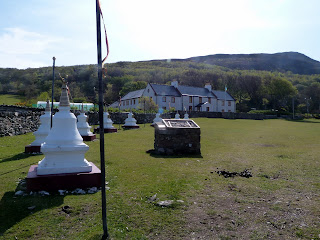 Holy Island is now a Buddhist Retreat but was formerly the site of an early Christian monastery, having been the home of St Molaise during the 7th century AD.  Later we sailed by the cave where he used to live.  There are wild ponies on the island too. 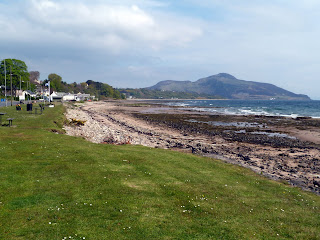 Holy Island from the 'mainland' of Arran

Soon we were whizzing back to the pier at Lamlash and, having thanked our kind benefactor, we remounted our bikes and set off around Arran again in a clockwise direction.  The island here is green and lush, much like the mainland, and the land is undulating.  We found ourselves gradually climbing, and then at a junction we turned left and dropped steeply to the village of Kildonan, with the lighthouse on the small island of Pladda dominating the view.  Having gone through the village, of course, there was only one outcome – a big steep hill back out again! 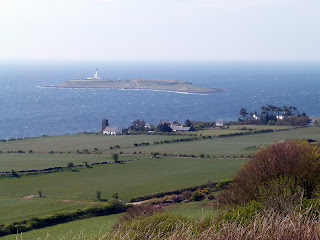 The lighthouse on Pladda and Kildonan village

We found an inn at Lagg (I think it means ‘dip in the ground’) and stopped for coffee and scones with a jovial hotelier and equally jovial people on holiday from Hull, before carrying on around the coast, on a road which was feeling more coastal and less farmland, and by the time we got to Blackwaterfoot (lunch!) the scenery had competely changed to much more dramatic, and attractive, coastline. 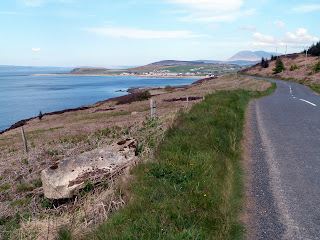 There was one golf course, however, with a sign that indicated a more laid-back approach to life than at some courses on the mainland... 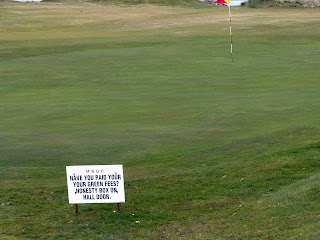 I doubt whether they have a car park attendant either. 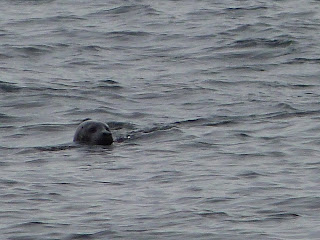 A common seal (I think)

After lunch we noticed more wildlife, with seals, oystercatchers, shelduck, sandpipers and, a little further out to sea, a few Great Northern Divers which had not yet flown to the Arctic to breed.  The shore was bouldery and quite dramatic in places, with a few interesting rock formations. 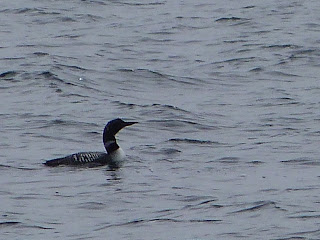 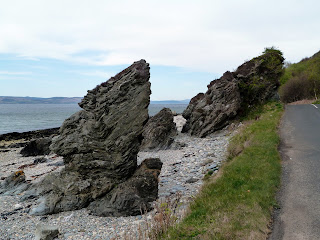 By the time we reached Lochranza the folks at the Sandwich Station (recommended!) had already heard of our presence via Russell, the Ocean Breeze Skipper, via Twitter.  Well, it beats Jungle Drums.  It was quite chilly and as we stood on the slipway waiting for the ferry, getting gradually colder and colder, I tried the door to the Calmac waiting room and found that it was open.  I was to learn that they are almost always open, even though often they are unstaffed. 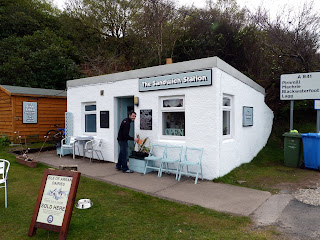 The Sandwich Station at Lochranza 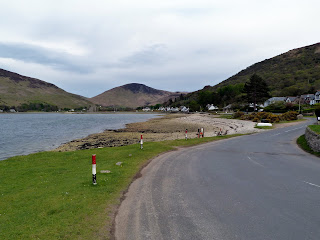 Back on the mainland of Kintyre ("Scotland’s only mainland island”, as the tourist blurb announces) the ferry terminal at Claonaig consists of nothing more than a public car park and a bus stop.  From here it was a matter of crossing to the other side of the peninsula (past the interestingly named house called Spion Kop and listening to cuckoos calling for the first time this year) to the main road just SW of Tarbert, before going in search of Suse & John’s house where we were to be looked after tonight.  I travelled on this road last year on my cycle round the coast, in the opposite direction. 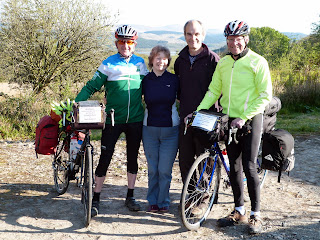 Suse and John, our hosts for three nights altogether

We overshot the entrance to the house and toiled (uphill, of course) for nearly a mile too far but eventually we arrived to a warm welcome. John and Suse are keen on orienteering and kayaking, and have recently built the house on ecologically-sustainable lines – most of the heat comes from the sun and there are lovely features like larch cladding and lime plaster.  And warm showers, of course! 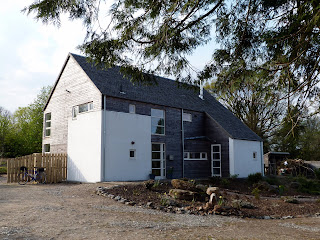 Another day, another island in the bag. Although four doesn’t sound too impressive yet, we could so easily have been stuck on three. Perhaps it was Karma that got us to the Buddhist retreat!
Posted by Bill Honeywell at 17:56