The Christmas Cracker Draws Near

Last year I was persuaded to do the Epic Events Cumbria Christmas Cracker Cycle Sportive – 60-odd miles of country lanes in South Lakeland in the middle of December. The weather was bitterly cold (and boy do I feel the cold) – so bad in fact that the first section over Red Bank at Grasmere was cancelled due to ice and the ride re-routed through Ambleside. Having arrived at the start all warm and toasty, the hour’s delay left me frozen to the bone and it wasn’t until I’d been going ten miles that I began to feel my fingers again. I don’t think I felt my toes all day.

So this year I’m doing it again (I’m suffering from a severe lack of brain cells – or was it the promise of free Christmas Pudding at the finish?) It’s on Sunday December 5th and starts at Grasmere Village Hall, and joining me from Clitheroe will be Richard Dugdale, Mick Bryan, Steve Hollingsworth and Alan Taylor. Of the 500+ entrants, only 25 will be older than me, although two of those will be Richard and Steve! Then we’ll see if the recent gym training has done any good… Somehow I doubt it – not that Steve at Lee Carter has been doing anything wrong, but, as the saying goes, you can’t make silk purse of a sow’s ear. My body seems to be built for long, slow plods and doesn’t appear to want to change! Meanwhile I’ll be putting some information about Cancer Research UK on the Blog soon, and I had a flutter of excitement last week when Chloe from Motorhomes and Motor Caravans Magazine emailed me sounding very positive about the Round Britain Ride and optimistic that we might find a motor home somewhere. I’m now waiting for news from her Editor, so keep your fingers crossed!
Posted by Bill Honeywell at 15:37 No comments:

Getting down to work

Now I’m back home for the rest of the year and need to make some real progress in several areas. Firstly, to flesh out more details of the route. This hasn’t been helped by the fact that I seem to have lost the section of route from Newport, South Wales, back to the finish! That’s the problem with using a PC and a laptop at the same time – I must have overwritten the newer file with an older one. Never mind, that won’t take long to rectify. Then there’s publicity. So far I haven’t made progress with BBC's Inside Out or the One Show, but I’ll keep trying. I might have more success if I concentrate on the regional BBC News and Radio programmes. I’ve definitely decided that I will be raising funds for Cancer Research UK and yesterday I met their Area Volunteer Manager supporting local fundraising, Sarah McPhee. She couldn’t be more enthusiastic, which is brilliant. She will be my main link with CRUK and hopefully between us we should be able to maximise the amount raised by the bike ride. She couldn’t promise to find a motorhome but I’ll keep working on that!! Finally I need to get myself fitter. Vicky Lee from Clitheroe’s Lee Carter Health Studio kindly promised that Steve Backhouse will knock me into shape. I met

him this morning so that he could put me through my paces and realise what a big job he has!! Suitably inspired I went out and did a fast 26 miles in this afternoon’s fantastic weather. Tomorrow morning (weather forecast dire) will see me in the gym trying to remember all the squats, lunges and what-have-you that Steve (not realising the short-term memory loss of a 58-year old brain) tried to show me this morning. There's going to be some blood sweat and tears...
Posted by Bill Honeywell at 19:49 No comments: 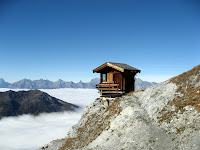 I had a great weekend break in Switzerland last month courtesy of James & Jill Alpe (they really are called Alpe!). Day one was gorgeous, with blue skies above and the white tops of clouds below: a tough climb up to the Greppon Blanc at 2,700m followed by a great ridge walk. Day two was in snow and included the phenomenal Ancien Bisse de Cherve, a narrow path clinging to the mountainside with some pretty long drops off, and day three was a pleasant valley walk. Now I’m back home for the rest of the year... - see the next article!
Posted by Bill Honeywell at 19:39 No comments: