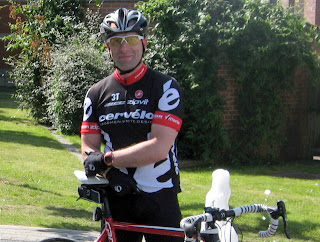 What a sad day.  Dave Hargrave from Sunderland died last night. When I heard the news first thing this morning I couldn't believe it.  Here's Dave in Sunderland, the day I met him on my GB Coastal Bike ride - the blog from that day is http://billhoneywell.blogspot.com/2011/06/day-31-seaton-sluice-whitley-bay-to.html

Until April I had never been on Twitter, but thought it might be a good site to make people aware of what I was doing on the big bike ride and keep them updated with progress.

I was soon followed on Twitter by Dave, and his friend Craig Stephenson (@chewbikker) and found his tweets amusing and encouraging in a kind of way.  As I approached the north-east, having battled my way through Scottish gales, Dave tweeted to say he'd try to join me for a few miles.

I didn't expect to see him to be honest - people often promise but don't fulfil, and I'd had the same kind of message before, only to result in a no-show.  On a beautiful Sunday, 12 June, my route was Whitley Bay to Runswick Bay, and for a change I had company - my son Mark, his best man Chris Toop, and James and Jill Alpe from my home town of Clitheroe. A record turn-out.

Good to his word, Dave (with Craig) found us at South Shields, and then cycled with us through Whitburn, his home town of Sunderland (which he knew like the back of his hand and clearly loved), then on to Seaham where we stopped for food and drink at our motorhome. I'll never forget how he loved the fruit cake made by my sister Pat, insisted on sending her a tweet, with a photo, and then asked for the recipe.

Afterwards he kept in touch and we nearly met again on an organised ride from York, but he was delayed at the start and I didn't see him again.

He was so enthusiastic about everything - he loved his bike, his local area, his family, life, everything. I felt like he should be an ambassador for - well, the human race almost - he was clearly such a gentleman.

All I know so far is that he was cycling home from work in Newcastle to Sunderland yesterday evening, and somewhere in Sunderland he had a sudden heart attack.  I don't think any other vehicle was involved, although early reports spoke of a collision with a bus.  His last tweet was "Just had a pret chocolate pudding. That'll make me good n lean. Aww what the hell eh. I'll ride it off at 6pm." Typical humour from the guy.

Cycling - and the north-east - lost a real gem of a man yesterday. How can I be so close to tears when I write this?  That's the effect Dave must have had on everyone.  My sincere condolences to his wife Hannah and their three young children. RIP fella. Ride safe everyone.
Posted by Bill Honeywell at 21:02 No comments: