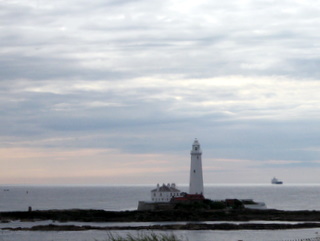 Dawn saw Mr Toop emerge from his tiny tent by the motorhome and fold it into something only slightly larger than a postage stamp. Chris and I set off to collect Mark from his luxurious B&B (?) in Whitley Bay, where we were also joined by James and Jill Alpe from Clitheroe who are doing the next three days with me. 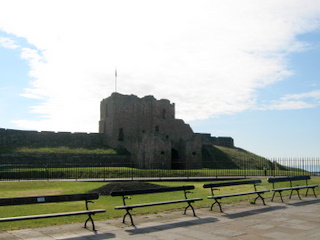 Tynemouth Castle
I’d had a couple of ‘tweets’ from two cyclists who live around Sunderland – Dave (@roadbikedave) and Craig (@Chewbikker) – and they came out to meet us at the South Shields side of the Shields Ferry.  The only problem was… that when we arrived at the North Shields side, at 9.10, we found that it wasn’t running until at least 10.00. So we had to do a detour to the Tyne Tunnel, where there is the most amazing side tunnel solely for pedestrians and cyclists, complete with vertiginous wooden escalator! 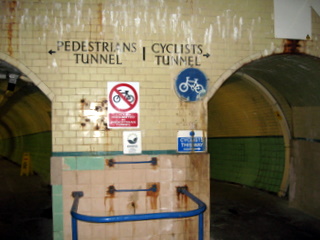 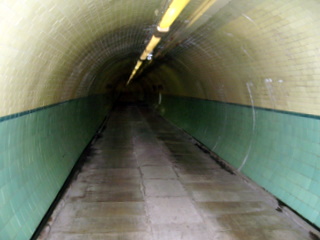 On our back to the other side, the two gallant tweeters found us, introduced themselves, and promised to be our guides as far as the first brew stop at Seaham.  Opposite the Ferry was a large cruise ship – aboard which, it turns out, was my big brother captaingreybeard.com, aka John. No doubt still in bed. 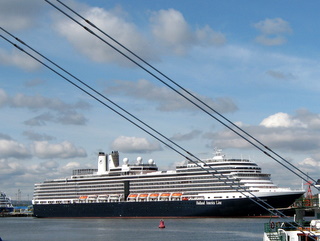 The weather was bright and sunny as we passed through South Shields, where the Great North Run ends, and today was the Great North Dog Walk!  Then to Sunderland and over the River Wear, for a photo shoot at a very pretty fountain.  For the first time ever in several thousand miles, I caught the lace of my shoes in the bicycle chain – luckily for me I wasn’t tipped off the bike, as the lace snapped straight away. 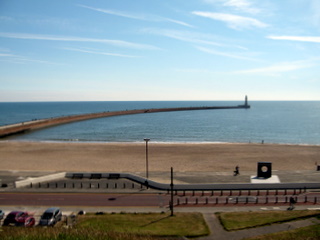 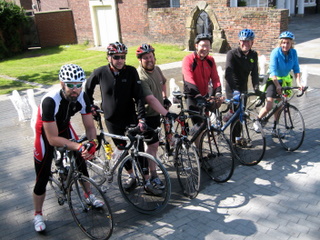 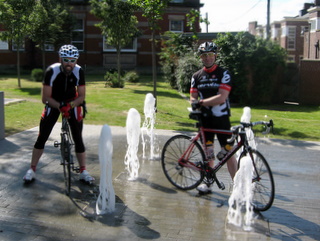 Craig and Dave
When we had our first stop at Seaham, when Dave and Craig bid a fond farewell and set off for Durham, after enjoying some of sister Pat’s finest fruit cake.  From here we turned inland, passing through well known colliery names like Easington and Blackhall (where a paraglider seemed to be ‘practising’ just off the main road!). On through Hartlepool to Seaton Carew for another quick stop, where the wind off the sea made it freezing cold. 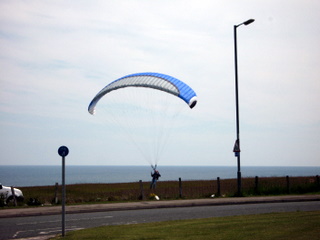 Now we were really in modern industrial landscapes – vast areas of chemical plants and the like (dad used to work at Billingham ICI for a while, but I doubt he would recognise any of it now). Our plan was to cross the Tees on the Transporter Bridge, but, for our second disappointment of the day, this too was closed and another detour made necessary. 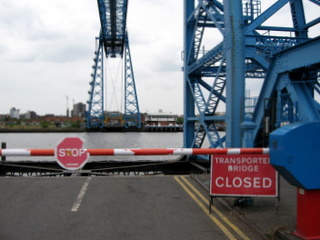 The rain started to fall about now, and got steadily heavier. By the time we had our final pit stop outside Redcar it was pretty wet and miserable.  Son Mark, whose exercise normally consists of running between the wickets or a run-up to bowl, had done 71 miles but refused to call it a day.
And so on to the final 16 miles and a real sting in the tail – the hills out of Saltburn and then into Brotton were steep enough, but then the gruelling long 1 in 4 out of Skinningrove, followed by at least three miles of uphill grind, was a real test, especially since conditions were so cold and wet at the summit. 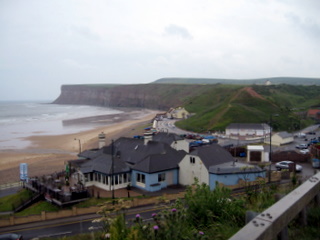 Saltburn
When we finally did arrive at Runswick Bay it was still pouring, Mrs Toop had been waiting a long time for her husband and Mark was pretty much exhausted, but he’d done a great job, as had the other riders.  But with hardly any phone signal and no wi-fi at all, the blog has had to wait 24 hours. And there won’t be time to catch up tomorrow, other than a very brief summary, before a fuller resume on my 24 mile ‘rest day’ on Wednesday.
Posted by Bill Honeywell at 21:45