51 miles, total 1,714 miles
It’s four weeks since I set off from Clitheroe, and a lot of water has gone under the bridge since then. Literally, considering the amount of rain we had – but (although it’s pouring down as I write this) the last few days have been kind. In fact for much of this afternoon I had a pleasant tailwind with the result that today’s average speed was the highest of the whole ride. Don’t get excited – 12.5 mph – but there’s lots of stopping for looking at scenery, taking photos and doing other things that you can guess without me having to tell you. 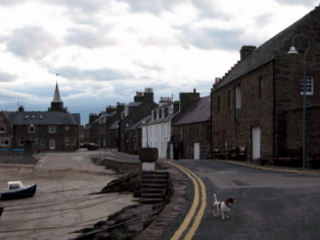 Yesterday’s blog was a bit rushed – but it was nice to get a visit from a fellow Clitheronian in the shape of David Berryman, who works in the Aberdeen-based oil industry. We went to The Ship Inn, where I saw a very pretty part of Stonehaven and drank a whole pint of… orange and lemonade.
Some other things to report from last night. All day I was aware of a noise from the front tyre which sounded like there was some chewing gum stuck to it which you could hear on every revolution of the wheel. But could I find what it was?  Eventually I found some unevenness in the tyre and, unable to find anything else, fitted a new one. This morning I was pleased to find that the noise had gone. Whether or not it was a problem I don’t know, but presumably the tyre carcass must have been damaged in some way so – better safe than sorry. 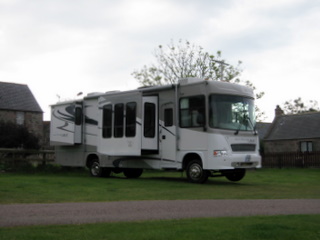 We were transfixed last night when a big ‘RV’ arrived at the site and proceeded to level itself up (look at the wheels off the ground) and then expand sideways as hydraulic bay windows and all sorts of other paraphernalia were brought into action.  Maybe an idea for next time, although I dread to think how much it would cost if a tree fell on that!
Then we were mesmerised by Peter’s granddaughter (age 13), who made a video on YouTube of Train’s “Hey Soul Sister” which is so professional and entertaining – and she is clearly enjoying herself too – have a look, you’ll love it!
http://www.youtube.com/watch?v=8XwD025GMwQ
Right – that’s last night sorted out!  The next blog will be about today, I promise!
Posted by Bill Honeywell at 17:47