81 miles; Total 3,041 miles
A leg injury
Two ferries – one pink, one chain-driven
A visit to the world’s largest cruise company offices
Val plays a blinder with a Southampton traffic warden
A visit from Val’s cousin near Bournemouth
Now, I keep forgetting to mention brother John, aka Captain Greybeard of Cruise Blog fame. He’s accompanying us this week in the motorhome and was beginning to feel a bit left out, not having been mentioned and all that.  So – HELLO JOHN! 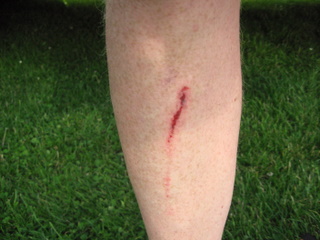 Before even setting off this morning I managed to walk straight into one of the wooden benches on the camp site and give my leg a large lesion and a big bruise. Ouch! It probably needs lots of fresh air, so no problem there. 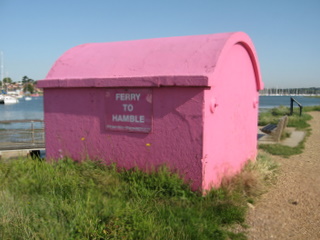 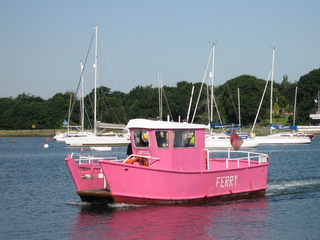 The Pink Ferry from Warsash to Hamble is amazing. I didn’t think anything could be that pink. It was 8.40 and the lady waiting at the jetty told me I would get a telling off for arriving before the official starting time of 9.00. It was a fairly mild telling off:  the skipper has also survived cancer, so I think we hit it off, although – quite rightly – he still charged me £1.75 for the trip. 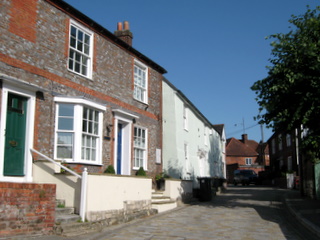 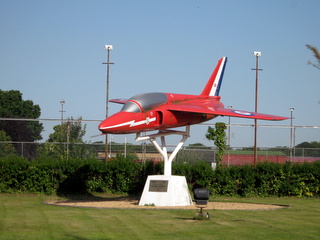 Hamble is rather quaint and as I’ve already photographed a Nimrod and a Phantom on this trip, I thought you’d like to see one of the Red Arrows Gnats.
Along traffic-free tarmac roads through the Victoria Country Park, then along the side of Southampton Water. I was a bit worried about the busy roads in the city, and approaching the Itchen Bridge I managed to persuade another cyclist to remove one of his iPod’s earphones so he could tell me how best to cross it, which he kindly did. Or at least he suggested I follow him, up some steps on to the bridge itself. No problem.
Back to the man who I failed to mention until tonight. John writes a most excellent blog concerned with anything and everything cruise-related – it’s at www.captaingreybeard.com and he is also a twitterer - @captgreybeard.  He had arranged for me to visit the Southampton HQ of Carnival UK, the umbrella organisation for P&O, Cunard and Princess Cruises, to meet those lovely PR ladies Michele and Kate (pictured). The powers that be didn’t approve of me taking the bicycle inside and so a lock was fetched – which turned out to be a gold anchor chain – look at the size of that! 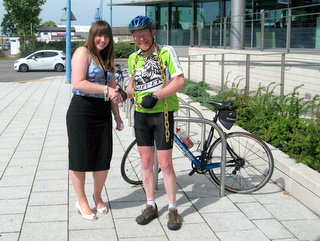 Kate had very kindly cooked up some Lemon Drizzle buns, so I volunteered to be test pilot for one. Michele is doing the Race for Life for Cancer Research UK next weekend. Val and Alan turned up and we had a very pleasant meeting in the atrium of Carnival’s exceedingly plush offices.
Now, as promised, I must tell you about Val and her absolutely first-class blagging skills!  She had left the motorhome on a Pay and Display Car Park, with a 2-hour ticket in the windscreen. When she returned, a Traffic Warden was studying said ticket and making a few clicking noises with his tongue.  Val asked him if anything was the matter.
“Well you see, you’re taking up two spaces, so you should have bought two tickets.”
Val said “I know that, but I knew I was only staying for one hour, so I bought ONE ticket for TWO hours instead.”
“Oh, well that seems to be OK then.” A pause. “But actually, the vehicle is crossing this line too, which means it is technically taking up three spaces.” To which Val replied:
“I’m a woman driver, what can you expect?”
The Traffic Warden laughed his head off, put his notebook back in his pocket and walked away!
She’s brilliiant, my missus.
After negotiating the rest of Southampton past the docks and all the other busy stuff, I was soon back in quiet lanes, over the little toll bridge at Eling (free for bikes) I carried on through the lovely Hythe, with its pier, and the not-quite-so-lovely Fawley, with its power station, to the picturesque seafront at Lepe, where I met another cyclist called Roy Jeffries, who was on holiday but had wisely brought his bike with him.  Also retired, and, like me, with us courtesy of the NHS, Roy and I seemed to be on the same wavelength as we cycled the five miles or so to my first official brew stop at Exbury, on the edge of the New Forest. 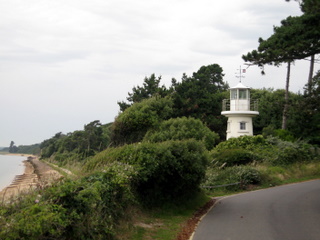 At which point I’m going to post this blog as Part One, otherwise the whole thing is going to be too long. Hopefully Part Two will arrive shortly!
Posted by Bill Honeywell at 21:31