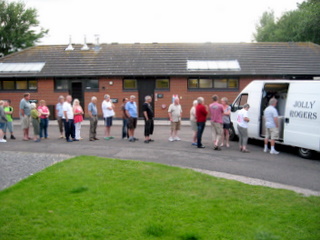 Firstly I need to mention last night’s supper – as the photo shows, the mobile fish & chip van - Jolly Rogers - which visited the caravan site was a pretty popular affair – Joan’s next to the front, about to be served with battered haddock and a lot of chips. Good cycling fuel, and delicious too. 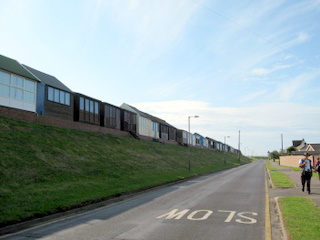 With a well-cleaned and oiled bike I set off into sunny weather and was soon passing by the serried ranks of beach huts which line the roadside at Sutton-on-Sea.  The minor road which runs closest to the coast to Chapel St Leonards is lovely and quiet, apart from the sound of birdsong (Whitethroat, Sedge Warbler, Reed Warbler).
For some reason I thought that I would get to Gibraltar Point before Skegness, which was of course completely wrong.  Although the SatNav is superb at keeping you on the route which you have plotted, it doesn’t have OS mapping and so it’s difficult to look around whilst on the move. Gibraltar Point is of course on the south side of Skegness, and as, for some unknown reason, I hadn’t plotted the route that way, Gibraltar Point missed out. Although this proves that using the SatNav isn’t perfect, I would definitely have been in trouble without it – if I’d used paper maps during all that wet weather in Scotland, I would probably have been lost several times, even if the maps had survived – but more likely they would have been turned to papier mâché. 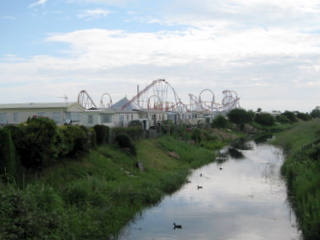 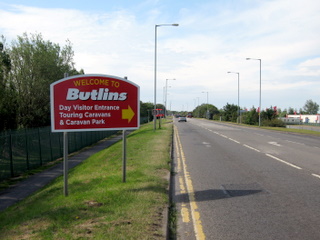 Skegness – described by a friend as ‘like Blackpool but without the sophistication’, a little unfairly I thought, but still not a place to linger. I just wish I’d seen the sign to Gibraltar Point. Alan saw it but said it was well camouflaged.
After a long main road section (thankfully not busy) through Wainfleet, I turned off at the strangely-named Wrangle on to pleasant but desolately quiet side roads, used only by farm traffic and surrounded by flat agricultural land growing vegetables like cabbages, potatoes, peas, and even parsley. I must confess I helped myself to a few peas, which were delicious.  There were people picking, and there were automatic planters, and overall, lots going on.  But no traffic – great! 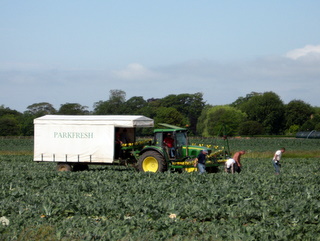 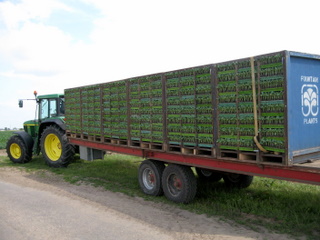 Just before reaching Boston I saw a sign to the Pilgrim Fathers’ Memorial, so I made a detour of about two miles to have a look. Not especially remarkable, but worth a look.  In a few weeks there may be another one, at Plymouth. 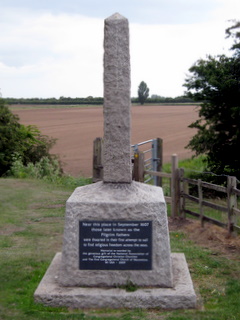 Skirting Boston, which boasts the largest parish church in the country (known affectionately as ‘The Stump’), and admiring the rotting hulks by the old docks, I once again plunged into rural by-ways, through Frampton (I thought Peter Frampton was a member of Traffic in the 60’s but was corrected – he was in Huimble Pie). 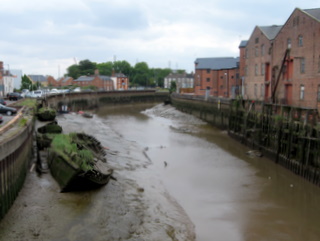 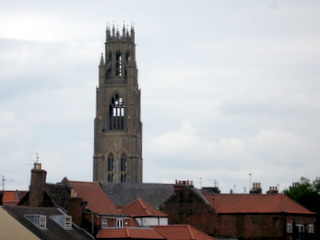 On the next section I completely lost my bearings (thank goodness for the SatNav again), continuing on country lanes before crossing the River Welland. 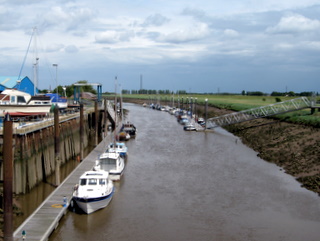 The final few miles were also across flat countryside, once described by a fellow northerner as “miles and miles of b*gger all” but actually very pleasant cycling, before arriving at the very bright yellow Rose and Crown in Holbeach Hurn with its adjoining caravan site and enjoying (for the second time on this trip) a daytime half of beer. 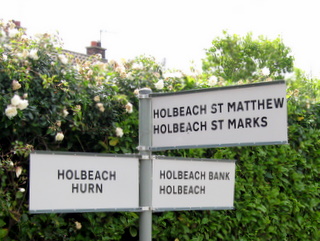 Another day, another dollar (I hope). KPO, we’re getting there – tomorrow – East Anglia!
Posted by Bill Honeywell at 20:28