41 miles – total 2,444 miles
I’m prepared to bet that Cromer hasn’t had 18 hours of continuous rainfall at any time this year, apart from yesterday.  It rained all afternoon, evening and night and was still raining as I set off for Great Yarmouth on this half-rest-day.  Incleboro Fields near Cromer is a very nice caravan site but it would be better if someone could arrange for a phone signal! 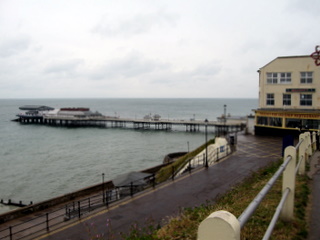 I didn’t realise there was a pier at Cromer!  As I left town on the coast road towards Overstrand, several small parties of teenagers were setting off on what appeared to be a Duke of Edinburgh hike, complete with maps, rucksacks, tents, and thoroughly miserable expressions in the steady rain.  I tried to cheer them up with a hearty ‘Hello!’ but didn’t even manage to convince myself! 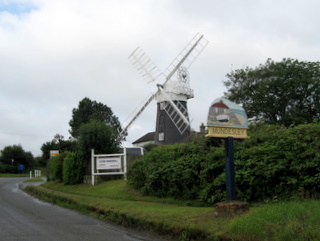 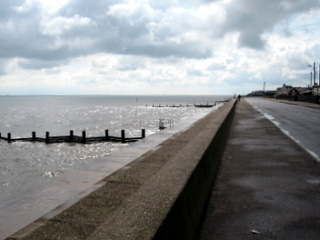 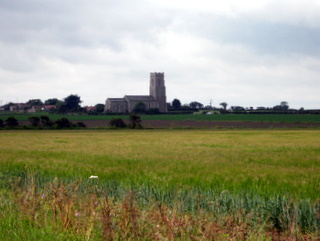 A good road runs close to the coast for a long way – much of it out of sight behind a sea-dike, rather like the North Sea Cycle Route in Holland and Germany.  Many of the village churches have huge square steeples, including the one at Happisburgh (which my colleague Simon assures me is pronounced ‘Haysborough’).  I’d arranged to meet the motorhome for a brew and cake at Ingham without realising that Ingham, rather than being a village, is probably an area about half the size of Wales. Anyway, I found them eventually!
At Waxham I was brought to a halt by a farmer who was taking some beef cattle along the road.  He said it hadn’t rained for four months until today – that’s how good a Rain Man I am!  He fattens sheep and sends them to Skipton Auction Market, near where I live – I was able to tell him I also know the auctioneer there, John Hanson, as we are both members of the Rannock Sheep Breeders’ Society – but that’s another story… 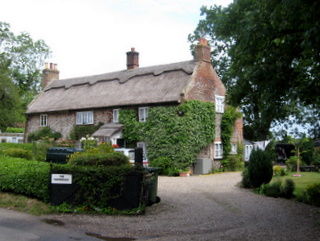 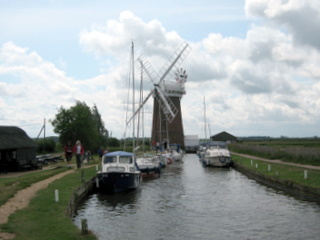 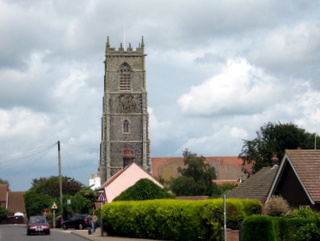 By the time I got to Horsey I was on the edge of the Norfolk Broads, and there are boats there and a windmill, all very photogenic, especially as the weather had brightened up.  As Great Yarmouth came closer, the roadside property turned more to holiday resorts again, and I was surprised to see signs to California (this after passing Miami beach near Sutton-on-Sea the other day!).
The caravan site at Great Yarmouth is right on the Racecourse; when I arrived (during a heavy shower) Simon and Tony had arrived to take over duties for the next week from Peter, Joan and Alan.  Unfortunately, they had put everything outside the van just before the rain started, so things were a little fraught. Anyway, last week’s crew departed safely – with thanks for looking after me – and the new crew started to sort things out.
Here’s to another week which should take me as far as Bognor Regis – all being well!  And if you would like to make a donation to Cancer Research – which is the whole idea of this mammoth bike ride – please go to http://www.justgiving.com/Bill-Honeywell
PS - Simon has just found the flyscreen door to the motorhome. When he asked whether we had had to use it  much I answered 'Oh yes, we've needed it to keep out all the flies that have been begging for shelter for the last five weeks!'
Posted by Bill Honeywell at 17:31