45 miles; total mileage 1,965
Got up early to see if the young swallows had flown, but they were still on the nest.  The plan was to cycle about 6 miles (it turned out to be 12) to Alnmouth and meet up with Russell and Martin from yesterday, together with son Mark, who you may remember was driver of the week last week.
Russell and Martin had stayed in a B&B in Alnwick last night, where, naturally, they found a few pubs to visit. Mark had arrived in Alnmouth the night before by train and spent the night listening to noisy women talking outside his billet, the Schooner Inn. 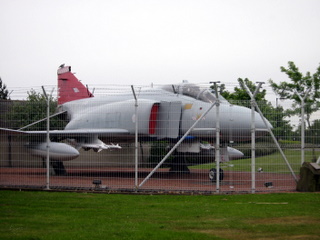 At Boulmer RAF Station there is a superb McDonnell Douglas Phantom parked at the entrance, then just before I got to Alnmouth a Barn Owl flew along the side of the road in front of me.  A rare treat to see, quite ghostly-looking.  By the time I found Mark, the ‘crew’ had changed over the pedals on my spare bike for him; I adjusted his saddle, Russell and Martin arrived, and we were off again.
After a brief look at Alnmouth, our next stop was Warkworth Castle – a superbly preserved fortress built by the Percy family and well worth a visit. We had our own personal guide in the form of Doctor Mark PhD, so learnt all about the history of the Percy family, Wars of the Roses, etc. 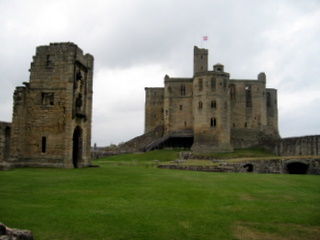 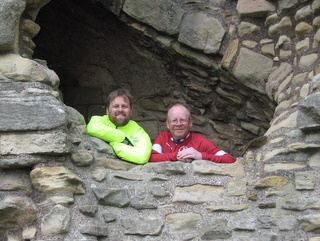 It started raining.
Down the road from Warkworth is the coastal town of Amble, on the mouth of the River Coquet; we carried on past, then had a quick brew and bacon butty at Widdrington before carrying on along the North Northumberland Heritage Coast through Cresswell, where an articulated tandem (yes!) passed us in the opposite direction. 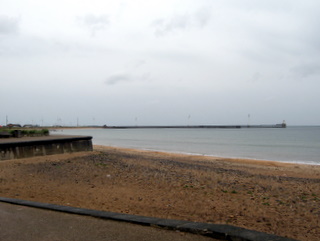 Now we ended up on some busy dual carriageway, but managed to leave and follow the NCN1 through Bedlington before reaching Blyth, back on the coast.  It’s quite a mixture of industrial and seaside resort around here, with some old remnants mixed with new developments. 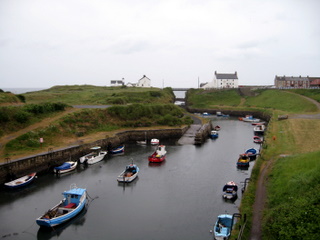 A final rainy run down the coast led us to the wonderfully-named Seaton Sluice, where we parted company with Russell and Martin, who had decided to carry on through Whitley Bay to Newcastle to catch their train home.
Being Saturday, we had a change of crew:  Peter & Gerry, after a week of cordon bleu service, returned to Clitheroe, to be replaced by Logistics Manager & brother-in-law Alan plus Peter & Joan West – who will soon be wondering what they have let themselves into!
Tomorrow sees more cyclists again!  James and Jill Alpe are joining me for three days, as far as Hull.  And for tomorrow only, son Mark is joined by Chris Toop, who arrived today and serviced both bikes into the bargain – thank you Chris!  Three long days now – 76, 90 and 92 miles – so here’s hoping for some good weather and a following wind!
Posted by Bill Honeywell at 20:49