63 miles; total 2,642 miles
Some days are packed with excitement.  Some days aren’t.  So it’s a good job today started in the convivial surroundings of last night’s hosts, Margaret and Adrian Rose, near Colchester. Along with my trusty support crew (Tony Spencer and Simon Clarke) I was given a great welcome, a delicious evening meal, comfy beds and a hearty breakfast.  AND… lots of food to take with us. Margaret (and Adrian) you’re an absolute star! 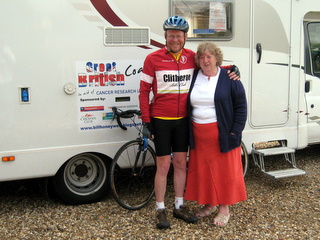 The funny thing is I’d never met either of them before – Margaret found out about me solely through Twitter and offered to do something to help.  So that’s a fine example of the benefit of the new internet revolution.  Wait until You-Tube, Twitter and Facebook are all amalgamated into one giant social networking site – called You Twit Face. 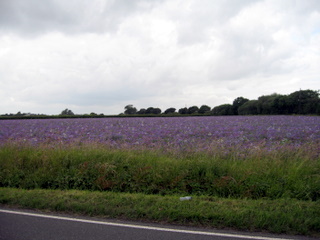 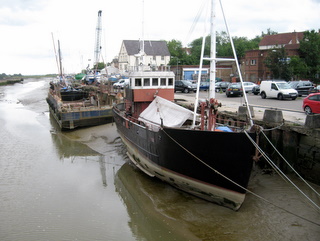 Maldon
After dragging myself away, I retraced my steps to Colchester and from then on, to be honest, it was a rather unexciting day, battling against a strong headwind, following roads through Abberton, Great Wigborough and Tolleshunt d’Arcy to Maldon, where, after a coffee and sandwich on the Tesco car park, I found myself negotiating the steepest hill since Scarborough.  Nearby is the site of the Battle of Maldon which took place in 991 in the reign of King Ethelred the Unready between the Anglo-Saxon Earl Byrthnoth and his men, and the Vikings, led by Olaf Tryggvason. The Anglo-Saxons were utterly defeated (a bit like modern international football) and as a result England began to pay Danegeld – kind of protection money - to the Vikings. 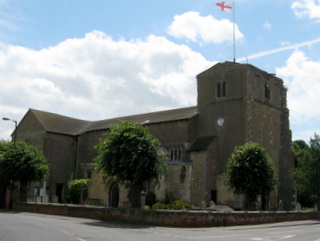 Southminster
South of Maldon I made a foray east to Southminster and back via Burnham-on-Crouch, passing a large vineyard on the way back towards South Woodham Ferrers, which has a very busy by-pass! 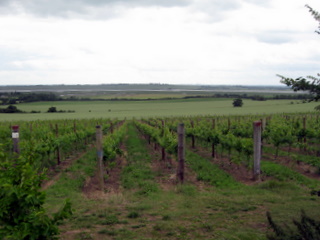 From here the road to Battlebridge crosses the River Crouch and then I expected to enter a quiet, agricultural area, but instead I found houses and bungalows dotted along the road almost everywhere from Hullbridge to the outskirts of Ashingdon and on to Canewdon (named, if the village sign is anything to go by, after King Canute). The road ends on Wallasea Island and here the Riverside Caravan Site enjoys a great location as our venue for tonight. 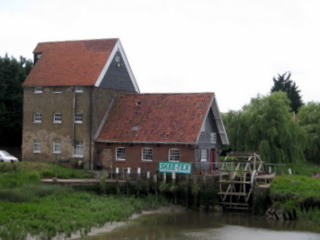 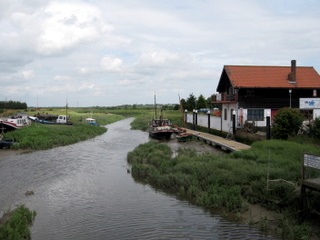 From the bridge at Battlebridge 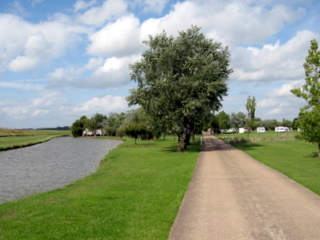 Camp for the night
Today is 21 June, the Summer Solstice, the Longest Day. Tomorrow, as the nights start to draw in once more, I’ll hopefully cross the Thames at the Tilbury - Gravesend foot ferry, then on to Whitstable, famous for its oysters. I won’t be having any, but I might allow myself a congratulatory beer for getting to the south-east proper, the Garden of England. But tonight we’re having lasagne, courtesy of Margaret (we just need to warm it up). And the boys tell me there’s a pub not too far away…
Posted by Bill Honeywell at 18:43