92 miles – total 2,143 miles
It finally stopped raining some time during the night. By morning it was overcast with a strong gusty wind blowing from the west.  James and Jill Alpe arrived just before 8.00, having found a good billet in Runswick Bay, and we set off on our planned 92 miles to Withernsea. 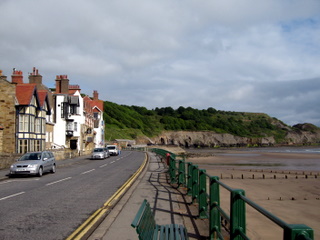 Sandsend
The road climbs up to about 650 ft above sea level before dropping down gently through the village of Lythe and then plunging steeply down Lythe Bank into Sandsend (the signs say 1 in 4  but like those on Sutton Bank they are an exaggeration, designed to strike fear into the hearts of people towing caravans). 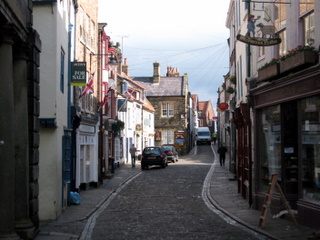 We soon arrived in Whitby, home of Bram Stoker’s Dracula, where it was necessary to dismount to climb the steep steps up towards the Abbey.  As always the views over the town were great – it really is an attractive town with its narrow cobbled streets, smokehouses and jet workshops (not the aeroplanes, the gems!) 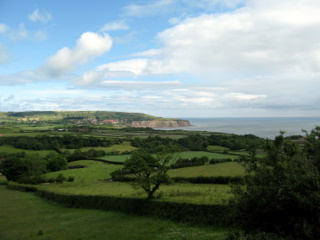 My original planned route to Scarborough was on tarmac roads, which in this part of the world are not only tortuous but steep, so I decided to risk taking the old Scarborough to Whitby railway line, now a cinder track – this is, of course, much more level, but it isn’t too suitbable for a road bike.  Nevertheless, although progress was slow, it was an easy hour-and-a-half, with good views back to Robin Hood’s Bay and the interesting alum quarries near Ravenscar (look them up, it’s a fascinating piece of history).
Just as we left the track at Claughton, Jill picked up a puncture. Whilst James mended it, she went back to the village shop for a salad sandwich!  We had a rendezvous with the van soon after, in a lay-by just outside Burniston.  Another motorhome was parked there, and the owner knocked on our door to introduce himself, then proceeded to tell us how he had driven all the way around Scotland. I replied that I’d just cycled the entire coast of Scotland, but he appeared to be on ‘transmit’ only (‘receive’ was, I think, set to ‘off’) and continued to mention all the different places – Aberdeen, Inverness, Wick, Ullapool – I briefly mentioned that I’d cycled to them all, but it went over his head – and then said “The weather was so bad we had to stay in the van for three days” – I didn’t bother to tell him that I hadn’t stayed in the van!! 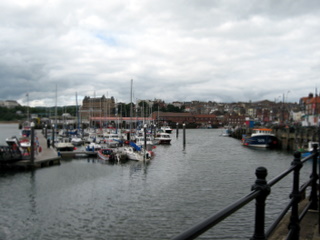 Scarborough
Through Scarborough (a bit more off-road scrambling at the south end of the Spa!), then on to Filey and Flamborough, with the benefit of a tailwind for a while. As I was doing 28 mph a motorist overtook me with about two inches to spare, which I didn’t find amusing.  There is an old tower at Flamborough Head which looks as though it could have been build for defensive purposes, and a surprising number of bungalows which appear to be a long way from anywhere. The return journey was hard work, straight into the wind which had been so helpful before. 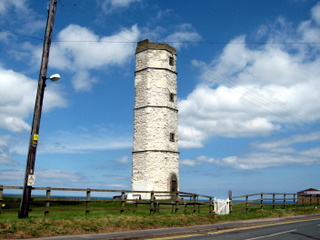 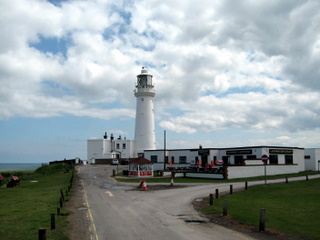 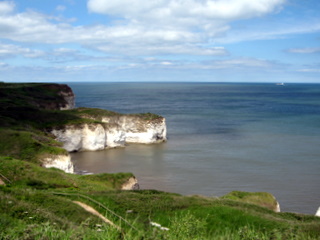 It was now getting towards 3 o’clock and we still had nearly 40 miles to go! So we didn’t linger in Bridlington, pressing on to a little diversion close to the coast at Skipsea. I hadn’t bargained for the road being so close to the coast!  We nearly made it but at the far end there was absolutely no road left so we had to retrace our steps.  It's a pretty vivid example of coastal erosion!  A quick detour through one of the many caravan sites got us back on track. 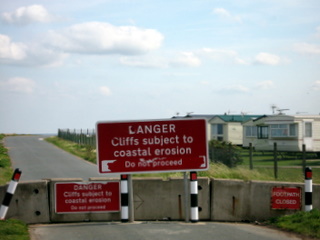 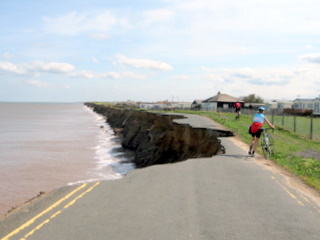 With James and Jill picking up so many punctures we stopped at a bicycle shop in Hornsea and bought some new inner tubes.  After that it was a fast run (apart from another puncture for Jill) in easing winds to the finish at the Park Resorts Withernsea Sands. 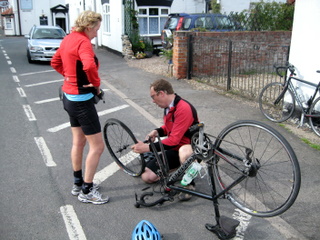 Here the staff couldn’t have been more helpful – when James and Jill returned, after a fruitless search for B&B in Withernsea, they found them an empty trailer tent and let them spend the night there free of charge.
So a long day but the satisfaction of a good mileage covered. Another long day tomorrow before I can have much of a rest.  And the weather forecast is good – can I believe it? 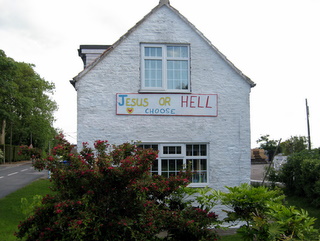