88.9 miles – total 1,803 miles
Highlights of today!! –
* Toilet tragedy!
* Tay Bridge Boob!
* Crowds for Leven Chimney Demolition – I miss it by one hour!
* The World’s Ugliest Building!
* Soaking at Inverkeithing!
I don’t know who it was, but last night somebody flooded the floor of the shower & toilet block at the Carnoustie Caravan site and strewed toilet paper all over the damn place. I was somewhat dismayed when I got there soon after 6.30 am, but decided that there probably wouldn’t be too much demand for the disabled facilities at that time of the morning and used them instead. 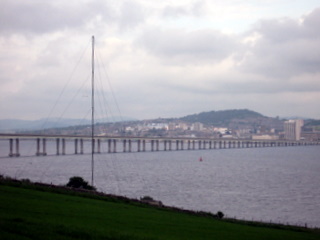 I had a great start in fine weather on level roads with a following light breeze, flying along at 16 mph through Monifieth, the picturesque Broughty Ferry and then Dundee, town of Jam, Jerusalem, Jute, Journalists and anything else that begins with a ‘J’.  Either the signposting for the Tay Bridge is poor or my eyesight is worse (it’s probably my eyesight) because I missed the cycle lane (which is in the middle like a three-mile long cage) and ended up on the main carriageway. A bit scary. All the other drivers were fine; just one car tooted at me, presumably to say “You should be using the cycle lane you idiot!.”  Thanks fella. If you can tell me how to get off the carriageway on to the cycle lane then toot away. Still, at least it proves he saw me. 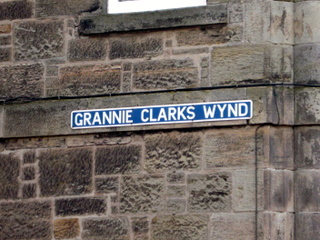 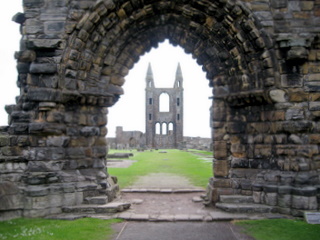 St Andrews' Abbey
Tayport and Leuchars followed (big sign “KEEP THE RAF AT LEUCHARS”) then St Andrews – home of the ancient game of golf and a café with a great big sign proclaiming “WHERE WILLS MET KATE”.  I only saw one, but presume there could be more…  St Andrews is a bit like Harrogate, very genteel, big houses, but some very strange street names (I didn’t stop to photo ‘Butts Wynd’ for fear of offending any American readers) and a ruined Abbey. 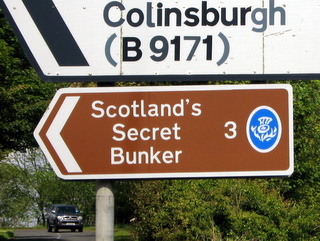 That'll be the SECRET Bunker that no-one knows about then... 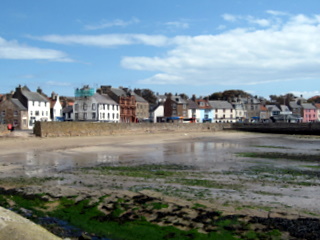 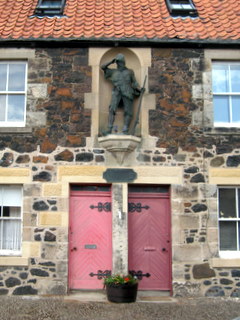 There are some really bonny seaside villages along the Fife coast – Crail, Anstruther, Elie – and at Lower Largo, where lunch of prawn sandwiches was served (I’m getting spoilt), the house where Alexander Selkirk, the original Robinson Crusoe, lived, complete with Grecian-style statue on the front wall.  Several buildings have footprints painted on their walls too. Twitterers will wonder if this was the original #FollowFriday… 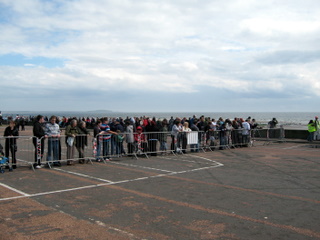 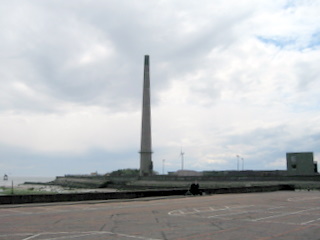 Arriving at Leven I found excited crowds everywhere, lots of men in High-Vis jackets and even a couple of film crews. Had they been tipped off about my arrival? Sadly no – the old power station chimney was due to be demolished at 2.30.  It was only 1.30 and I couldn’t afford to wait an hour, so didn’t get to see the action. Worry not – it would be just like the Clitheroe Cement Works chimney demolition two years ago – here’s a link to that instead, so you can have the same fun! –
http://www.youtube.com/watch?v=DqSInGhu9jQ 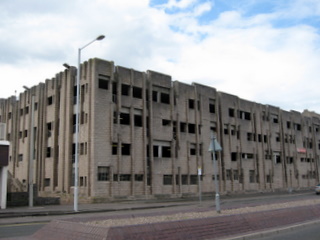 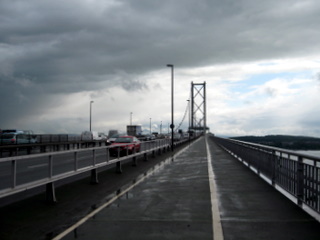 As the Forth Bridge came into view, the heavens opened (just for a change) and I got a thorough drenching as I passed through Inverkeithing. The bridge itself was exhilarating as usual (I’m an old hand, having cycled over it on my Land’s End – John o’Groats trip a few years ago).  Afterwards I had plotted the route through Queensferry, which has been reinstated in olde-worlde cobbles for about 600 yards – crotchwangley, bone-shaking, fillings-dropping-out rough! 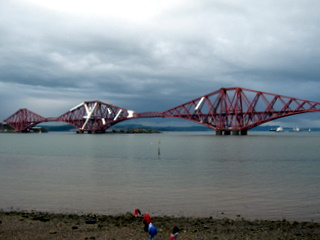 Finally, after a few miles of hectic traffic on the outskirts of Edinburgh, the peaceful haven of the Caravan Club site down at the peaceful oasis that is Marine Drive. Another day done.  Tomorrow is the last day in Scotland – but I’ll start a little later because I’m visiting a firm of financial consultants at 9.00 – why? Buck Consultants have promised to raise some money for Cancer Research UK, that’s why!  That’s the reason for doing this ride, so I’m happy to go and see them to thank them personally.
Hopefully the next blog will be written in England!  KPO! (Keep Pedalling On – with apologies to Winston Churchill).
Posted by Bill Honeywell at 21:26