51 miles, total 1,714 miles
Now, where was I?  Oh yes, four weeks since the ‘off’ – so today the fifth week started with me going the wrong way. Did I tell you I was a geologist? Well I am, if only in an amateur capacity.  And Stonehaven is where the West Highland Fault, which separates the Highlands from the Lowlands, reaches the east coast (it’s western end is on the Island of Arran).  So I headed north to have a look at it, but unfortunately the last half mile is a rough path so I didn’t bother getting up close and personal.  Good to start the blog with a bit of non-news… 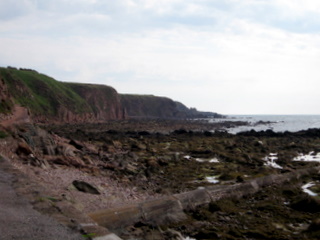 Back to the job in hand I cycled through the centre of Stonehaven, leaving on the coastal road which passed the ruins of Dunnottar Castle and provided a gently undulating route off the main roads, although I soon had to rejoin the main coastal road. Thankfully it wasn’t too busy. 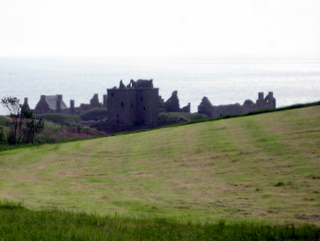 I realised that since at least John o’ Groats I’ve been following the North Sea Cycle Route. I did about 1,000 miles of it a few years ago – from Rotterdam to Lemvig in northern Denmark – and by the time I get to Harwich I’ll have done all the Great Britain bit. All that will be left is NE Denmark, Sweden, Norway, Shetland and Orkney.  Some other time… 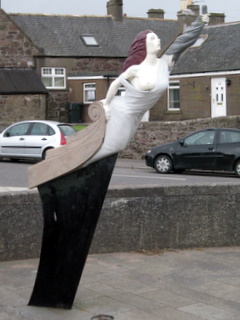 Inverbervie is the birthplace of the wonderfully-named Hercules Linton, who you all know was the designer of the Cutty Sark, the record-breaking tea clipper.
The van was waiting in Montrose, and whilst I was enjoying a brew and a butty, there came a knock on the door. ‘Twas a journalist/photographer from the Dundee Courier who was passing and spotted the signwriting. So a quick photoshoot, details, etc. – no doubt I’ll be on the front page shortly! 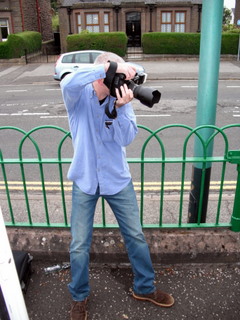 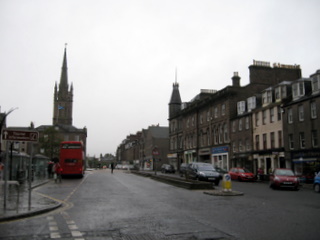 Through the town (Montrose boasts the widest high street in Scotland – which town has the widest in England? – let me know without looking it up!) then a pleasant run through productive fields of cereals, potatoes and newly-planted cabbage-type vegetables, to the port of Arbroath, y’know, where the Smokies come from, but where there is also a fine old Abbey and a nice little marina.  And an estate agent called Blackadder! 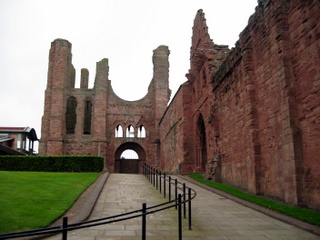 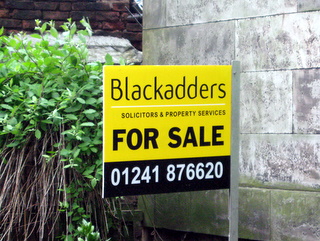 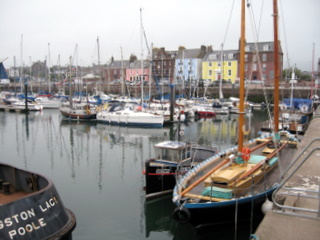 From here it was a fast run with a tailwind to Carnoustie. If you read yesterday’s blog (and if not, … oh, never mind!) I was complaining about cycle paths in Aberdeenshire. Now Angus has got it right!  Alongside the dual carriageway is a cracking smooth, wide cycle path, admittedly a little bit of fine gravel could do with a sweep, but oh!, what a contrast to yesterday, an absolute delight.
Arriving at Barry Downs Caravan Site, who, like the vast majority of sites, are kindly giving us a free stay, I just had time to clean and oil the bike bits and have a shower before the heavens opened. Perfect!  Here’s to another good day tomorrow – just under 80 miles (including some big hills and the Forth Road Bridge) to our stay in Edinburgh.
That’s it folks!
Er, no it’s not – I haven’t mentioned for a few days the fact that I am doing this ride to raise money for Cancer Research UK. Of course it’s fun (sometimes) and I hope you enjoy reading about it, but please spare a thought for the main purpose of the ride and make a donation via either of the links available –
http://www.justgiving.com/Bill-Honeywell or
http://tinyurl.com/cancerbikeman
Now I’m going to be really cheeky! – Even if you have donated, would you consider donating again, if not now, as an incentive for when I finish?  Just a thought, tell me if I’m overstepping the mark – you can always use the comments facility…!
Okay, that’s today finished.  Now I just need to sort out some details for my companion riders this coming weekend – looks like the roads of Northumberland will be playing hosts to three estate agents and two seriously clever academics – more details soon.
Posted by Bill Honeywell at 18:30