52 miles, total 1,664 miles
Peterhead is a great location for a caravan site – overlooking some of the busiest sections of the harbour there. I set off around 8.30 after a hearty breakfast and was soon spinning along country lanes leading to the Forvie National Nature Reserve.
I crossed a large estuary and thought for a moment I was in Wales – the River Ythan – with a superb block of modern residences overlooking. 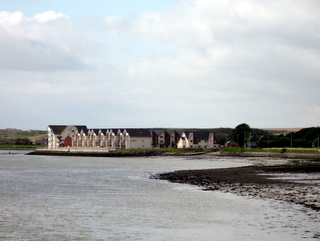 A busy section of main road followed, then an ‘elevenses’ break in Balmedie, where Peter (he says he isn’t a Cordon Bleu chef but he may as well be one) showed us how best to cut a cake – cut a circle in the middle, then slice as usual but leave the middle bit and cut into four – no thin pointy ends etc. It was Val’s Victoria Sponge so I hope she approves. 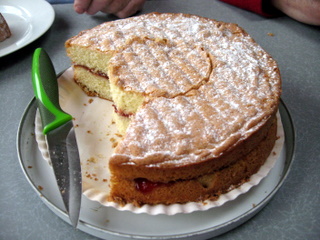 After another busy road section I arrived in the Granite City of Aberdeen – very impressive, although with all that grey granite I was wondering what it would look like on a miserable wet day. 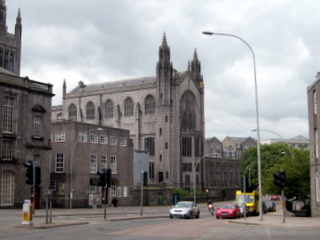 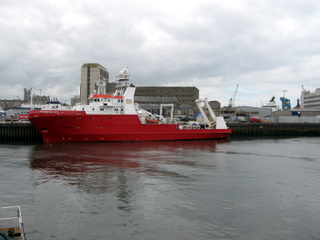 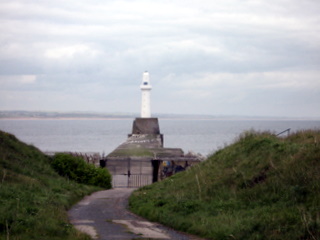 The docks were busy but then afterwards there was an impressive headland with lighthouses, golf courses etc.  More country roads followed, through Cove Bay and Findon, past a massive new college building in Portlethen, and finally, after another busy dual carriageway, Stonehaven.
What annoyed me was the fact that on this section there was a cycle path to the left of the road, but much of it was unrideable – with stones, hardcore, broken glass and so on. If local authorities are going to provide these facilities, why don’t they maintain them?
Tonight we have been joined by Clitheronian (although he says he’s from Read) David Berryman, who works in the oil industry in Aberdeen.  He says he’s going to take us for a pint, so this blog is a bit rushed! I’ll catch up tomorrow – see you then!
Posted by Bill Honeywell at 20:28