Day 29 – Berwick-upon-Tweed to Dunstan, near Alnwick 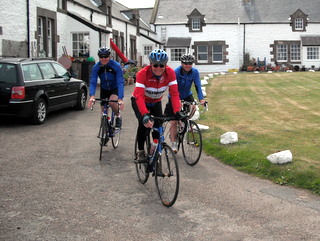 Today I was joined by two fellow cyclists from Clitheroe, Russell Anderton and Martin McShane – who also happen to be fellow estate agents, so if you were thinking of selling a house in Clitheroe in the next couple of days the choice might be limited!  Russell and Martin had arrived by train in Berwick last night, found a B&B and a good pub, and as a result were in good spirits when they arrived at our caravan site, on the outside of a full English breakfast. 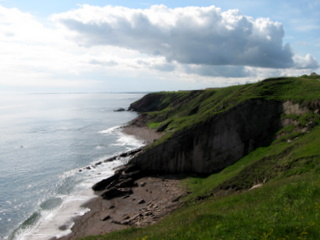 In an attempt to avoid the A1 we followed the National Cycle Network route, which included some off-road stuff which was a bit extreme for our road bikes!  Unfortunately the tide was well in, otherwise I could have shown them the fantastic rock strata at Scremerston Beach which show how the world’s sea levels have been rising and falling by up to 300’ on a regular basis over the last many millions of years, without man’s help.
Martin picked up a puncture on the rough stuff and kindly allowed me to fix it for him, just so I could keep in practice. 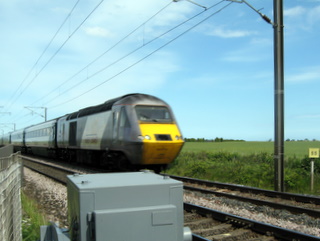 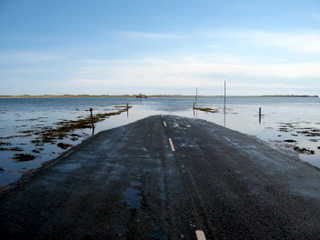 The state of the tide also prevented us from crossing to Holy Island – the second time a hoped-for visit has been thwarted.  Then, after a stretch on the busy A1, we took quieter roads to Budle Bay and Bamburgh, where we found the Grace Darling mausoleum and the magnificent castle which looks as though it is almost growing out of the rock it’s built on. 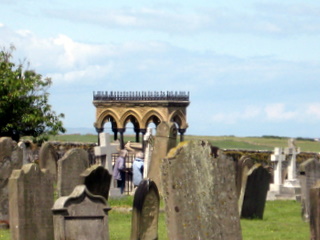 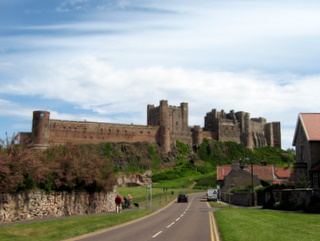 As this was a short ‘rest’ day, we decided to have a slap-up lunch at Seahouses in Lewis’s Fish & Chip Restaurant – and very good it was too! Peter was complaining that he couldn’t find any live lobsters – so we’ve missed out on a gastronomic treat, clearly. 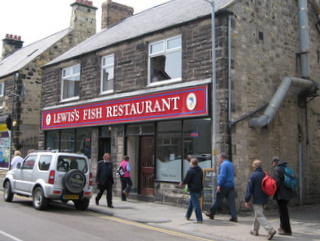 No time for a trip to the Farne Islands though – instead we carried on past Beadnell to the absolutely captivating Low Newton. 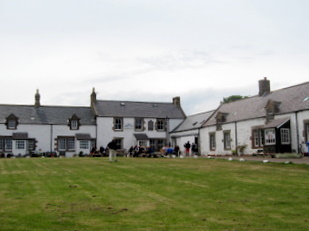 Here, on a three-sided village green, stands The Ship Inn, with its adjoining micro-brewery.  For the first time on this ride I decided to have a daytime tipple (Martin was paying!) and had a half of excellent White Horse bitter. 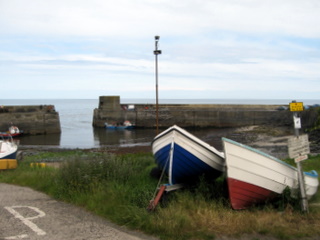 Then on to Craster, location for a BBC series starring Peter Davidson and Samantha Bond a few years back (I can’t remember the title). We couldn’t get a decent view of nearby Dunstanburgh Castle so went in the Smokehouse instead, where Gerry and Peter were purchasing a few things for tomorrow’s lunch and to take home.
Having already gone past our caravan site earlier, I took the easy option and jumped in the motorhome for the one mile ride back – in case any Fleetsmart addicts thought I was travelling a bit too quickly!  These baby swallows are in a nest right by the side of the door to the gents' toilet block. 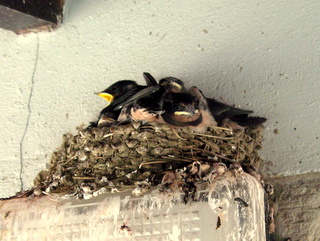 FOUR cyclists tomorrow – today’s contingent plus son Mark (aka Doctor Tweak).  The caterers are going to be a bit stretched… Then again, it's another change of crew tomorrow too - Peter & Gerry will be giving way to Peter (West) & Joan, plus brother-in-law Alan. Another week gone.
Posted by Bill Honeywell at 20:18