54 miles – total 3,095 miles
Today I left behind the busy south-east and entered proper rural Dorset.  First of all I had to climb from the caravan site back up to the road near Langton Matravers – a good start if you want to get warmed up quickly! 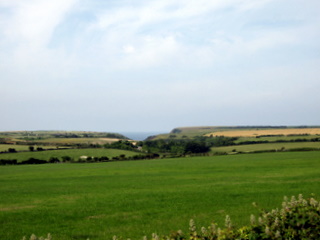 The scenery was rolling fields with the sea in the distance – nice to see lots of green for a change! 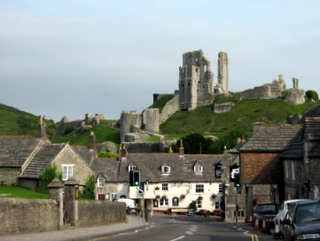 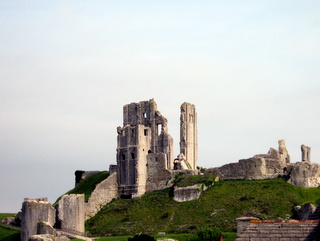 I could see Corfe Castle in the distance, and after the steep descent from Kingston, the village of Corfe Castle soon appeared.  The castle has an absolutely superb setting, overlooking the village from a high knoll, and probably looks better in its ruined state than it would in perfect condition. 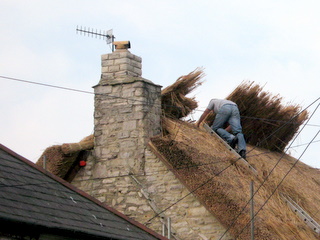 The next section was great fun, up and down through quiet villages of thatched cottages before a longish climb before turning left to East Lulworth. But at this point I was faced with a big red flag, a locked gate across the road and a sign saying that the road was closed for miltary training. There was nothing for it but to make a big detour around Grange Heath before passing Lulworth Castle and Lulworth Camp, where the semi-automatic gunfire was so-close to the road that I was getting a little worried – I think I was pedalling faster than usual! 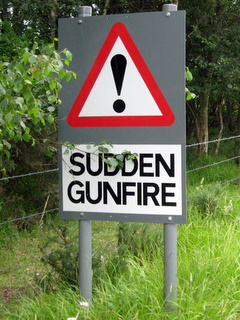 That'll be as opposed to 'Gradual Gunfire' then... 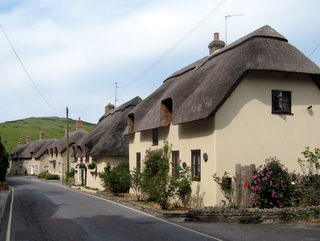 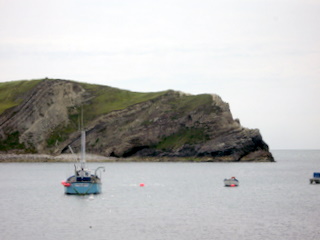 West Lulworth is a very pretty village, and Lulworth Cove is also very attractive - and extremely interesting from a geological point of view, but it’s obviously a big tourist attraction, with visitor centre, shops, and all the other paraphernalia.  Still, I had a look at the twisted rock strata before climbing away again. 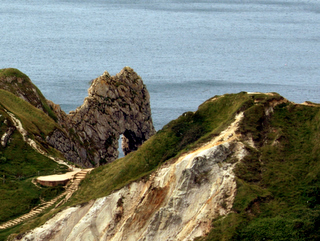 I didn't visit Durdle Door but brother John went to have a look and took this photo from some distance away - it's a pretty impressive sea arch! 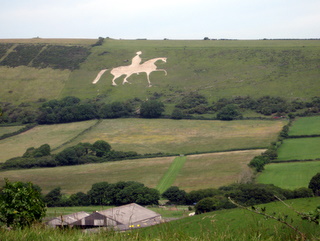 This was cycling like I’m used to at home, with plenty of hills, not like the flat terrain I’ve been on for the last two weeks.  Mind you, up in Lancashire we don’t have any white horses carved into the hillsides! 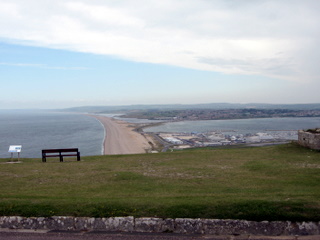 Weymouth is bigger than it looks, with the seaside part followed by quite a bit of ‘town’ on the way to Portland, really a peninsula consisting of the original Portland Stone, connected to the mainland by the narrow causeway that is Chesil Beach, the longest gravel spit in Britain. 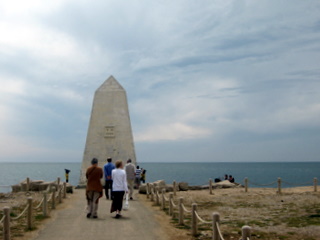 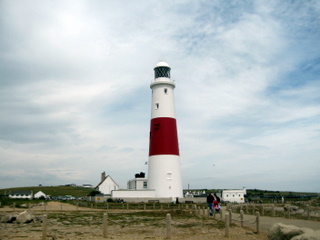 It’s a big lump of rock which meant another climb over the top before dropping the surprisingly long distance to Portland Bill at its southern tip, where, reminiscent of Dungeness, there is a conglomeration of wooden huts, although this time they really are beach huts rather than over-priced houses.
Retracing my steps I soon came back to tonight’s caravan site – Pebble Beach at Wyke Regis just outside Weymouth.  We’re next door to another army training ground, and small arms fire is rattling away as I type this blog.
I’m now in a spell of a few shorter days, although there are lots of hills to get up and down – tomorrow, after Lyme Regis, I’ll reach Devon and visit the wonderfully-named Beer, as well as Sidmouth and Budleigh Salterton before taking the Exmouth to Star Cross ferry.
Did I mention that I’m now over half-way to my target of £20,000 for Cancer Research UK?  But only just!  There’s still lots of donations needed, so please don’t be shy and go to www.justgiving.com/Bill-Honeywell - every donation is welcome!
STOP PRESS: I’ve just heard from the organisers of the Rock the Castle Gig, which takes place at Clitheroe Castle on Friday 12 August, that they are donating a third of the profits to my Cancer Research UK fund.  So make a note in your diary to attend!  I’ll get more details and post them soon!
Posted by Bill Honeywell at 17:47