85 miles – total 2,259 miles – over half way!!!
Day dawned bright and warm in Withernsea. James and Jill Alpe, after a fruitless search for accommodation last night, fared much better for their breakfast although they weren’t impressed by the man on the beach with the remnants of a bottle of wine. He looked like he’d spent the night there… 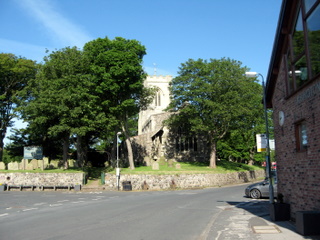 There’s an awful lot of land east of Hull and it was our job this morning to explore it.  First was Easington, where there is an installation dealing with North Sea Gas as it comes ashore. The village has plenty of pubs and a nice church, and also a middle-aged man wearing a T-shirt with a rather rude message on it – not very becoming! 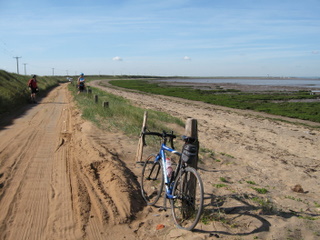 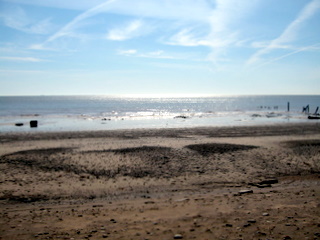 At Kilnsea the vast expanse of the Humber estuary suddenly comes into view – quite a surprise!  We planned to continue south all the way to Spurn Point, but a mile and a half from the end of this remarkably narrow spit of sand, the road became a track of rough concrete blocks, giving James yet another puncture; we decided that to continue to the end would not be a good idea, so, after the puncture was repaired we turned around and headed back.  On the way, a Roe Deer ran across the road in front of us and bounced its way through the adjoining wheat field. 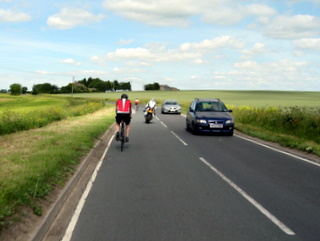 The route took us back towards Patrington (lively primary school) and then out into fabulously quiet country lanes – it felt like we were miles and miles from any towns or cities, just agricultural land with wheat, barley, peas, broad beans.  I’d plotted the route over a sluice where the map showed only a footpath – but I’d looked on Google Earth and decided the bike would go over.  Fortunately it was OK, otherwise we would have had a long trek back!  Standing on the bridge was a lovely old chap who said he came there on his motorbike two or three times a week just to look out over the marshes. 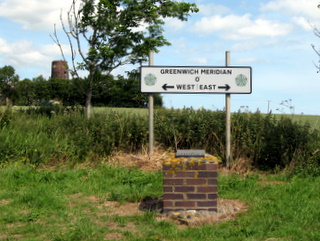 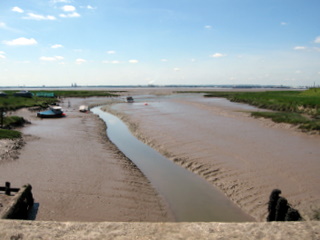 More and more open fields and farms, until eventually we were on the outskirts of Hull, trying to sort out the cycle paths, which eventually (after passing the unusual war memorial at Marfleet) lead on to the water front – a great location for a cycle path but difficult to negotiate at times over little bridges and so on! 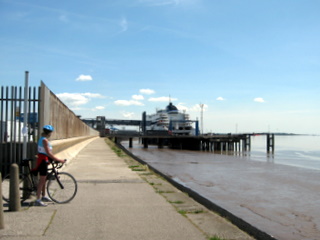 Near The Deep (aquarium / museum) there was a sign for the central railway station, so it was time for James and Jill to take their leave as they had left their car in Whitley Bay three days earlier.  As soon as they had gone, the cycle path deteriorated and became more and more difficult to follow.  I was faced with broken glass, difficult navigation, then a decent spell along the river front, followed by a nasty narrow gravel section with nettles on either side – and no signs anywhere. 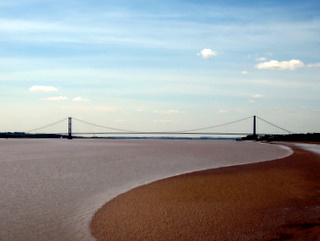 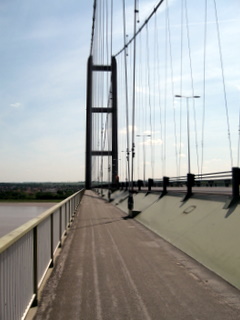 At the Humber Bridge I had arranged to meet Paul Duckworth, a Rotarian from Grimsby who was to cycle the afternoon section with me – and after a bit of searching I managed to find the information point where we had agreed to meet. The bridge itself was shorter than I expected (which seems odd) – shorter than the Tay Road Bridge or the Forth Road Bridge.  Then a very late lunch break at Barton on Humber before a pleasant rural interlude including the road past Thornton Abbey. 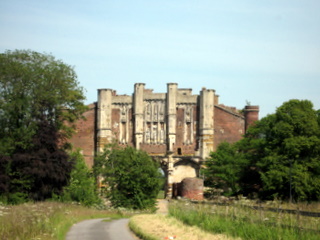 But for the final fifteen miles we were faced by really busy main roads, with all the HGV traffic for Immingham and Grimsby docks and a four mile section of concrete road where the road noise was absolutely immense – we must have endured about 120 decibels for twenty minutes and were almost deafened.
Finally we arrived at the Haven resort of Thorpe Park at Cleethorpes.  Paul presented me with a cheque for £100 from his Rotary colleagues and then departed for home in Grimsby.  Meanwhile I was wrestling with wi-fi problems which appeared insurmountable and made any updates to the blog impossible – but more of that later, if I get time. 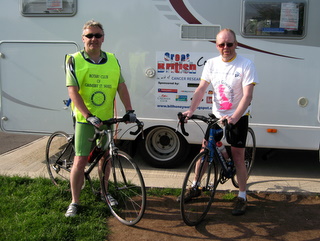 Three long days, 265 miles on the total, not bad. The rest of the route is all south of Clitheroe, and so far the old body is holding up – just!
Posted by Bill Honeywell at 19:14