In Memory of Geoff Braithwaite 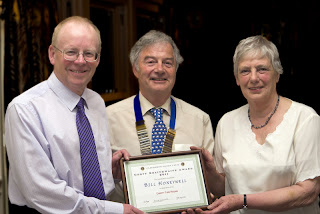 To my great surprise, Clitheroe Lions have awarded me their annual Geoff Braithwaite Award, in memory of their founder member Geoff Braithwaite MBE who also happened to be a second or third cousin of my mother (I won't bore you with the genealogical details).

I'm very flattered, and last night Val and I went to the Lions' meeting to receive it, together with a cheque for £250 for Cancer Research UK.  The award was given in 'recognition of my charity fund raising efforts' and it's jolly nice to get an award for something you like doing anyway!

Geoff's widow Diane, who lives in Downham, the village where Val was born (apologies if this is sounding a bit like nepotism) was also there to present the award, and is in the photo alongside David Hepworth, Lions President.

The other highlight of the night was a 'job-talk' from Brian Cushing. I have known Brian for over 45 years and - like everybody else - never really knew what he did for a living, other than he was a man of mystery. Now retired, last night he revealed all, and it was a fascinating and hilarious talk. Now we know just what he did - but if I told you I'd have to shoot you of course, so it has to end there.
Posted by Bill Honeywell at 09:18