A Boost for Morale 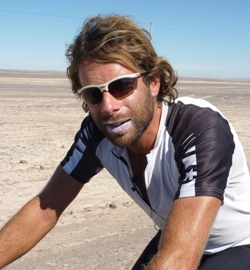 Since 'discovering' Twitter it's been quite interesting to see who's started following my tweets - which admittedly don't have much to say at the moment, but once the ride starts then I hope I'll be able to keep people updated with progress.
Most of the interest comes from people who have an obvious interest in cycling, but there are also one or two young ladies out there who clearly have no idea how old I am!!
So it was a great morale-booster when Scotsman Mark Beaumont (pictured) got in touch this morning to add his support to the ride. In 2007/8 Mark smashed the record for cycling around the world in 194 days (the record's been broken again since), and last year cycled from Anchorage (Alaska) to Ushuaia at the tip of South America, climbing Mt MacKinlay and Aconcagua, the highest peaks in N & S America, on the way. His BBC programmes on the two rides were excellent.
Mark said "Great Britain has a famously twisty, hilly coastline so attempting to cycle around it is a serious undertaking! Best wishes for the challenge and your fantastic fundraising efforts Bill."  Thank you Mark!
Lots of good things come out of Scotland - a fellow Rotarian from Whitburn suggested I try to get the local primary schools involved - the children can follow progress around the country which should help their geography, whilst it won't harm for all the parents to be more aware of the ride and the fund-raising.  What a good idea - I just need to find some more time!
Posted by Bill Honeywell at 10:05