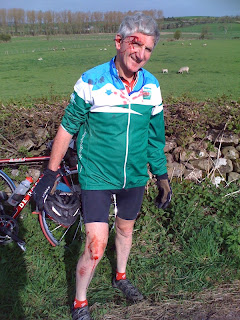 Literally. Yesterday was the Bay Dash Cycle Sportive organised by Lancaster Rotary in the . Frost on the cars when we left Clitheroe and not much warmer when we (me, Richard Dugdale, Mick Bryan and Gordon Morley) set off from at 0830.  After 10 miles, just after Burton-in-Kendal, we were passing another small group of riders when Richard, unsighted at the back, hit a sunken manhole cover badly and crashed in spectacular style, hitting the road head first.  His safety helmet took the brunt of the impact – without it he would have been in a very bad way indeed – and he also had cuts and bruises (what bruises!) to arms and legs.A retired vet was following at the time: she stopped, checked him over, wrapped him up and waited until someone came out from the start to help. He was a retired GP: took one look at Richard’s head and took him to A&E at Lancaster where he received 18 stitches to the wound. We were going to go with him to A&E but the GP said finishing the remaining 50 miles of the ride would be quicker than waiting in A&E – good point! 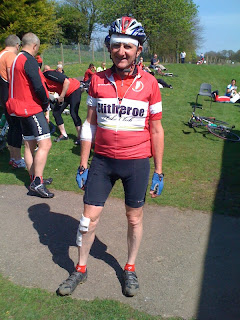 So we left Richard in good hands and continued on what turned out to be a really good ride in great weather through some great S Lakes countryside. 63 miles in just over 4 hours riding time, and feeling strong up all the hills made a very nice change. Perhaps the training is paying off.
Richard got back from A&E in good time and rode four miles back along the route until he met us – I asked him how he was and he said “I feel like shit” – now why would that be, I wonder? I know there’s a bit of controversy about making helmets compulsory, but there’s no getting away from the fact that if you’re going to crash at over 25 mph it’s a good idea to be wearing one!