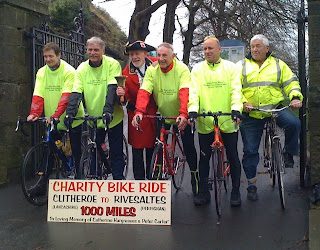 Clitheroe's twinning with Rivesaltes, near Perpignan in France, came about in the 1970's not through some councillors' 'jolly' but the Waggon & Horses pub football team.  I don't know the full details but suffice to say it's been a successful liaison with regular trips back and forth to France and plenty of football matches.
The next visit from Clitheroe to Rivesaltesw is in a couple of weeks, but two hardy cyclists, Roger Hargreaves and Pete Parkes, set off today to cycle the 1000 miles or so.  The ride is in memory of Peter Carter and Catherine Hargreaves (Roger's wife) who both died recently, and proceeds are going to NW Air Ambulance and other worthy causes.
I went to Clitheroe Castle this morning to Roland Hailwood, Clitheroe's official Town Crier, see them set off in style.  They were accompanied by three supporters who are doing just the first day with them - there seemed to be some confusion about whether today's leg ends at Knutsford or Northwich - Roger said all he new was that it starts with an 'N'...!  As in nuts.
Good luck to them both!! This means that it is now just five weeks to the day before I set off, and there's lots to do yet!  Oh, sorry Roger - that's Roger on the right of the Town Crier with Pete on his immediate left.
Posted by Bill Honeywell at 12:24