A Surprise At Lunchtime

First things first.  I’m a member of Clitheroe Rotary Club.
Now before you start thinking of secret societies and the like, let me tell you it’s nothing at all like that. On average about 40 members of both sexes - mainly men, I admit - meet every Thursday lunchtime and have a one-course lunch (oh, the decadence!). The banter is brilliant. We organise all kinds of events: some raise money to spend on good causes, and on others, like the town bonfire, we get stuck in up to our elbows.
If you still think it’s a secret society, come to the Old Post House on Thursday and see for yourself (let me know beforehand so Roger knows how many lunches to make).
Now, when I told fellow Rotarian David Bleazard last week that I’d reached my initial fund-raising target of £20,000 he said, with a nod and a wink, “Don’t shave the beard off yet – keep it on till the next meeting.”  My imagination began to run riot – perhaps a scantily clad young lady with a cut-throat razor and lots of shaving foam?  What did he have in mind?
It was therefore with some trepidation that I went to the meeting yesterday. Ron Duxbury, the District Governor was attending – ah, now before you start thinking – let me say that ‘District Governor’ is a very posh title which I really don’t like. If you have a lot of similar clubs, then just as when you have a lot of shops, like Superdrug or Marks & Spencer, you need an area manager, so things can be organised properly. That’s all a ‘DG’ is – an area manager. Only he does it for fun and doesn’t get paid. And he comes from Barrow-in-Furness.
And it turns out that David Bleazard’s ‘don’t shave off the beard’ tip was a complete red herring – he was just throwing me off the scent, and he’d done it very well. As soon as the pork, carrots and potatoes had been polished off, the DG presented me with a Paul Harris Fellowship.  Paul Harris founded Rotary International over 100 years ago and a PH Fellowship is a very prestigious award (at least in Clitheroe and most of the UK – I believe there are countries where you can buy one, a bit like peerages used to be!).  I made a little speech and wished I’d put a tie on.  Then the club gave me a cheque for £1,000 for Cancer Research UK. 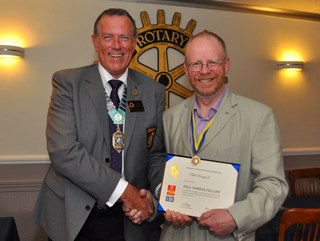 So there’s me, dead chuffed, thinking ‘What’s Val going to say when she finds out I could have shaved this beard off a week ago?’ It didn’t take long to find out, because when she got home to the news she said she was very proud of me and then went to get the razor!  As you can see from the photo, I’m now got my clean-shaven look back. 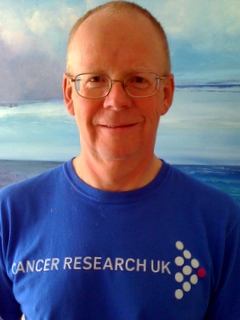 Two more things – tonight is the Rock At The Castle Gig with Waltz Invention, Blues Dudes and Freebird – with a share of the proceeds going to Cancer Research UK – so please come along and enjoy yourself – I’ll be there! 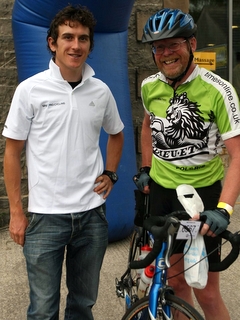 Secondly, when I finished the Cross Pennine 100 mile bike ride the weekend before last there was this Welsh cyclist chap there – told me he was the highest placed British finisher in this year’s Tour de France – so I told him I’d cycled twice as far round the coast of Britain, only a bit slower! So Hi to Geraint Thomas MBE!  Nice chap and doing a good job supporting Action Medical Research.
Er - just like Monty Python's Spanish Inquisition Sketch - Three more things - I've now raised over £22,300 for Cancer Research UK - now I know the initial target was £20,000, but could we make a big push now for £25,000? Why not? If you CAN donate, go to http://www.justgiving.com/Bill-Honeywell - thank you!
Posted by Bill Honeywell at 09:57