The Adventures of Bat-man

It has rained here all week. I mean, all week. Until lunchtime today, when for a while there were some patches of blue sky whilst it was still drizzling, then it actually stopped and it felt quite warm.

I quickly got changed, pumped up the tyres on the bike and set off around my favourite circuit – about 26 miles around Sawley, Bolton-by-Bowland, Wigglesworth, Forest Becks, and back.  With a nice tailj-wind to start with, I was soon passing the ruins of Sawley Abbey, crossing over the River Ribble and heading along familiar lanes.

Autumn is here and the sloes are ripe on the Blackthorn bushes in the hedgerows. I made a  mental note of where the big crops are in case I decide to make some sloe gin.  Stump Cross Lane featured in the local paper this week when someone described it as the dirtiest road in Britain – full of cow-muck!  Whoever it was hasn’t been on too many roads I guess – I’ve seen a lot, lot worse on my recent travels, but today I was unlucky enough to come across the culprits. The farmer was taking his herd of cows along the road after milking and I got stuck behind them for five minutes.

There’s been correspondence in the national press along similar lines – someone on holiday in Polperro complaining bitterly about the smell of fish (!). One letter replied with a lovely story about a man on holiday in the Scilly Islands. He called at the shop and asked for a newspaper. ‘Yesterday’s or today’s?’ he was asked. ‘Today’s please’ he replied, naturally enough. ‘Well come back tomorrow!’ was the answer. Excellent! 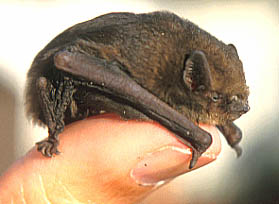 On arriving home I found a bat lying on the patio – rather like a bird, stunned after flying into the window, but it hadn’t.  It was alive but very dozy, so I placed it somewhere warm and sheltered, and it soon disappeared into safety.  Pipistrelles (which is what it was) are tiny – a lot, lot smaller than a field mouse. I could see its heart beating; its fur was fine and smooth; the back legs were as thin as needles, with delicate toes and claws; and the wings are incredibly long, folded, with a single long claw on the elbow joint. Bats aren’t blind – it had tiny bright eyes and would blink now and again.

By coincidence, when John came to partition off the shed – to make a compartment for the hens, complete with perches and nest boxes, he found another pipistrelle clinging to a small piece of wood inside.  I put it on top of a wooden arbour nearer the house and soon it had crawled around so that it was hanging upside down from one of the columns.

A lot of bats flutter around the pond at dusk – they’re great to watch from out of the living room window – and as well as pipistrelles we get a larger species which dips down almost to the surface of the water, presumably catching low-flying insects.  I think they’re Daubenton’s bats, but I’m not sure.  Must get one of those bat-call gadgets so that I can identify them.

Just as predicted, the weather looks like it will get wild for Sunday when we have the post-ride barbecue.  I need to get the meat and booze tomorrow, and also pick up the motorhome which has been in the garage since the day after I got back, for repairs to the damage caused when the tree fell on top of it near Fort William. Brother-in-law Keith will be pleased – he wants to borrow it tomorrow night to go down to the Stock Car World Championships at Northampton!

Finally, BBC Radio Lancashire rang when I got back from the bike ride this afternoon – they are doing a piece on Monday’s Breakfast Show with Graham Liver, on surviving bowel cancer, and want me to do a telephone interview just after 8.00 am.  I’m getting used to these radio appearances, they’re good fun!
Posted by Bill Honeywell at 20:45