So what’s happening?  Well, once I’d been back for a few days after the Big Bike Ride around the coast, I found that I was rather fitter than before I started. No surprise there. Not wanting to slip backwards again I’ve kept up the cycling, including two Cycle Sportives of 100 miles each, and I’m doing another – The Christie Hospital Manchester 100 – tomorrow, which also happens to be my birthday.

There is a breed of cyclists who, despite the obvious pain and general discomfort, love to cycle up hills. I think I’m one of them, even though I’m no good at it: on the Clitheroe Bike Club forum there’s a league table of times for Waddington Fell – a Category 1 climb in cycle racing circles: the fastest time is 15:44, I think.  My fastest time is a snail-like 20:08.  I’m no Brad Wiggins, that’s for sure.

But this week on a grey, chilly Wednesday morning, I cycled to Settle on the edge of the Yorkshire Dales, then up the 1-in-5 Langcliffe Scar, past Penyghent to Halton Gill, Litton, Arncliffe, and back over the 1-in-6 climb to Darnbrook, Malham and then back home. And afterwards, I felt really good – weird, isn’t it?  The scenery, the villages, everything about this part of the Dales, are simply sublime. Had I stopped at The Falcon in Arncliffe (I didn’t), I would have been served beer out of a jug, really. 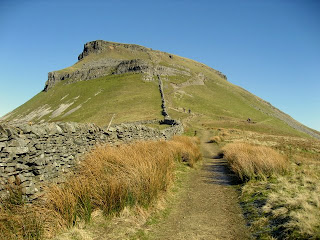 Penyghent from the Pennine Way

I wish I could say that all motorists shared my enthusiasm for this form of two-wheeled transport, but alas, ‘tis not the case. The majority are decent, polite and courteous, slowing down on narrow lanes and giving the cyclist sufficient room when they pass.  But there are others who treat cyclists like something they’ve just stepped in. It’s a little disconcerting when the approaching large vehicle maintains a steady ramming speed as it gets ever nearer, or when a Chelsea Tractor leaves only a hair’s breadth as it overtakes. Perhaps the drivers think they are entitled to do this because I don’t pay Road Tax. Well I do, actually.

I’ll wrap this up now – the Manchester 100 starts at 7.30 am from Wythenshawe Park so I need to be out of the house by 6.00. An early night’s in order I think! I’ll put some statistics from the Big Bike Ride in the next blog, hopefully.
Posted by Bill Honeywell at 20:30