Rannock Sheep (and other breeds)

I started the morning with a bit of Breakfast TV (as usual) – today there was a piece from Skipton Auction Market on the rise in sheep prices.  Skipton is only 18 miles from where I live, and as it happens I know the auctioneer there – or more correctly I did know him, because John Hanson retired this year.  He doesn’t look old enough.

The reason I know him is because a few years ago he asked me to speak at the Annual Dinner of the Rannock Sheep Breeders Society - now held at the Millstones near Blubberhouses, between Skipton and Harrogate - but at that time the venue was the Hopper Lane Inn (also at Blubberhouses).  I’d spoken to Ribblesdale Farmers and Settle Farmers before, but hadn’t heard of the Rannock Sheep Breeders, and thought it must be a breed of sheep I’d never heard of. 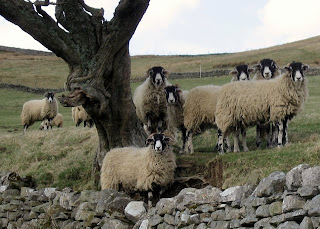 On the Pennine Way near Keld three years ago - these are Swaledales, by the way...

That’s because I’m from Lancashire. I can hear you Yorkshire tykes laughing already.  A rannock sheep is just another name for a bad ‘un.  Or, if you don’t mind me mixing metaphors, if you’ve bought a rannock sheep, you’ve bought a pup.  Hence the subtle Yorkshire irony in the name of the organisation – because clearly no-one would set out to breed rannock sheep.

Anyway, I turned up at the Hopper Lane Inn to find a group of around forty farmers, auctioneers, cattle dealers and so on congregating in the bar, ready to give me a warm welcome. After a hearty dinner, which consisted of a Yorkshire pudding starter, main course of roast beef and Yorkshire pudding, and finally, Yorksh apple pie and custard, it was time for me to stand up and entertain the assembled throng with around 45 minutes of amusing anecdotes and the odd risqué joke.

It seemed to go very well. When I’d finished, John Hanson stood up to thank me and then, to my surprise, asked if anyone else had any good jokes to tell.  There then followed at least another hour of side-splitting humour as members recounted their own stories, and several jokes which were a lot more risqué than mine!  It was without doubt one of the best nights-out I’ve had!

I was then given the heart-warming news that I was a lifelong honorary member of the Rannock Sheep Breeders Society, entitled to come to each Annual Dinner, with or without a guest, and it’s now an annual fixture in my diary. The format remains the same, so I always go armed with a few new jokes for the after-speaker entertainment! 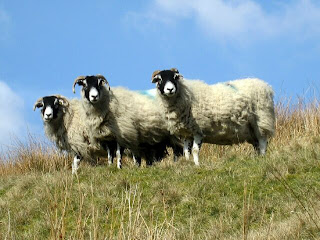 My favourite sheep photo - on Gayle Moor, while walking the Ribble Way, 2007.

Getting back to the original subject of sheep, I’ve known for a while that the cost of getting sheep clipped (sheared if you’re from down south!) has been more than the price obtained for the fleece – about £1.20 against around 40p. It’s a disgrace.  Now the price of the wool has tripled and it’s possible almost to break even.  The price of sheep has also gone up because of the value of the meat.

What I found difficult to understand was the carpet manufacturers (who take  most of the wool) saying that it was getting too expensive and that they would have to look at other (synthetic?) materials as a substitute. Well, £1.20 a fleece still doesn’t sound that bad to me, when a good wool carpet can cost well over £30 a square meter! But then, what do I know about economics?...

…There was a bit of a furore a couple of years back when it was discovered that the question paper in the final Economics exam at Cambridge Universtity was identical to the paper about five years earlier. Clearly, students who studied the past papers would have had an unfair advantage. The day after the story appeared, there was a letter in the Daily Telegraph from an economics professor. In his view there was no problem – the questions might have been the same, but after five years – the answers would be completely different!
Posted by Bill Honeywell at 19:36