You may have seen a news report today about hundreds of young Manx Shearwaters being rescued from rough seas off the Pembrokeshire coast.  The weather has certainly been severe – but even so, it seems odd that birds which should be used to such conditions got in such trouble.

Probably the biggest breeding colony of Manx Shearwaters in the world is just off the coast of Pembrokeshire, with roughly 50% of the world’s population – 165,000 pairs - nesting on Skokholm and Skomer, its near neighbour.  Quite a few people visit Skomer as it is easily accessible by a daily boat service, but Skokholm is a different matter.  From Broad Haven the Dale Princess would travel across to Skokholm on Saturday and not return until the following Saturday. 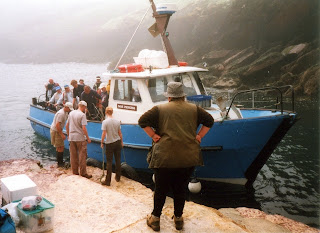 The Dale Princess arriving at Skokholm

I’ve been three times to stay for a week.  For some reason, Val has never been interested in accompanying me.  This could be something to do with the fact that there is no running water and no electricity.  Lighting in the old farmhouse, originally occupied and renovated by Ronald Lockley many years ago, is by gas, and the only way to get a wash is to do the dishes and then use any unused hot water left over in the boiler!  The chemical toilet doesn’t sound too enticing but spirits are lifted by the paintings of birds which people have doodled on the walls! 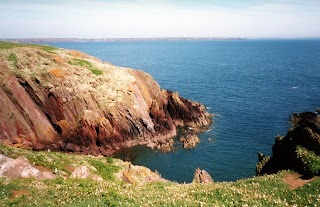 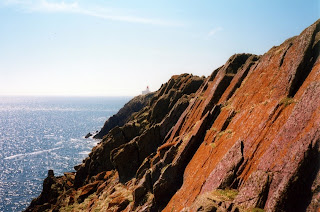 It is a magical place though, despite the privations.  Measuring only a mile or so long by half a mile wide, it’s easy to walk around in an hour or so, but the main thing is that it’s a fabulous place for relaxation whilst enjoying the bird life which is all around – as well as the Manx Shearwaters there are Puffins, Guillemots, Ravens, Choughs and lots more. 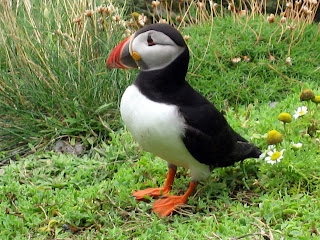 There’s only room for a dozen or so visitors, and the accommodation is pretty basic – I’ve stayed in the outside huts, and also a dampish room in Lockley’s farmhouse.  The first time I went there was an evening routine of reviewing all the birds seen during the day.  As the names were read out on the first evening, Gus, a Dutchman and keen birder holidaying with his girlfriend, said “Loos and I had a Shag on the boat on the way here.” and wondered why the room erupted into laughter.  I told him you can ‘have’ a Gannet, or a Razorbill, or a Cormorant, but you ‘see’ a Shag – and explained why.  Lovely language, English.

Skokholm is owned by the Wildlife Trust of South and West Wales, and recently they have undertaken an ambitious programme of refurbishment, which was well overdue. Now the lighthouse on the island is for sale – Trinity House want £100,000 for it – and the Trust is doing its best to acquire it to safeguard the future of the island and return it to its original status as a bird observatory.

If you want to know more, you can visit the Trust’s web site at http://www.welshwildlife.org/skokholmIntro_en.link
Posted by Bill Honeywell at 17:47