I’m alright today.
I had a good response to my ‘revelations’ in yesterday’s blog.  A couple of weeks ago I was able to help an old friend – recently diagnosed with bowel cancer – on what to expect, and following my explanation yesterday I was contacted by someone else whose close relative is finding it difficult to come to terms with their recently-created ileostomy – and of course if I can be of any help I’ll be delighted.
Another important matter taking place yesterday was the relocation of our garden shed from near the house to the bottom of the garden, in anticipation of Val acquiring a few hens – an ambition she has held for some time.  I got out of the heavy labour due to my frail condition!  My main concern, when in due course the chucks arrive, is to keep them out of the grip of Monsieur Reynard.  I’ve already seen foxes nonchalantly strolling across the field behind the house, so I’m sure we’ll get a visit before too long.  A friend of mine has a security hatch on his hen hut which is controlled by a photo-electric cell – as it’s going dark, it shuts tight. Chickens only get left outside once, apparently – after that (assuming they survive) they make sure they obey the electronic curfew!
It’s surprising how much wildlife there is – on the day I got back from the Big Bike Ride there was a Roe Deer in the field behind the house, whilst on Saturday I looked out of the kitchen window just in time to see a male Sparrowhawk fly off with a Blue Tit in its talons – nature ‘Red in Tooth and Claw’ indeed.
Last night my brother Richard and his wife Sue called in on their way back to Macclesfield from a day in the Dales which included climbing Penyghent. He mentioned that there might be another ‘Bothy Trip’ in October. The last one, to an awesome, snowbound Ben Alder in March last year, was great fun but hard work and soooo cold, as the photos will hopefully testify.  Bothies are about as primitive as you can get – no electricity, water or even any kind of toilet (just a spade – don’t ask!) – but there is no escaping the sense of adventure. 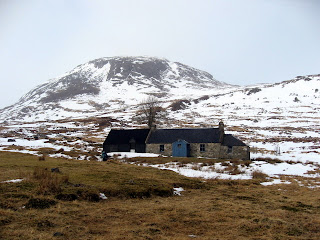 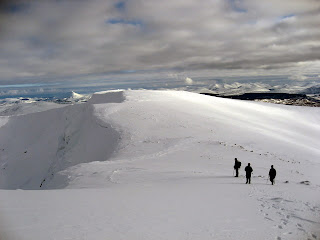