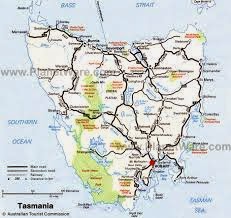 Saturday 8 February - I can't believe it's so long since we left the UK, during which time making contact with home hasn't been as easy as one would expect in this day and age, so having woken up before the alarm I decided to hang the expense and ring Val.  She was a bit surprised to hear from me I think!  7am in Tasmania is 8pm in the UK so it's not a bad time to ring.  It seemed that everything was in order so I got dressed and headed for breakfast.

When brekkie is included there's always that temptation to go for the Full English, but I got over that a long time ago.  I was walking the Pennine Way, stopping at B&Bs on the way, and although I never have a cooked breakfast at home I felt, as most of us do, that having paid for a full English I'd jolly well stoke up on one.  After about 10 days I'd had enough and when one host offered a continental with lots of fruit I went for it and have never looked back!

We'd left our bike storage bags at the motel to be collected on our return, so now we packed up everything for the next two-and-a-half weeks in our panniers and after a very brief briefing from Tour Leader Richard Dugdale, set off on our adventure.

The first couple of miles followed my walk of yesterday, along the off road path / cycle track, but at Coles Beach we continued straight on to the mouth of the Don where, at a car park, there was a strange collection of pebble sculptures.  Each pebble looked like it was carefully and precariously balanced on the one below, and very soon Helen found that this was indeed the case.  I'm referring to the word 'balanced' - there's no cement or glue, and when Helen touched one it fell off and, try as she would, she couldn't put it back without it falling over!  Oops!  Exit stage left. No doubt some skilled person would soon have it back in position!

Over the rickety Sawdust Bridge, then under the main Bass Highway, uphill and out of Devonport towards Ulverstone (I don't know about you, but I find all these British place names confusing, particularly as they bear no geographical relationship to their counterparts back home.  Devonport is on the North coast and sits on the River Mersey (and also the Don), Ulverstone has an 'e' on the end, and later on we were to find Launceston and Exeter both on the River Tamar. Very frustrating!) 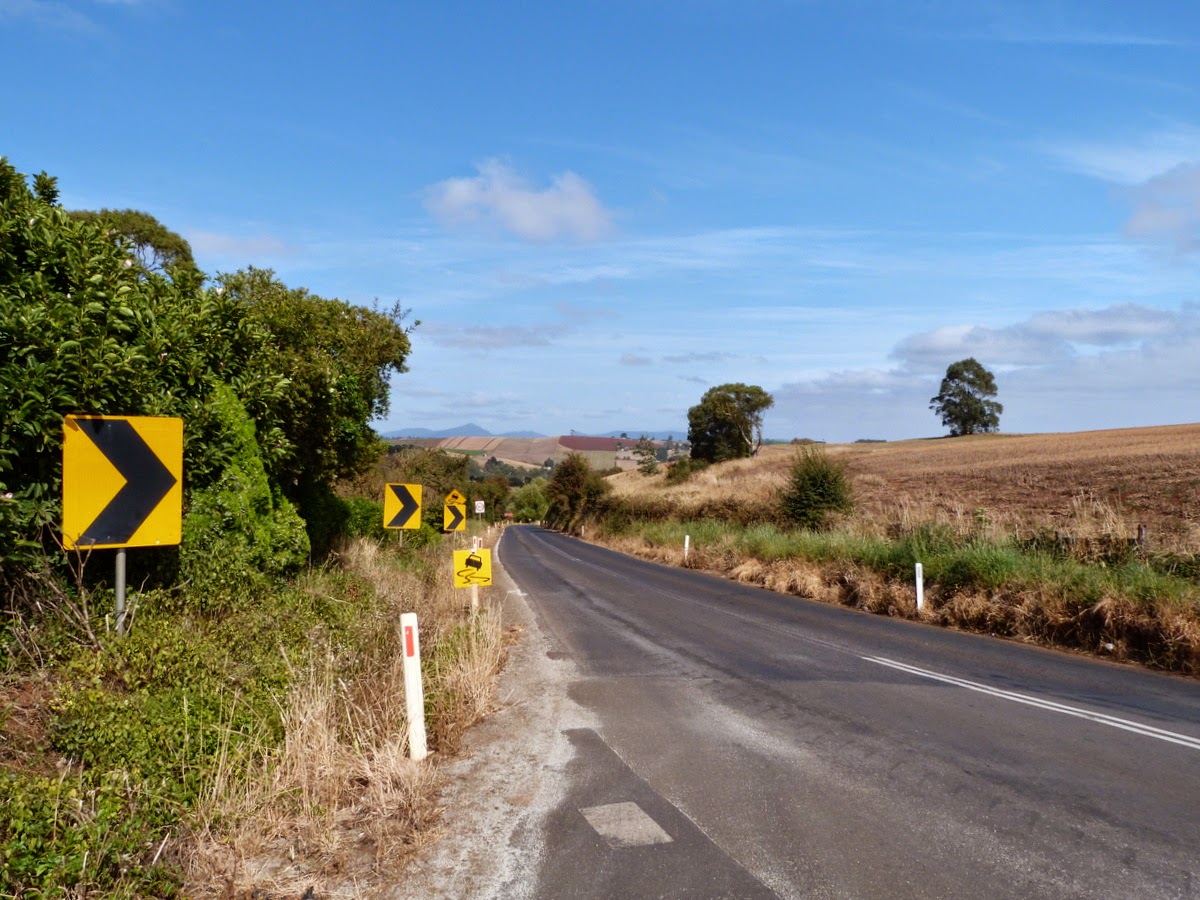 The country was agricultural and soon we passed through the village of Forth, where there was a river (we crossed it on the Forth Bridge I presume...) then everyone missed a junction to the right and carried on to a busy highway, with our intended route, another off-road cycleway, over on the other side. Because John Hartigan was behind us I volunteered to retrace our steps to find him and go the right way, whilst the rest of the party took a shorter route to get back on track.  I found John without any trouble and we all soon met up again. 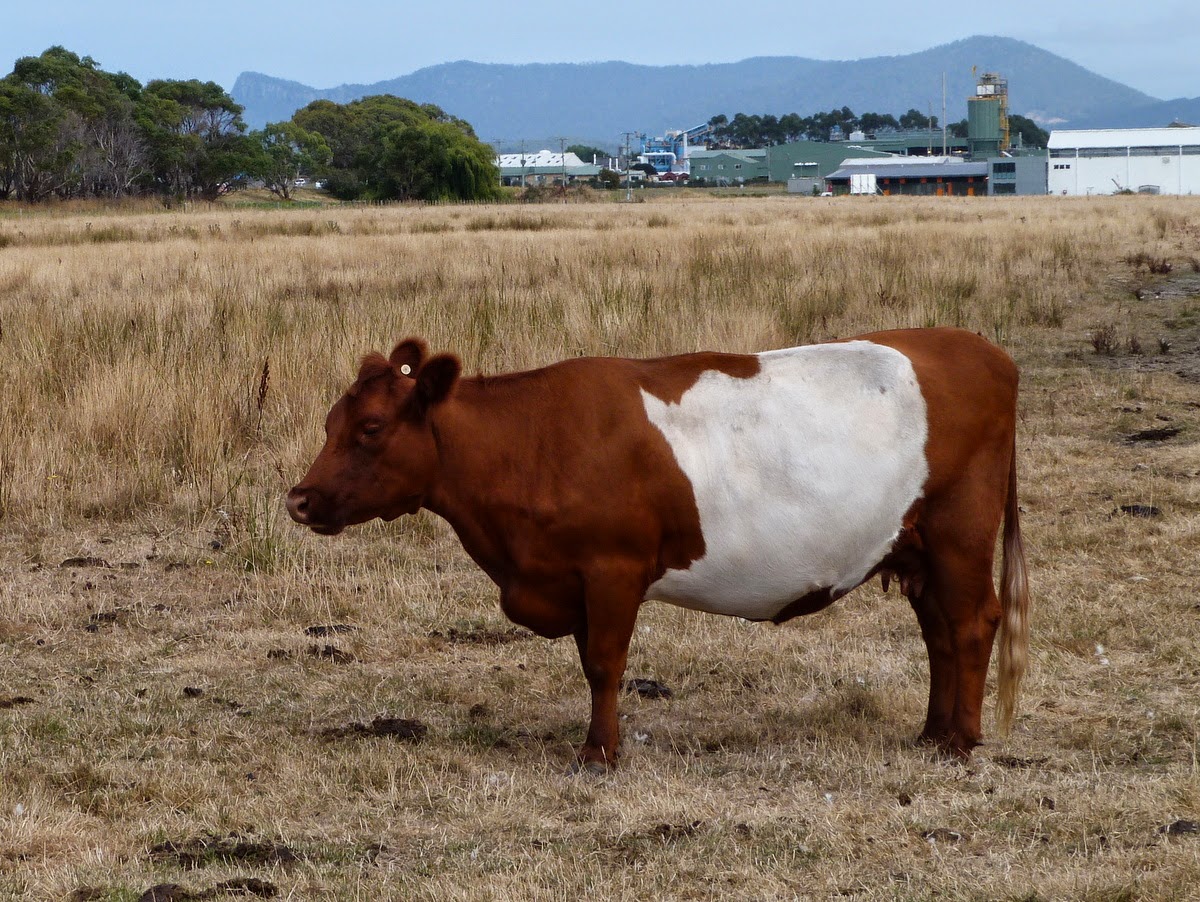 By this track were Galloway cattle, Tasmanian Wild Hens (like a big Moorhen) and at a railway level crossing, a group of trotting ponies being coaxed across. 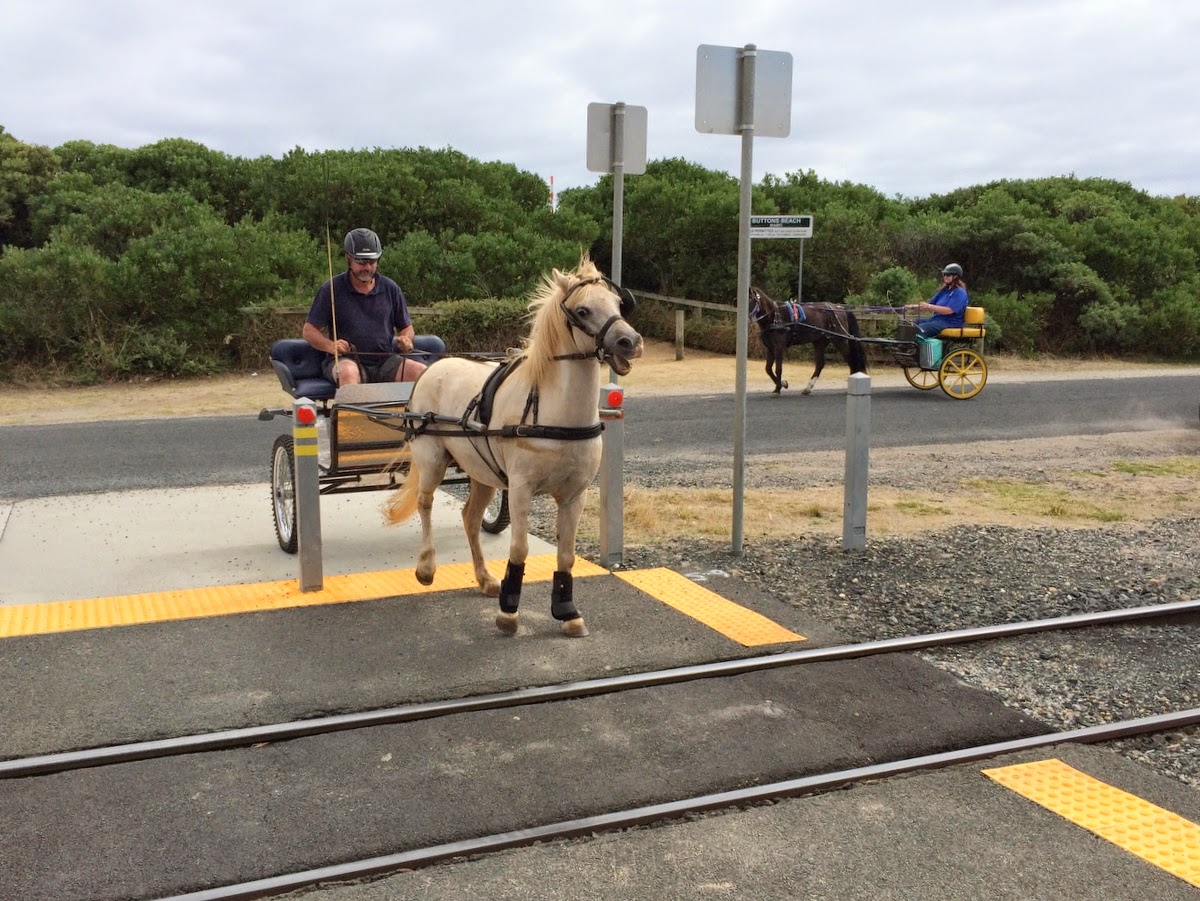 Time for a coffee stop at Banjo's in Ulverstone, a quick look around town including the War Memorial, and off again. 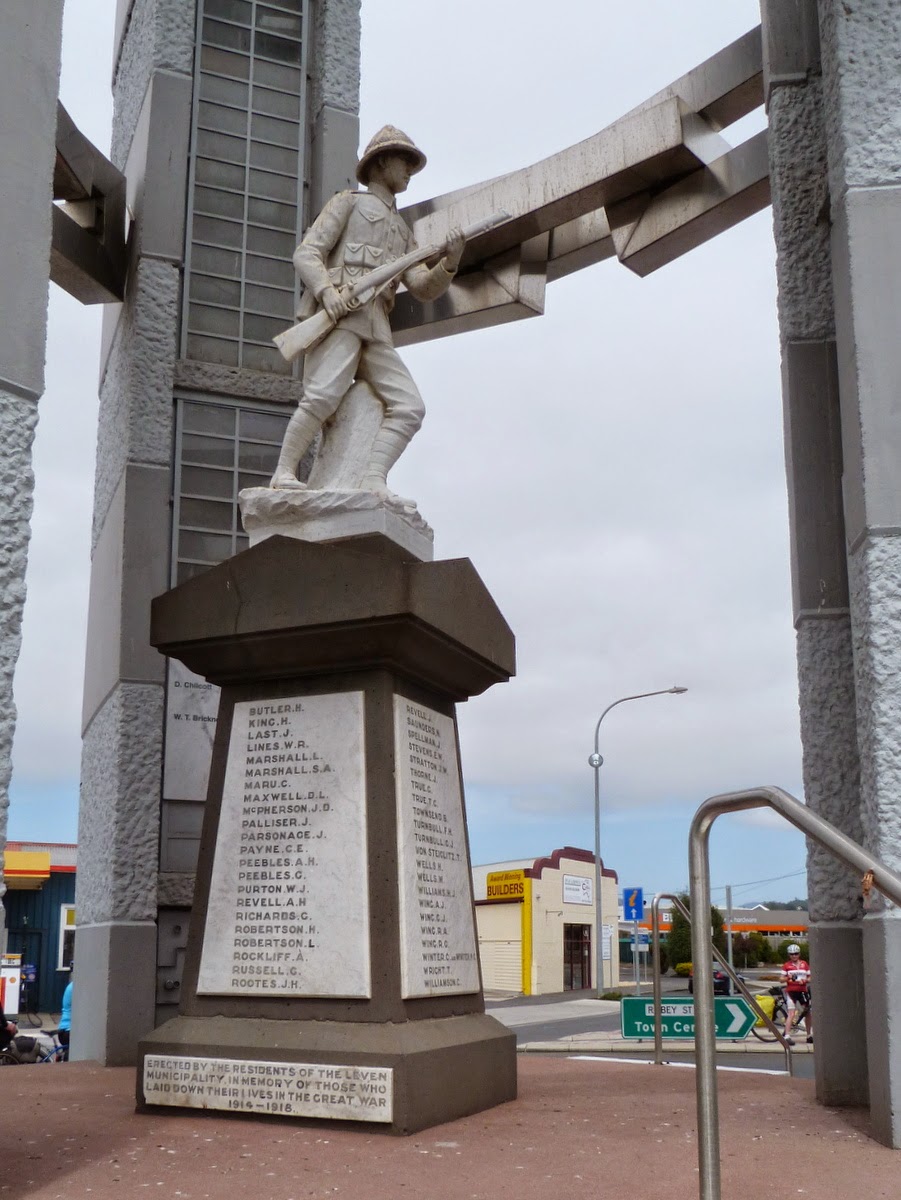 Tasmania is at around the same latitude as the south of France, but the climate is affected by the fact that the island is surrounded by the cool Southern Ocean, so much of the time it's a bit on the chilly side compared to what you might expect, but when the sky is clear in February (it's their summer of course) the sun does a pretty good job of heating things up quickly, and 'things' include cyclists.

Unlike the UK, many of the cafes and restaurants don't have their own toilets. This fact is compensated for by the presence of lots of public toilets. It's something you soon get used to.

The road then took us along the coast to the town of Penguin, which lives up to its name by having replica penguins absolutely everywhere - on rubbish bins, on every building, sign and so on. You know you're in Penguin.  On the way Richard mentioned to look out for whales out to see, but they either weren't present or were being very shy, and we weren't delayed. The penguins are Little Penguins (once known as Fairy Penguins), not the most northerly of the penguin family (that honour goes to the Galapagos Penguin) but still nearer the Equator than the South Pole. They breed in burrows in dunes and soft earth near the sea, and the parents come ashore at night to feed the chicks. 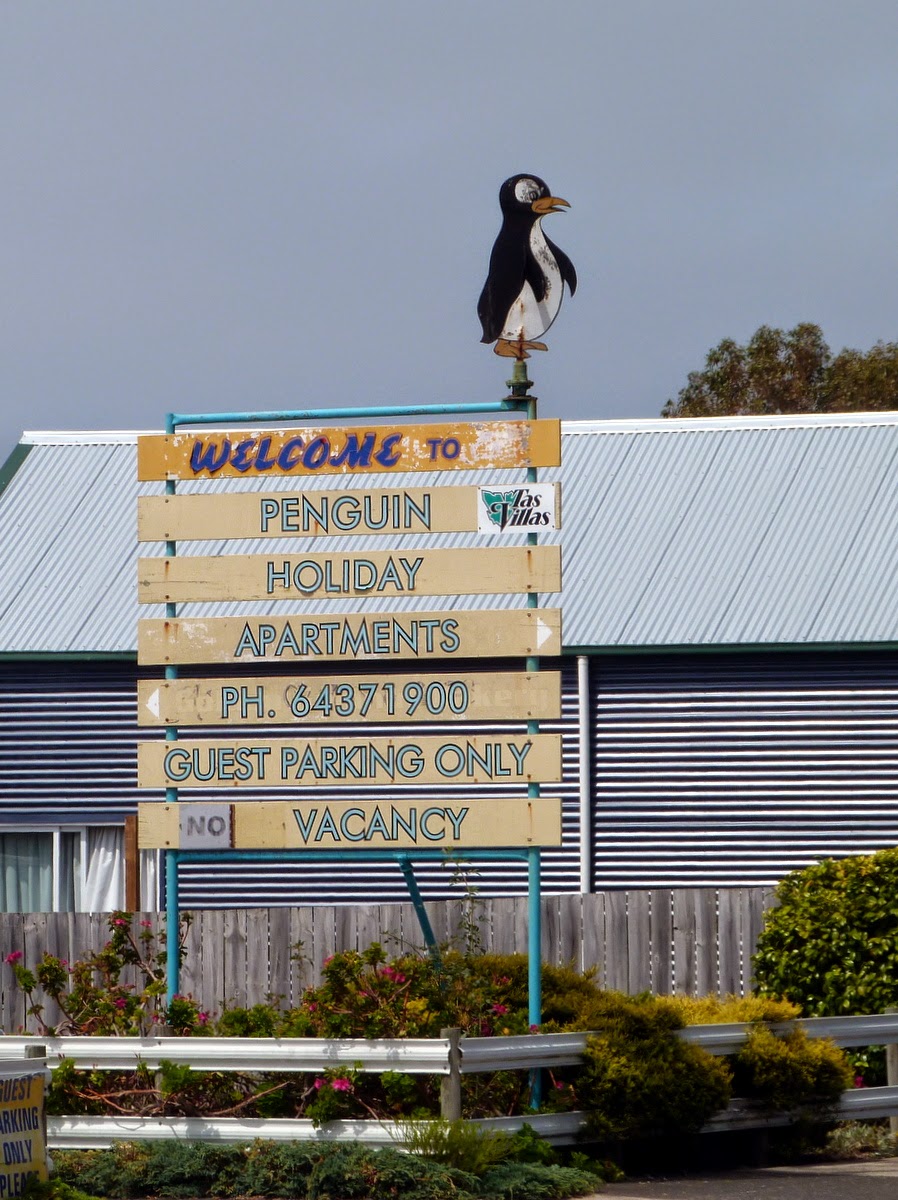 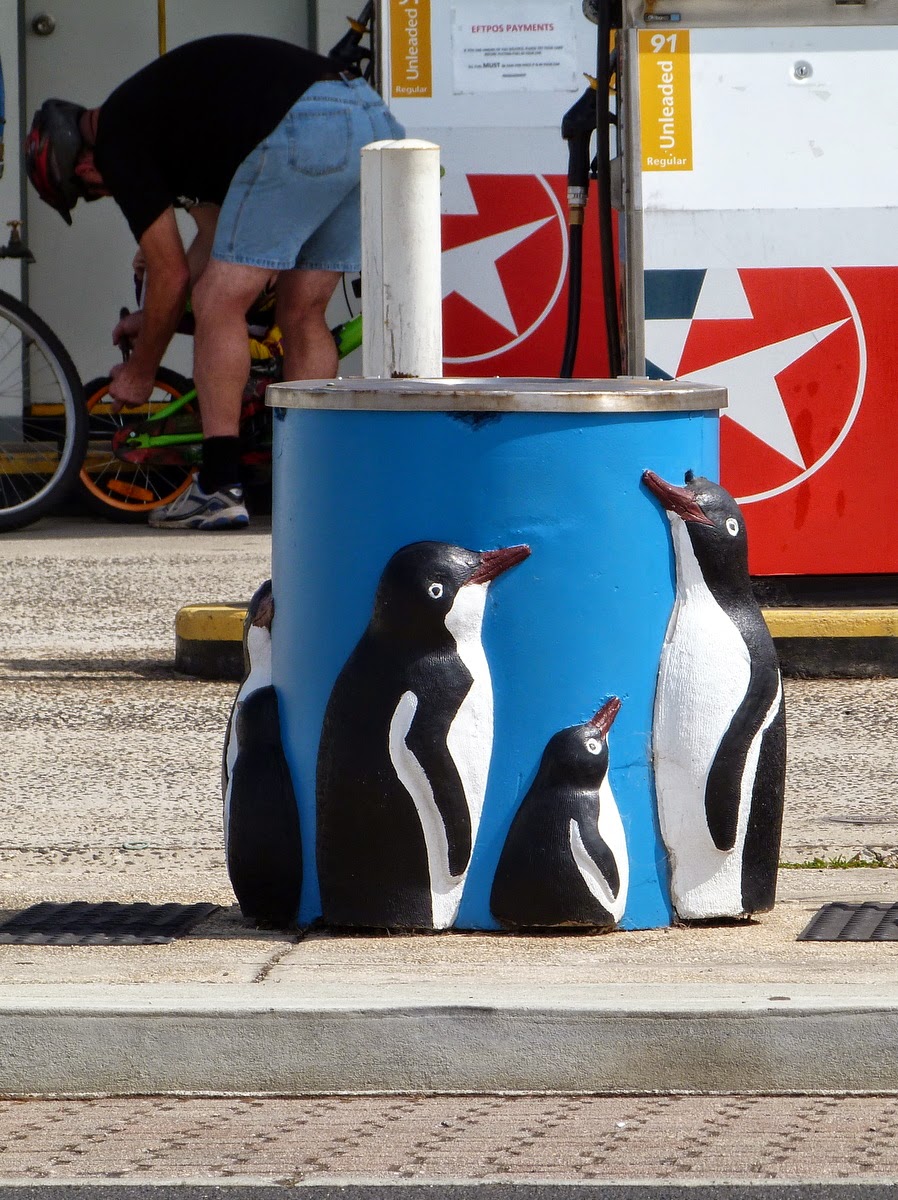 Arriving at our motel I found that the four single men (me, Ken, Richard and John H) were billeted in one room (or suite) with a double, two singles and a couple of bunks. After some discussion and flipping of coins I ended up with the double bed. I couldn't be sure but I got the impression that Ken might have been a bit disappointed. 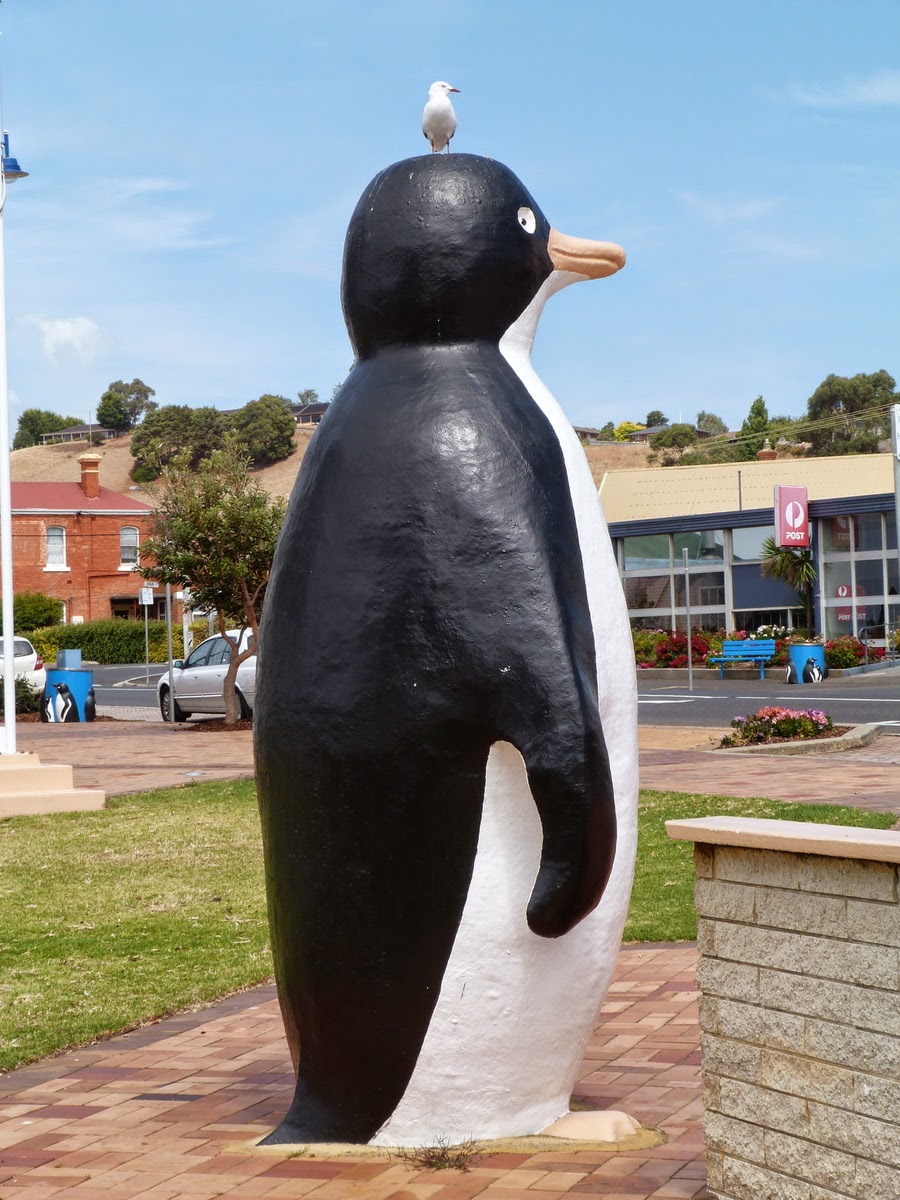 For the rest of the afternoon (after more coffee and cake) I looked around the town and its many plastic penguins, then later we all headed to a Thai restaurant which was excellent. They didn't have a licence though, which necessitated a visit to the nearby bottle shop beforehand. Afterwards we went looking for real penguins in the dark. We'd been told that they could be found near the caravan site on the edge of town, but I reckon we were given duff information as the habitat was all wrong and not a penguin was to be seen. But it's surprising how many caravanners sit out under their awnings until well after dark - very quietly, almost spookily, as you walk past, unless you shout a brave 'Helloo'!

A short day - 24 miles, but tomorrow would make up for any lack of mileage (or effort) with a long hilly ride to another place with a familiar name - Sheffield - with a visit to a wildlife park on the way. It's beginning to feel like a cycle tour.