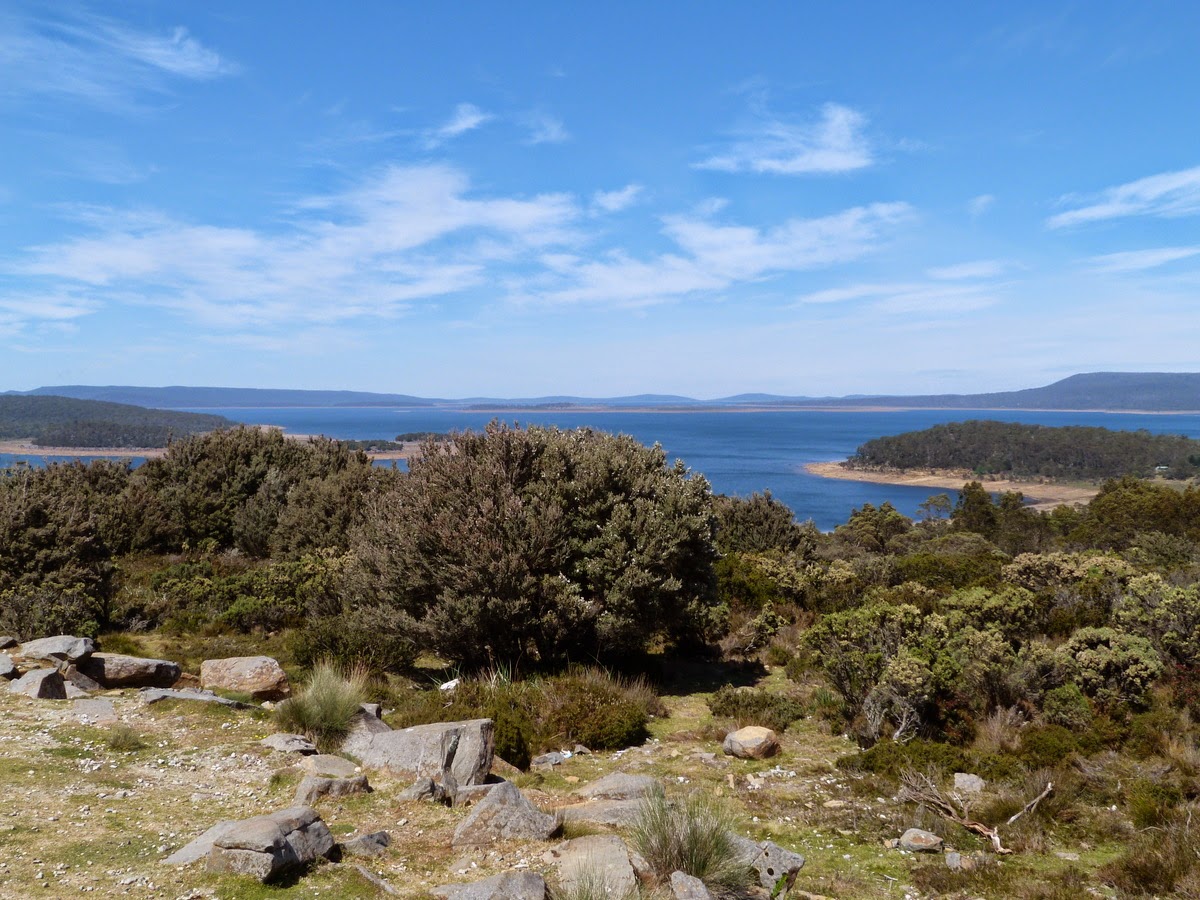 Wednesday 11 February.  My usual morning ritual of loading up the day's route on to the Garmin didn't quite go according to plan - when I tried to look at it, the screen said I was in Libya.  Near the Egyptian border, to be fair. Of course this caused me some consternation - I had a good look around and was sure I was in the same place where I went to bed last night, and as there was only one junction on the whole day's ride today I reckoned I could cope without satnav!

I went for some breakfast and found that Ken had already set off, concerned that the prospect of a long climb and gravel roads might make for a long day.  Leaving Deloraine on the A5 we passed road works and rode through fields before keeping left at the only junction and entering woodland where Cockatoos were squawking and Kookaburras laughing.

The road started to climb and then dipped briefly through the hamlet of Golden Valley (they do have some lovely names!) before settling into a serious ascent, not steep at 6-10% but relentless.  A left turn was signposted to Liffey Falls and a few riders decided to have a look, though it was quite a long rough detour and opinion was divided as to whether it was worth it.  When we had set off Richard said that he wouldn't recommend it, so of course who decided to go? - Richard, of course!

Quite a few of us were quite close together at this point, when Irene spotted an Echidna at the roadside and of course we stopped to have a look at this large, long-nosed, snuffly, egg-laying hedgehog-type thing.

I expected the road to top out at about 1,000 m but it kept on climbing to an impressive 1210 m instead before levelling out in quite dramatic scenery with big rock outcrops and small lakes.  A gravel car park with information board and overlooking Great Lake appeared so we decided to have a lunch stop (bread roll and banana for me again!)  It was lovely and sunny now, and quite warm too.

At this point the road turned to gravel for about a mile, including some nice downhill hairpins, then back to tarmac as it passed through several miles of cabins, static homes and other generally shabby stuff a bit reminiscent of Dungeness.  Presumably lots of these were weekend fishing retreats, but others had a certain Bohemian appearance. 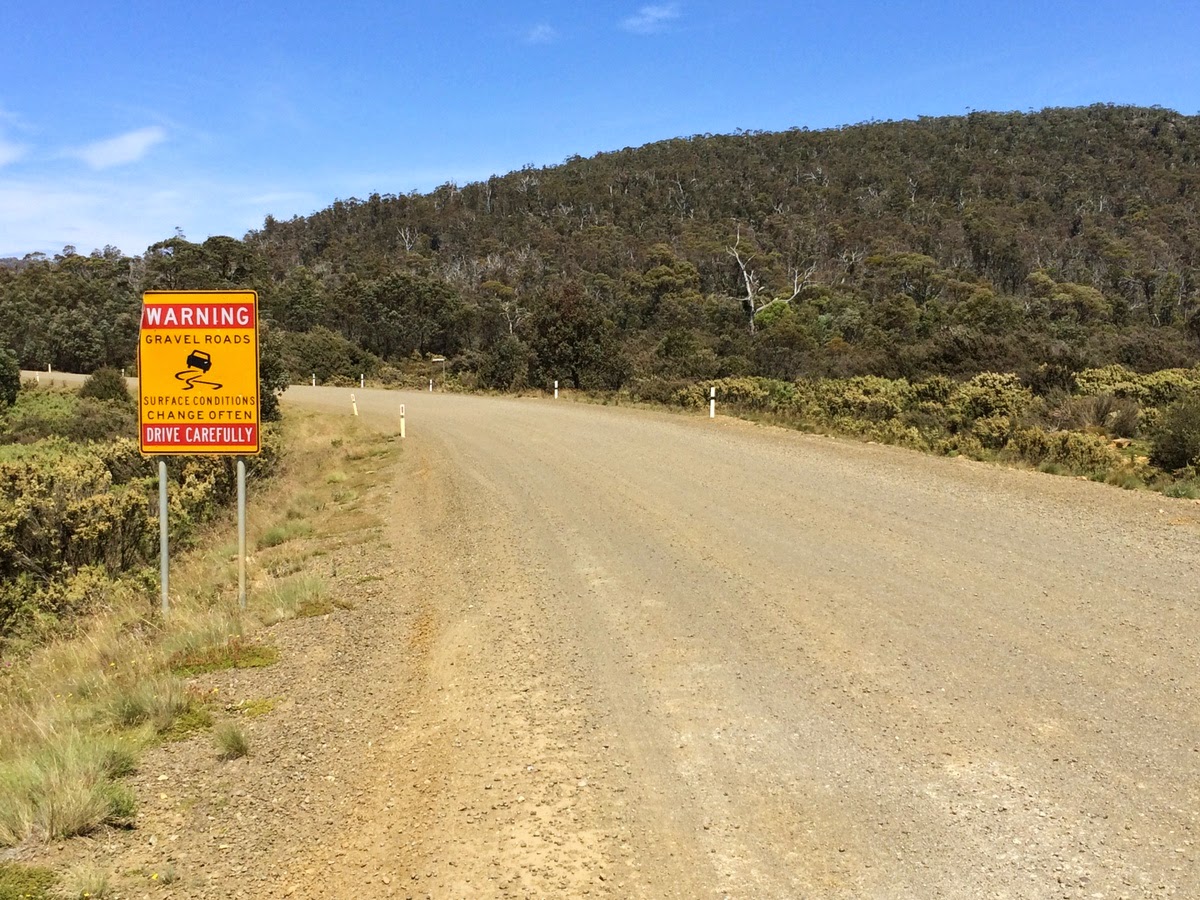 Further on the road reverted to gravel once more, this time for 19 km, but the surface was quite good, just needing a bit of concentration to keep away from the occasional stretch of 'washboard'.  Most passing cars slowed down, and the ones that didn't received a dusty curse! Then what was this strange feeling? A tailwind? Now that doesn't happen very often, but it was very welcome. In fact towards the end of the gravel I was spinning along at 20+mph which was a great feeling! 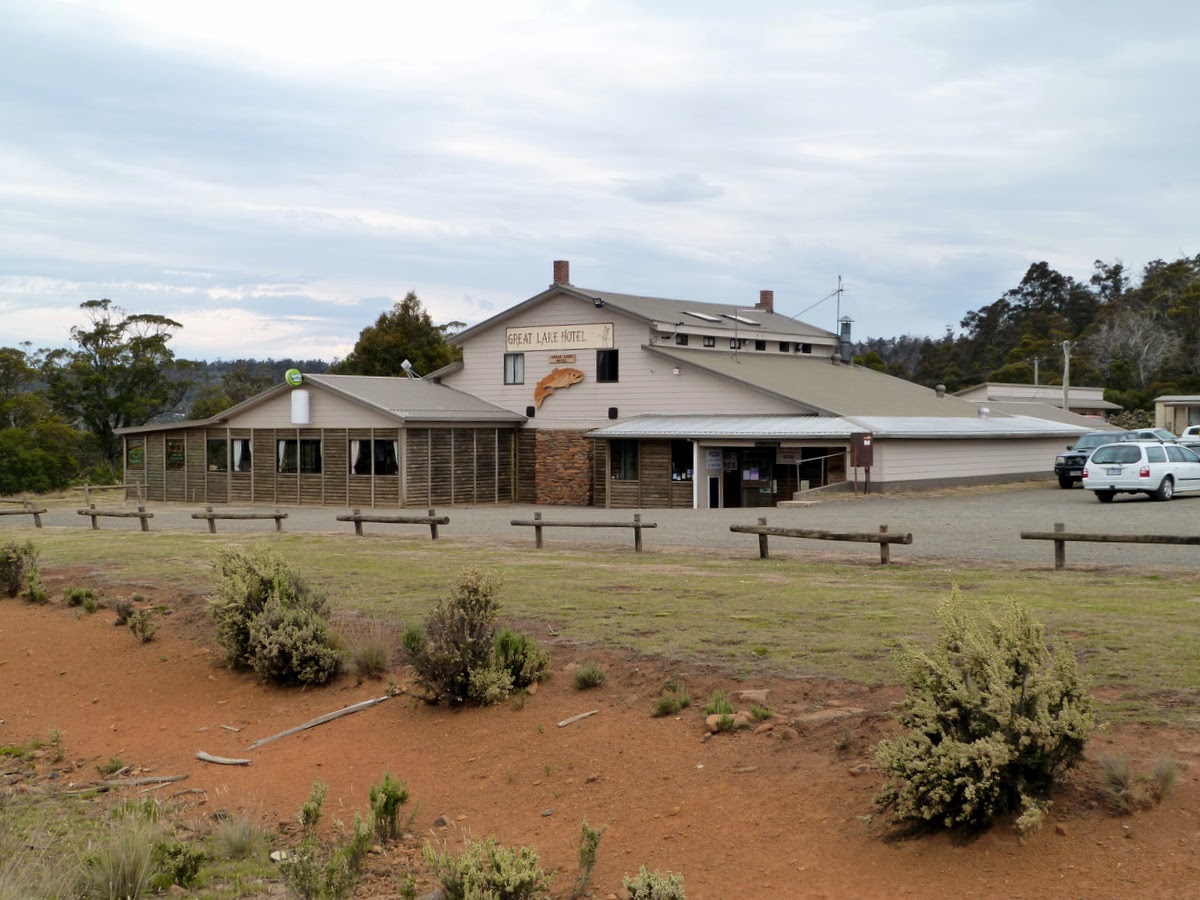 The only one of our group at the Great Lake Hotel on the outskirts of Miena was Helen, and she was quenching her thirst in the bar. I ordered a pint of lager shandy ($7.50!) and got 15 fl oz. On further enquiry from the bar person lady it turned out they only did 10 oz or 15 oz:  this was the first time I'd come across this practice, which I was to find is commonplace in Australia.  Now, I thought our Aussie friends were big drinkers, but if they're only quaffing these 'stubbies' it suddenly becomes less impressive!

Later in the evening I ordered "Three-quarters of a pint of James Boag's please". I don't think the bar person lady was amused.

Our rooms were quite small and looked rather like stables from the outside. I decided that my saddle needed raising by about a centimetre, so slackened off the pinch bolt, lifted the saddle up, tightened the bolt and "bang!" - it sheared. I realised this was going to be a problem, as without it the saddle not only drops 6 inches (much too low) but also there's nothing to stop it swivelling. And pinch bolts aren't the kind of thing you carry as a spare.

I went into the bar and asked if there was a hardware store in town. No chance. Someone said he could look in the back of his pickup, so out we went to have a route around. We found a bolt but no nut, then another with the nut almost completely rusted on. I nipped over to the little store by the petrol pumps and with the help of lots of WD-40 got the nut to turn. But then, back at the bike, the bolt turned out to be too short. Just then a couple arrived at a nearby room (stall?) and the husband asked what I was up to. So he had a route around in the boot of his car and found a coach bolt (and nut) which were a perfect fit apart from being two inches too long. Then he found a small hacksaw. Brilliant!  Five minutes later the job was neatly finished and to my relief I had a serviceable bike again.

We had a jovial dinner at the hotel. I had the world's largest pizza, which the chef said he cooked himself and I don't believe a word of it - it arrived in a big cardboard box and was obviously put together in a factory. I'll accept that he re-heated it himself... Before dinner UK John had been totally frustrated by the bar person lady serving all the locals before him, even though he was there first. Both parties were getting a bit annoyed with each other. Later I spoke to her very nicely and got some extra Weet-Bix for our in-room breakfast. One needs the calories.

Total mileage now 155, with a run to Hamilton tomorrow that looks interesting.