Day 11 - Hobart to Triabunna with a proper cafe stop on the way! 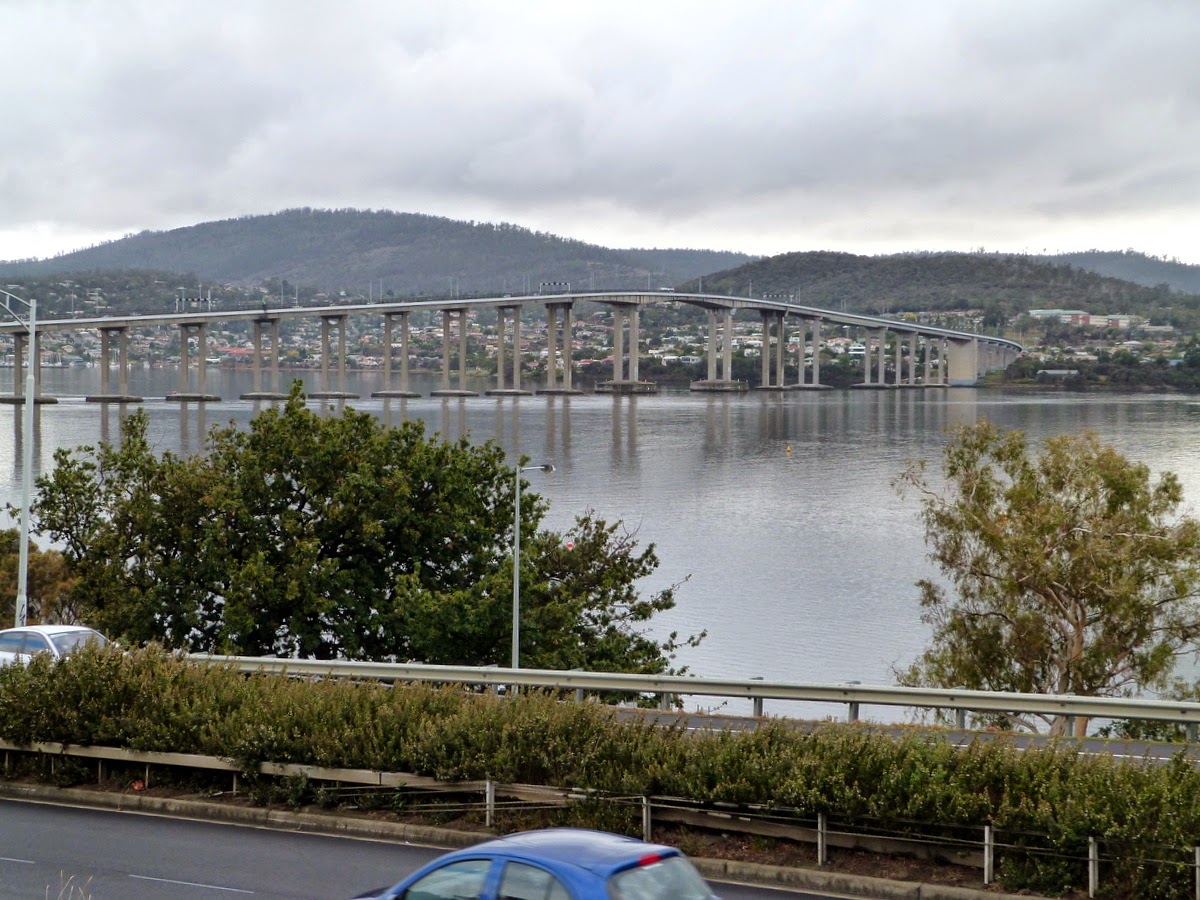 Sunday 15 February.  Having replaced the sheared bolt yesterday there were - hopefully - no worries about seat post collapse. As we were about to start, Sue discovered that one of her tyres was flat, so there was a short delay whilst husband John fixed it. We made our way back to the Tasman Bridge, along Bathurst Street and some off-road cycle paths, and this time Irene went last and walked over again. Not only is the bridge cycle 'path' narrow, it has a 3 cm wide groove along the right hand edge, which could catch a tyre and throw a rider of the bike, and there are projecting bits of structure which, if you're not paying attention, will take your shoulder off! Definitely not impressed.

We all waited on the far side in a little suburban avenue, then found our way out of town along a surprisingly hilly route which soon passed under the Tasmanian Highway before we turned left on to the Coal Valley 'Vineyard' Tourist Route. This turned out to be one of the busiest roads so far.

At Richmond there was an excellent cafe serving Devonshire Teas (TWO scones with all the trimmings). I went for buttered toast and a strawberry & custard tart plus a coffee. Time went by as we sat outside enjoying the sunshine. Everyone else had been served. I enquired about my order, and it seemed that they'd given it to someone else, so would bring another straight away. More time passed, so I went to enquire again, and they'd done the same thing by serving it to a complete stranger inside the cafe! I was beginning to suffer from paranoia, when finally it arrived. All taken in good humour of course. Grr.

Despite the number of vineyards the scenery up until now had seemed more British than on previous days, and this continued after Richmond. We passed a Go-Kart track with a race in progress, though viewing opportunities were limited. 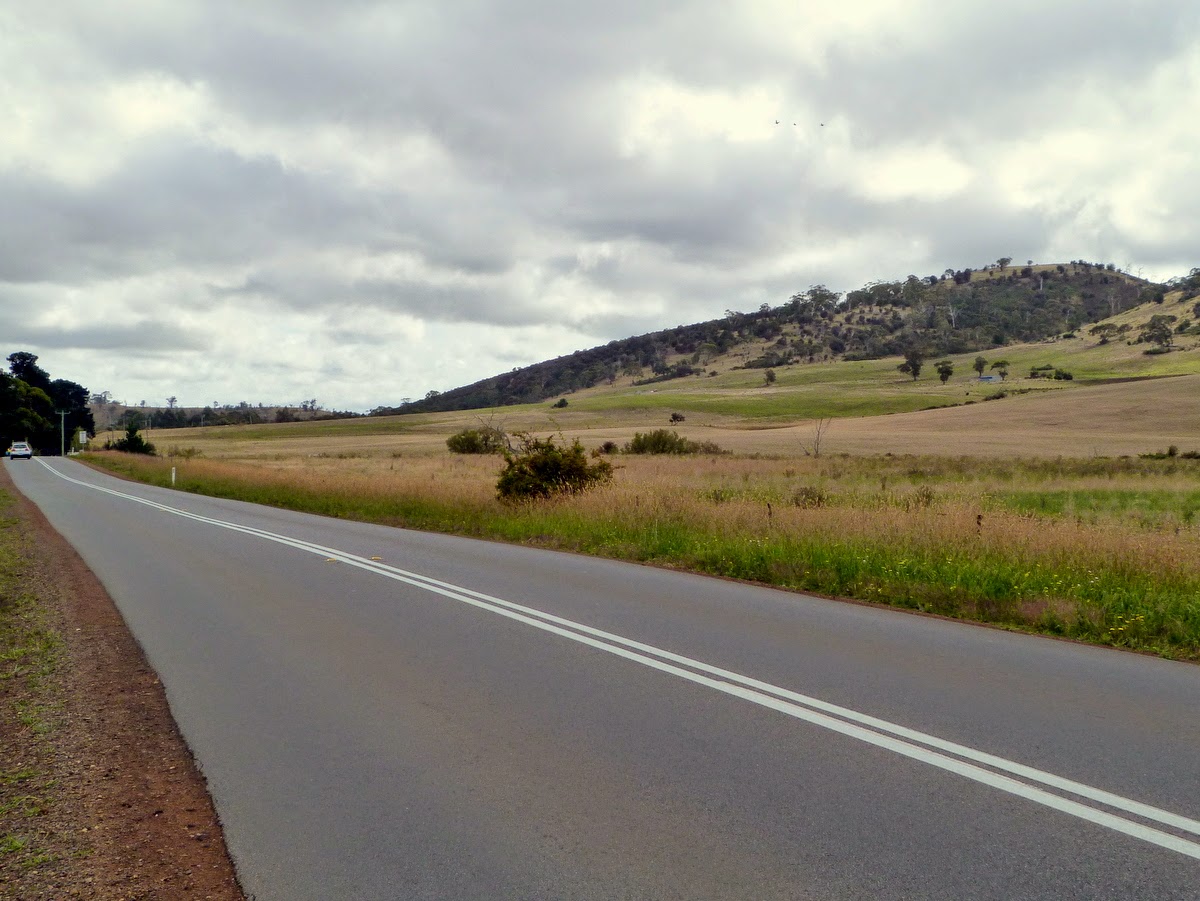 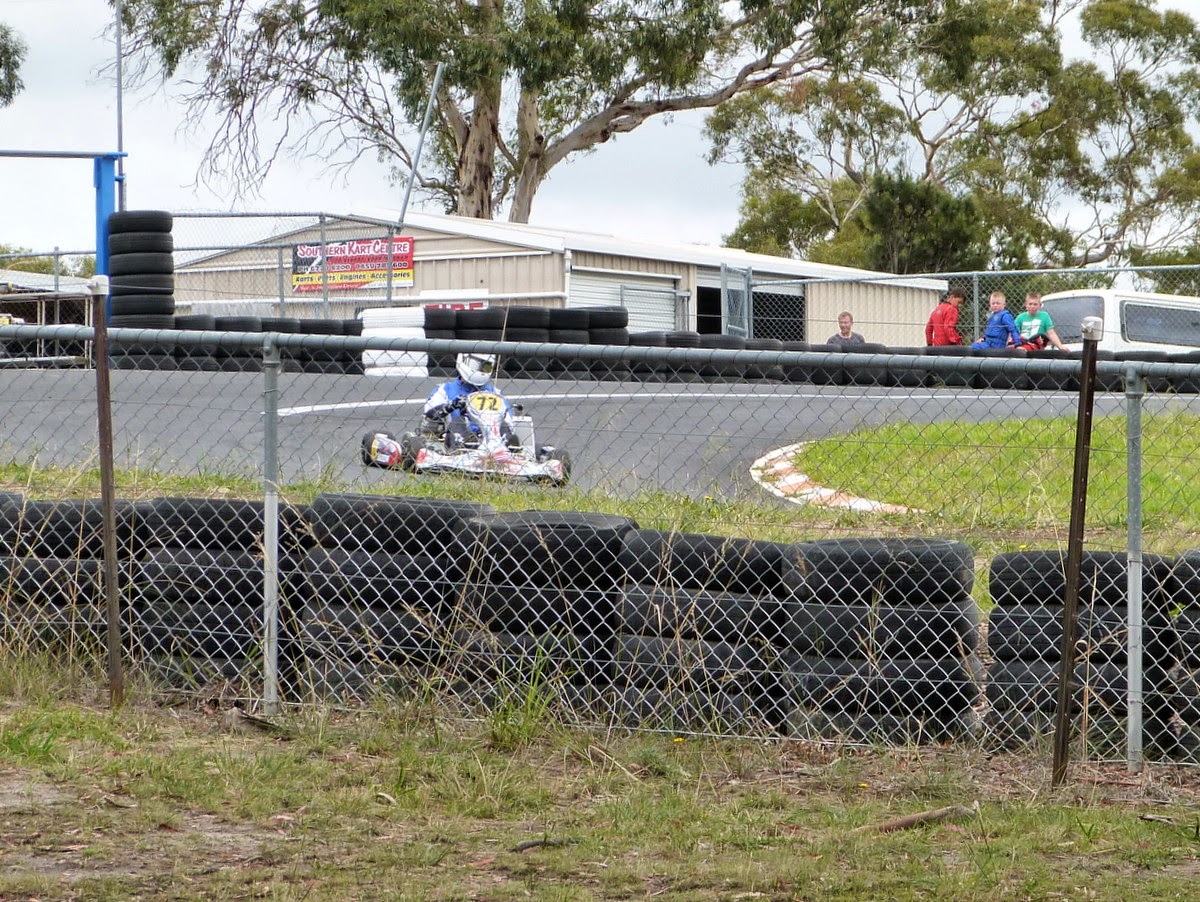 Once on the A3 I quickly turned left as per Richard's instructions on to a 4 km stretch of old road. I could see that the riders in front (including Richard!) had overlooked it and continued on the main road. I was hoping to see some wildlife on this quiet stretch, but was disappointed as there wasn't much apart from fallen trees which almost blocked the road at times.

Back on the A3 the road curved upwards in a long climb up to 315 m or so. We came across other cyclists doing the same route - almost a new experience in Tasmania. It turned out that some were on another organised tour: several were Canadian. They had a support vehicle with spare bikes, food and all their luggage, so I couldn't decide whether to feel superior or just jealous.

The climb was followed by a short descent and then a long level section into a strong headwind. Steve, who usually climbed a bit slower than me, came past at this point so I draughted him for a few miles to get a bit of a rest.

Another serious ascent followed, up to over 350 m, followed by a long, gentle descent, through Buckland (which consisted of nothing more than a filling station / cafe / store. The lady serving had a great sense of humour, ribbing me mercilessly for my pronunciation of 'mug', which she mimicked quite well.

23 km to go, some downs, some ups, but always into that grinding headwind. Really interesting scenery as we reached the River Prosser, which seemed to disappear into a deep gorge, reappear as a wide, lazy river, then there was a large weir, before we arrived at Orford, where the river was crossed by a long bridge.  Two of the other cycling group passed me as I was taking a photo, and in about 3 km I'd re-caught them and their two companions despite my burden of panniers. Suitably inspired, I went on to catch Helen and Ken before we finally arrived at Triabunna and the Tandar Motel.

The rooms were luxurious - a large double bed each and lots of space - but the bar closed at 7 pm and there were no evening meals. We found a 'take-away' where, despite its title, you could eat in, whilst others went for the local fish & chips. It seemed an incredibly sleepy place during what I would have thought was the late part of the tourist season - quite odd. When I asked the bar manager why they closed at 7 pm he replied that none of the locals visit the bar after that time. Well they wouldn't, would they, if they know that's when he closes!  All very odd.