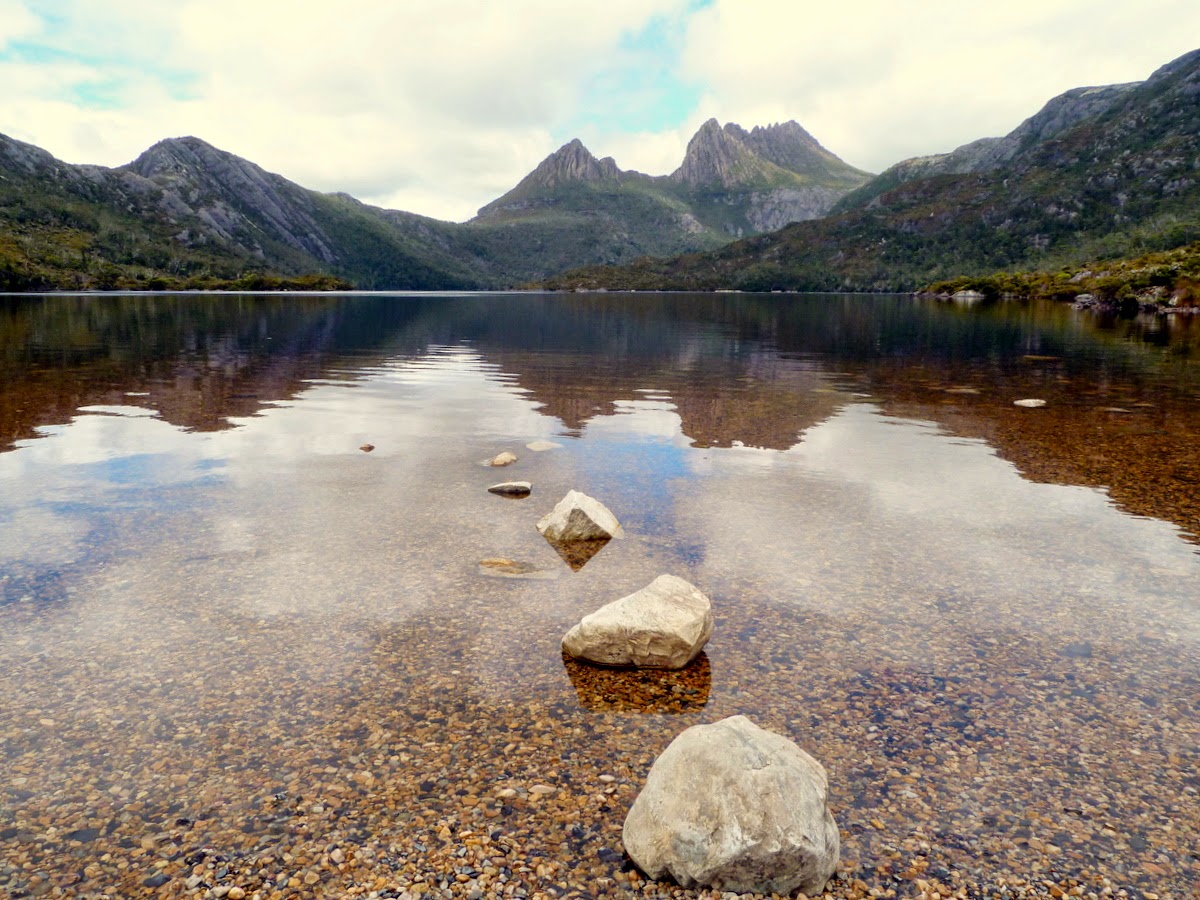 Sunday 8 February.  The motel doesn't do breakfast (not many do!) so it's a quick stroll along the road to the Bakehouse in Penguin for a coffee and a slice of pizza made, rather strangely, on a slice of ordinary bread. This and a coffee will do, I think, and I don't buy anything else to eat either, a decision I come to regret later as I underestimate the difficulty of the ride to come today.

Ken locks the door to our room and a split-second later realises that he's left his gloves behind.  But he can't get them back because the proprietor doesn't live on the premises, so has to set off without, looking a bit glum.

After a brief team photo alongside another big penguin, we get going to find that the road out of town is bloomin' steep! Lungs start to strain for the first time this week, chains drop off the inside of granny gears, whilst I try to stay detached from the chaos and pedal serenely, if slowly, up the hill into open countryside. Helen, who had been feeling under the weather, had decided to take the much shorter direct route to Sheffield, with little climbing but missing out the Wildlife Park at Gunns Plains. 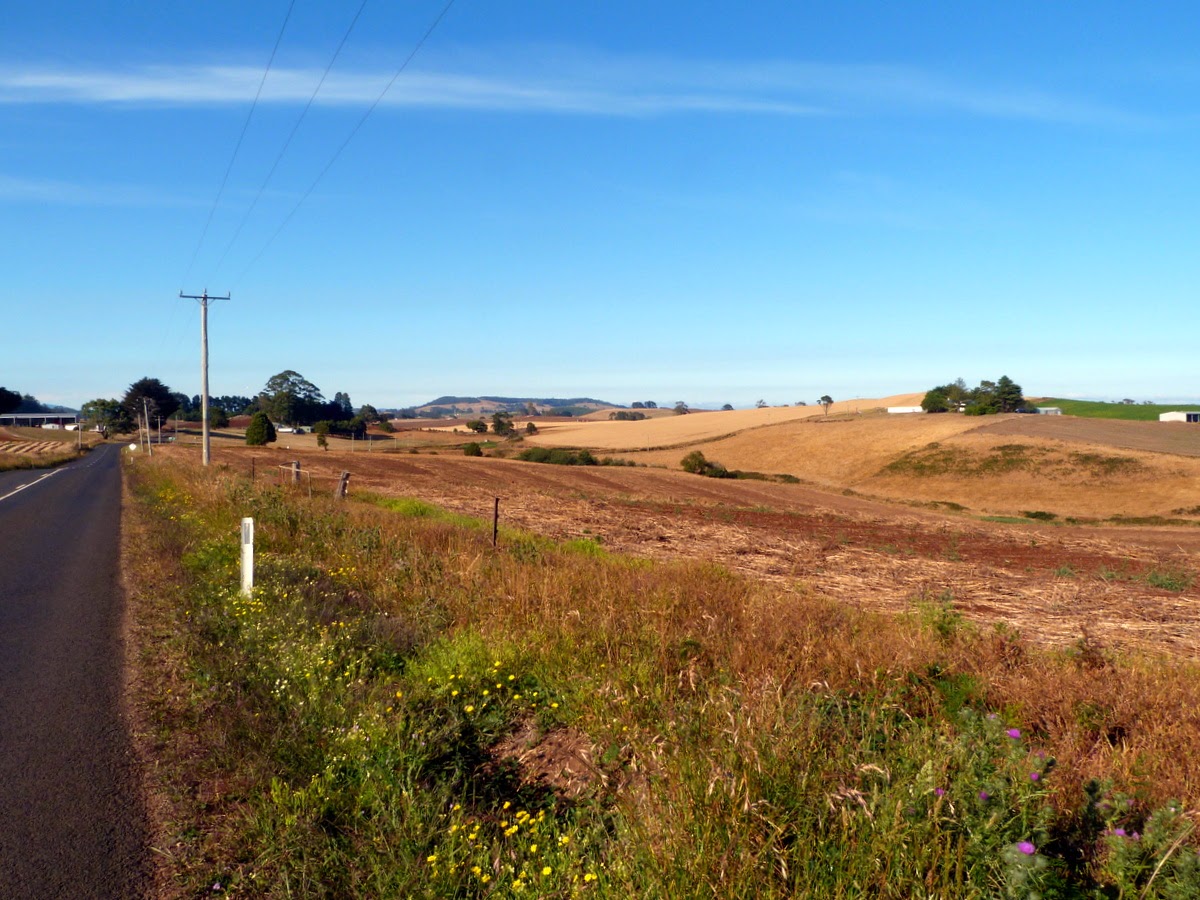 It's agricultural again, with lots of dairy cows - more than you'd see in England these days - and interesting to see that most farms have small lakes {or large ponds) all over the place, no doubt for storing  irrigation water.  Cattle Egrets, White-faced Herons, and smaller birds like Greenfinches are to be seen as we climb more gently now over the next few miles to reach 400 m above sea level and a very useful filling station / general store.

Time for a coffee and something light to eat.  Then the descent to Gunns Plains is incredibly steep and short, and I can't help thinking that it would have been a challenge in the opposite direction, to say the least!

The sky was clear and blue, and the heat was building as we arrived at Wings Wildlife Park on Gunns Plains. After a bit of banter during which I failed to get the admissions lady to let me in for a concessionary fee, I went in with the others to look at the various animals kept in open air surroundings - a Koala (very sleepy), Tasmanian Devils (very creepy), Eastern Grey Kangaroos, a Wombat, Meerkats (African, surely?), Kookaburras, Black Swans, snakes, and so on. 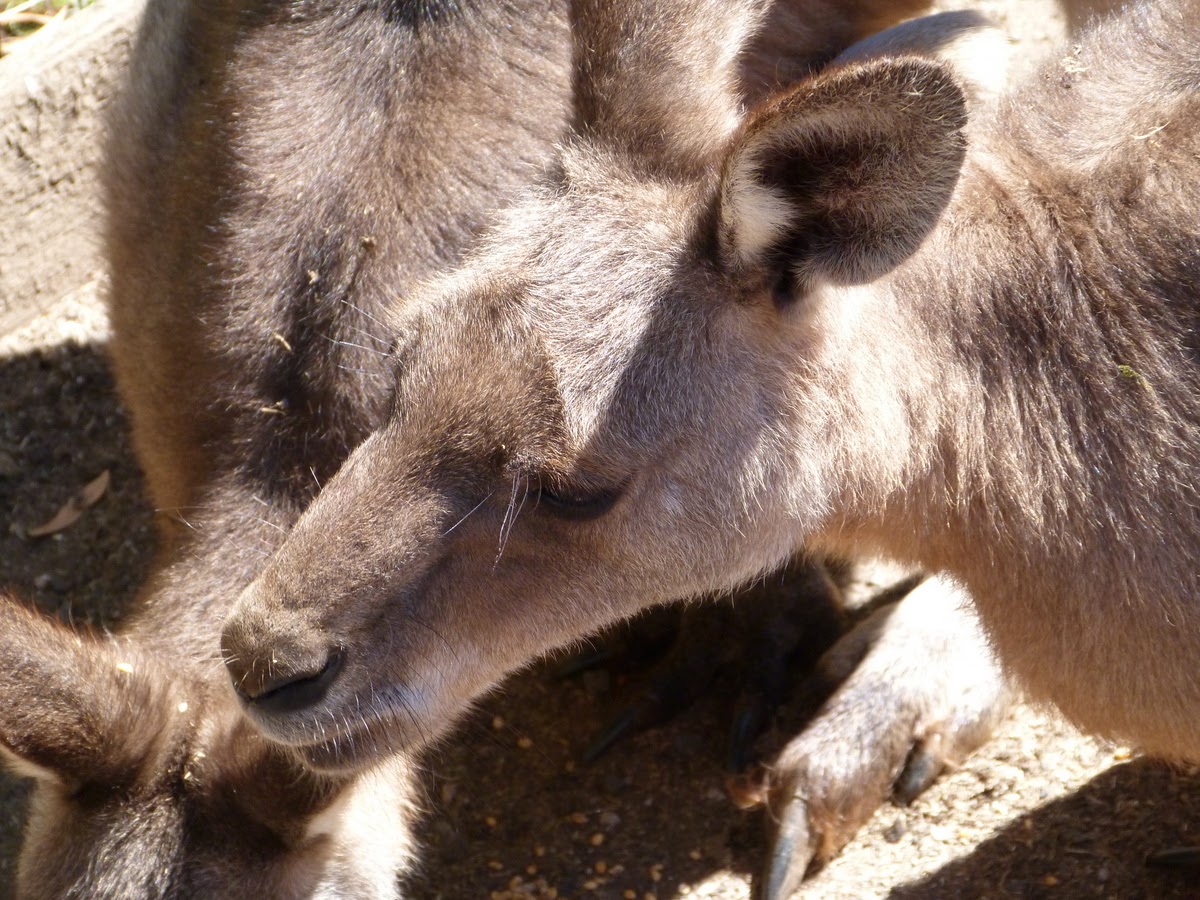 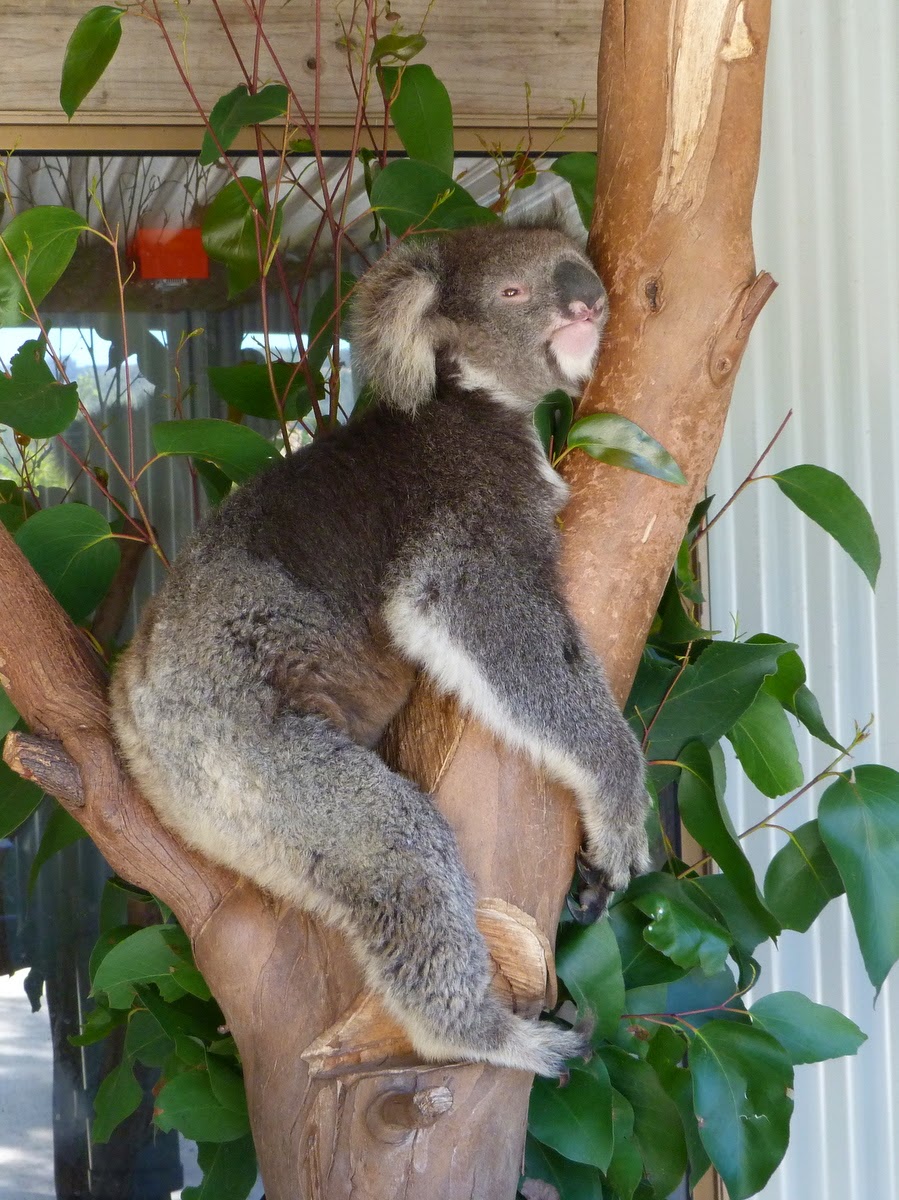 Did you know there are three species of snake native to Tasmania?  All of them poisonous, potentially fatally - the White-lipped, Lowland Copperhead and the Tiger Snake.  If you get bitten by one, you need to be given anti-venom quickly, but what if you don't know what kind of snake it was?  The answer is - it doesn't matter, because the clever people in Tasmania provide a 'three-in-one' anti-venom with serum from all three species.  What a good idea!

I had a coffee and a large slice of carrot cake, but it wasn't large enough.  If I thought the next few miles of gentle pedalling were going to be typical of the rest of the day, I was to be sadly mistaken.  After following a very pretty wooded river downstream for a while the road kicked uphill and then went up, and up, and up. It seemed never-ending, and when it did end the descent was short and sweet, before a brief easy section - past fields of opium poppies (OPIUM POPPIES?!!) and then another long, long climb.  Followed by two or three miles of gravel road.  At one point a pick-up sped by in the opposite direction, not slowing down at all and churning up clouds of dust that had me spitting pulverised road for some time! Grrrr!

There was still a long way to go and I was averaging little more than 8 mph. Nowhere was flat. Every downhill was brief and followed by a much longer uphill.  I'd run out of food - and energy, and was running low on water.  A short easy section took me to a bridge over the River Forth:  Richard caught me here and gave me an energy bar - phew!

Only 12 miles to go but... what a climb followed! A huge monster of a climb, past a dam and hydro-electric plant, up and up.  When this had finished and there were only 7 or 8 miles to go, there were still uphill gradients and now a headwind.  All I could do was look at my front fork as I pedalled away.  Eventually, after seven hours pedalling, I arrived at the motel in Sheffield, to a cheery welcome from the proprietors and a DOUGHNUT! Yummy!

I was one of the first there, and (almost to my surprise) the others eventually arrived, marvelling at Helen's wisdom in taking the short cut from Penguin.  A quick shower and laundry then across the road for a beer and crisps before joining everyone else at the evening meal.  Lots of pasta. 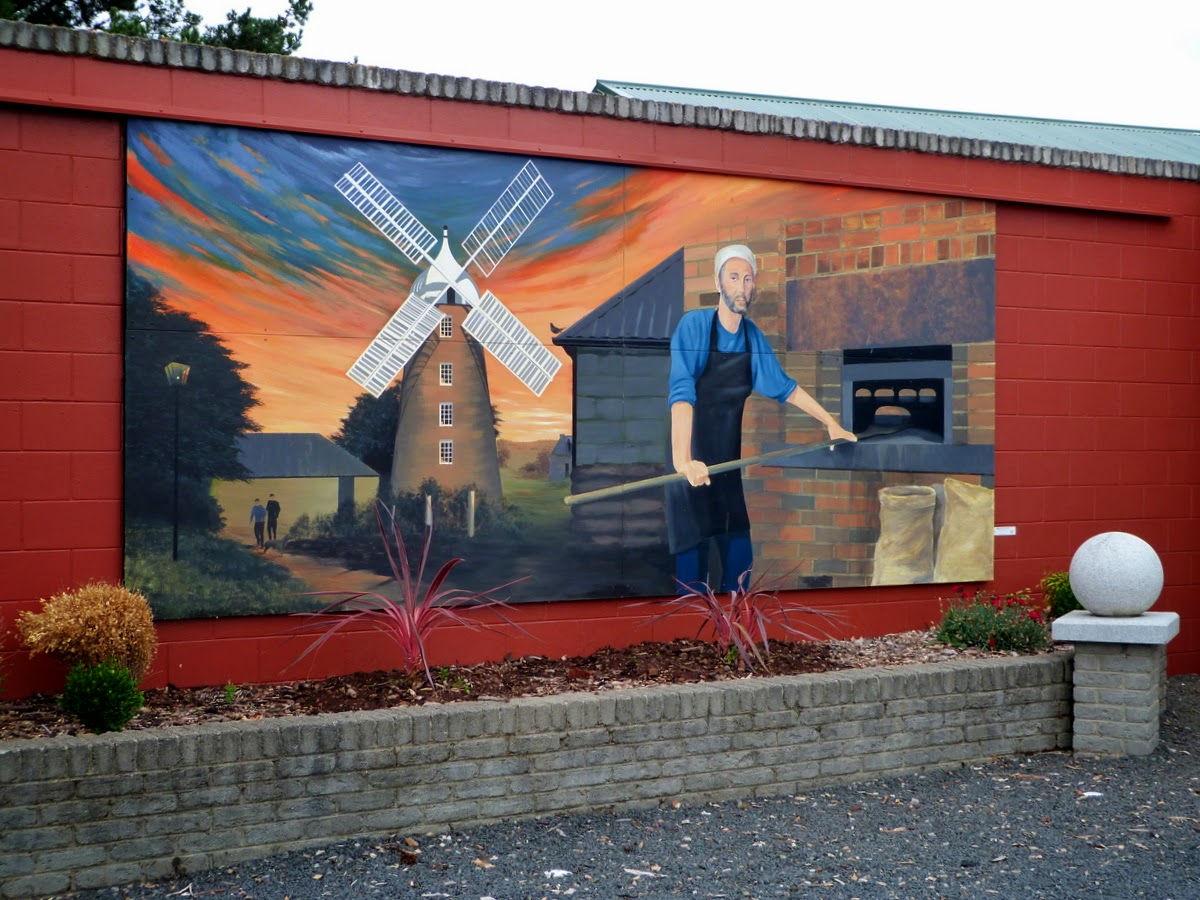 Sheffield is Tasmania's town of murals, but they would have to wait.  No cycling tomorrow as Richard has arranged a bus trip to the famous Cradle Mountain area, where we can use our walking muscles instead of cycling muscles.