Last night the effects of the storm were clear.  Crumpled awnings at the caravan site; trees and branches down everywhere; the strongest gust measured at Lochaline was 88.9 knots which I reckon is near enough 100 mph – and this is May! I know the British climate has plenty of extremes but surely this must be more extreme than most! 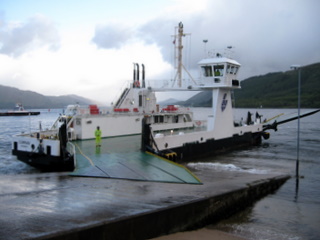 So this morning we knew what we had to do – return to the Corran Ferry (Ardgour side) and cycle to Lochaline, then catch the ferry to Fishnish on the Isle of Mull, and cycle up to Tobermory.  We were due to stay at Newdale Caravan Site just outside Tobermory but John & Helen’s parents were staying at their house in Tobermory and it was decided to park the motorhome in their drive for the night!
The weather was still pretty wild.  As we got out of the van at Corran Ferry, the heavens opened, setting the pattern for the day – again! 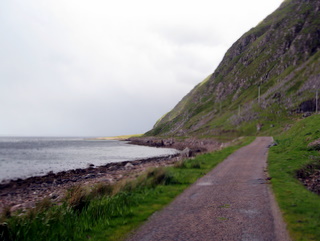 We took the little road which keeps close to the coast and passes Kingairloch before rejoining the main Lochaline road – it has some absolutely stunning scenery but today it gave us some real problems with the weather: on the first occasion I could see a squall coming across and turning the sea into spindrift. A few seconds later as it reached land, I was unable to cycle against it.  Alan got off and held on to his bike which was being blown into the air horizontally; I got off but was still blown to the ground, falling over in a heap.  At the same time hailstones were ripping into our faces – definitely an unpleasant experience.  After that, we picked up the warning signs when the squalls came towards us, dismounted and cowered down till they passed over.  Not your average cycling experience!
John and Helen had decided to wait at junction even though it meant missing the 1155 boat:  he thought we might be glad of a break, and given that over the last hour (admittedly uphill) we had only managed to do about 7½ miles, we were glad that they did.  A warming brew (the weather was freezing) and we were off for the final 12 miles to Lochaline, hit again by several numbing hailstorms.
At Lochaline we stopped at the snack bar where the proprietor gave us a donation and we had hot drinks and sandwiches.  Meanwhile John and Helen were already on Mull, having the new windscreen fitted on the jetty at Fishnish!  When we got there it was almost as good as new. 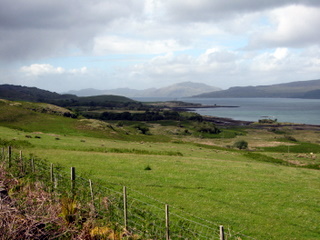 Along the Sound of Mull
The ride from Fishnish to Tobermory was about as familiar to me as any could be, as I visit Mull every year and know the roads as well as those around home.  Once at Derek and Margaret’s we had a welcome shower, a good meal, and Al was looking forward to the prospect of a proper bed as he is too big for the bed in the motorhome. Whoever decides to call them ‘6-berth’ needs a good talking to – with four people in it’s a squash: with six it would be impossible! 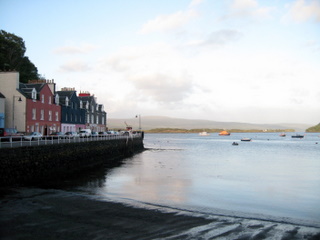 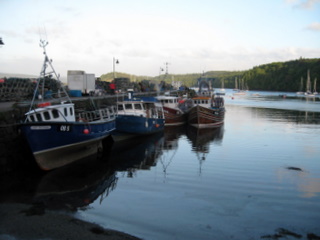 Down into Tobermory for a quick beer with glamorous grandmother Alison and husband Peter, then back for an early night as we have to catch the 0720 Tobermory – Kilchoan ferry tomorrow morning!
Today’s mileage 52 (but they took nearly six hours!!), total to date 897.  KBO as Winston Churchill used to say, KBO.
Posted by Bill Honeywell at 21:05