Kate Rusby is a fine folk singer – from Sheffield I think. Her excellent song ‘Falling’ was used by Professor Brian Cox for the closing titles of an episode of ‘Wonders of the Universe’.  Another good song from the same album is ‘Let Me Be’, but now that it’s been going around in my head for the best part of three days I’m not so sure! 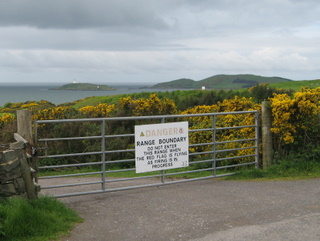 Not risking another shower this morning – I’m no great fan of full-on hypothermia – I was away from Kippford just before 8.00 and passed a couple of keen golfers on the way out of the site. They weren’t keen on swapping places. The morning looked showery and the wind was blowing hard – as always.  At first it was behind me as I skirted Dalbeattie and headed south, but after a few miles I changed direction and cycled through the military ranges on the outskirts of Kirkcudbright, complete with tank crossing.  Now not only did the wind prove a hindrance, but so did the road surface, bearing a strong resemblance to an old washboard as on so much of the route. 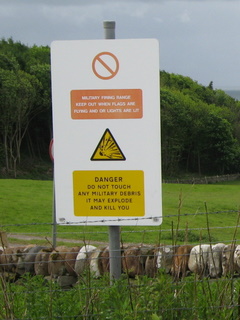 Two nice ladies in Kirkbudbright kindly invited me to their coffee morning as I cycled past, but I declined, knowing that the van was waiting on the other side of town. Just before I got there the heavens opened, and after a quick brew I got going again in the heavy shower.  A maze of roads eventually led to the Gatehouse of Fleet by-pass, and to my horror I saw it was another 17 miles to the lunch stop at Newton Stewart – all of it into the teeth of the headwind which was getting stronger – and all on the A75 which, being the main link from the M6 to Stranraer, is in no way a quiet by-way! 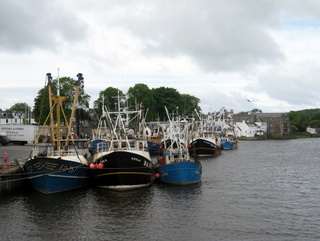 Kirkcudbright
Mercifully Val and Alan had also decided that it was a long long way to Newton Stewart and parked up 7 miles south, so I could get a calorie boost without waiting too long. Ian Hardy sent me a text to say that he had Fleetmaster in street mode and was enjoying a great view of the layby we were in. 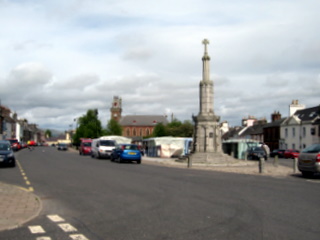 After another 7 miles of juggernauts and teeth-gritting headwind I finally turned south at Newton Stewart and enjoyed a good few miles with the wind behind me.  An off-road cycle path looked inviting, then came to an abrupt end within half a mile, complete with 1-in-3 climb back to the road! Wigtown has a very wide main street and lots of bookshops – I think it’s trying to be Scotland’s equivalent of Hay-on-Wye.  The next town is Bladnoch, and I can’t help thinking that it would be nice if it was the inspiration for the Goons’ when they named Captain Bloodnock… 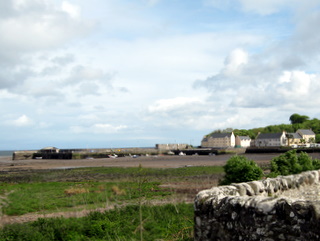 Another ten miles or so of tailwind followed, down to Garlieston (where the first Mulberry Harbour was trialled in 1943) and Isle of Whithorn, but then I had to turn west for the final 8 miles – nearly all of it uphill and all of it into the strongest wind of the day so far.  By the time I arrived at the very tidy caravan site at Knock School, Monreith, I was pretty powfagged and also nearly deaf from 40 minutes of howling wind in my ears! 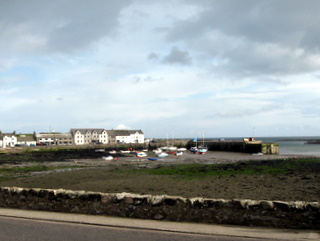 Isle of Whithorn
82 miles today, making 431 in total for the first five days. Another five days before I get a break, if I can keep going – leg muscles keep getting more tired and my old sit-bones are grumbling, but otherwise I think I’m still OK…
Posted by Bill Honeywell at 18:31