I was cycling along this morning – well, that’s possibly misleading, as I was heading into a Force ∞ wind trying my best to go forwards rather than backwards – and that Jack Nicholson film came to mind. As Good As It Gets – a good film – and I thought: “I can think of a good name for the sequel, based on my cycling adventures – ‘As Bad As It Gets’” 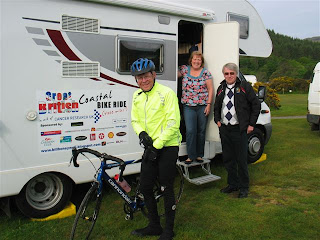 It took over an hour and a half to cover the 14 miles to Campbeltown from Carradale Bay, the excellent site where we had spent the night.  Johnny Durnan, the guy who runs the Carradale Goat newsy website, had arrived to take some photos and then I set off, straight into a 1-in-7 hill out of the village, followed by a similar descent, followed by another 1-in-7 ascent, followed by… well, you get the picture: 14 miles that made Blackpool’s Big One look a bit effeminate. 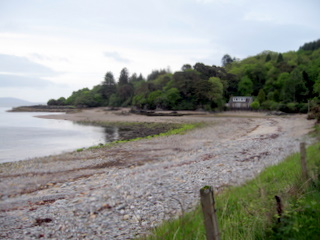 I stopped for a brew at the van.  Ardent Fleetsmart watchers will have noticed that I took longer than normal. This was due to (a) not wanting to go back out again and (b) putting on more clothes while another heavy shower passed over.  Not only was it wet and windy, it was absolutely freezing cold!
My intended route after Campbeltown was a clockwise circuit which included a coastal exit from the town and then a cross-country hilly section. Logistics Manager Alan suggested doing this anti-clockwise instead, hopefully to minimise the effect of the wind. So from Campbeltown I took the inland route to Southend where I was glad to stop for an early lunch. And still only 28 miles on the clock! 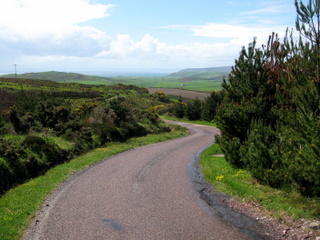 There then followed one about the most arduous 15 miles I’ve ever done!  Unlike the morning’s section, this consisted of long, long, steep climbs followed by descents to sea-level and then the same again. And again. I nearly got off on one particularly steep climb. At first the rain was really heavy, then for a short interlude of thirty minutes the sun came out and it seemed quite nice.  Buzzards were sitting on telegraph polesm and House Martins were nesting on the odd isolated bungalow (and I mean isolated! Some people must like to live a long way from anywhere). 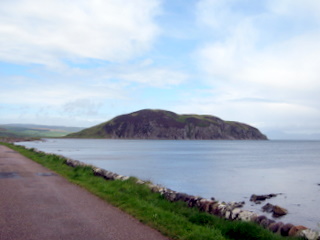 Then the wind came around and I was struggling to make 10 mph downhill  The last mile into Campbeltown was purgatory. 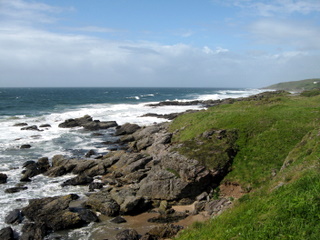 After another pit-stop there were just 14 miles left to Muasdale, our stop for the night on the A83 west-coast route.  The first four miles into the wind towards the coast were slow, but once by the sea the route turned north and the wind, whilst not behind, was off my shoulder and not slowing me down. 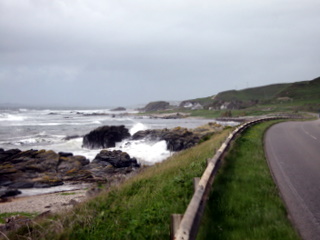 This is a gorgeous piece of coastline.  A final climb and descent brought me to Alison Clements’s Holiday Park at Muasdale after 53 hard miles with about 7,500 ft of ascent – that’s more per mile than the Fred Witton Challenge – the cycle sportive that does all the Lake District passes including Hardknott, Wrynose, Honister and Kirkstone passes – although, granted, I only did half the distance.  Won’t need any rockin’ to get to sleep tonight. 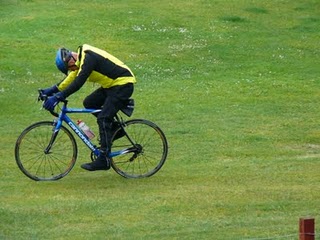 (This last photo courtesy of Alison's Muasdale blog at http://muasdalereports.blogspot.com/
Tomorrow the van abandons me first thing. Alan needs to get home for a suit fitting for son Chris’s wedding on Saturday.  I have to do the 75 miles or so to Oban unsupported, where John Lloyd will give me a bed for the night before I catch the 0811 train to Glasgow, Carlisle and Skipton. Wedding Saturday, travel back to Oban with van and new crew Sunday, restart Monday.  I’ll have to carry a little rucksack with spare clothes and toothbrush tomorrow. Let’s just hope the weather is kinder.
Posted by Bill Honeywell at 20:34