Day 6 – Monreith to somewhere near Stranraer

Really nice little caravan site last night – Knock School, near the coast on Luce Bay – the wind was blowing and the only TV signal we could get was German, so Alan put the picture on, and got the sound, including Ken Bruce, from the van radio.  I went to bed.
As soon as we got up this morning, it started to rain.  Normally, when you’re thinking of doing a bike ride and the weather looks bad, you start to wonder “Should I, shouldn’t I?” – but on a ride like this, the decision is taken out of your hands, which in some ways makes it easier. You just go. 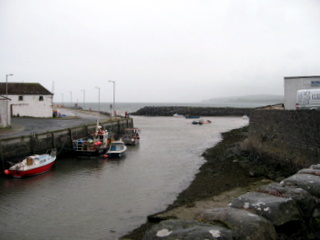 Heading west, into the wind (what else?) I followed the beautiful coastline through Port William, then round narrow lanes before reaching the A75 for a short while.  Then it was on to the Galloway peninsula and head south past more military ranges, then Ardwell and Drummore until finally, with 40 miles on the clock, the long gentle drag up, down, and then up again to the Mull of Galloway, the most southerly point in Scotland, where there is a lighthouse, visitor centre and coffee shop. 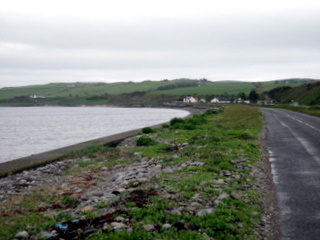 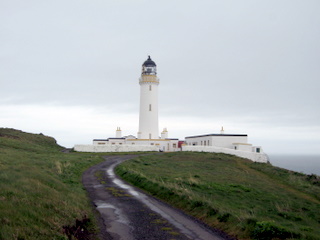 Nice views.  The rain stopped. Were things looking up?  On the way back I was taken by surprise when out of the corner of my eye I saw a vole running alongside me, and then within 20 yards a weasel ran across the road in front.  Whilst talking about the wildlife, all along this coast there are Sedge Warblers, Whitethroats, Linnets and Yellowhammers singing away, whilst the Pink Campion and Bluebells along the verges look very springlike. 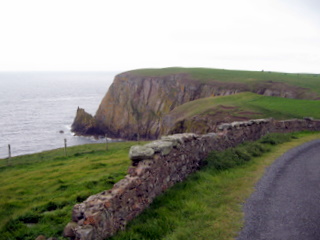 Back through Port Logan to lunch in a picnic area near Ardwell, then off again, and what hard work!  A combination of tired legs (and everything else!) ups and downs (mainly ups!) and really rough road surfaces meant that I felt I was going quickly once I got above 10 mph!  The trouble is, after five or six longish days in the saddle, the old legs don’t have the same energy as they did on Day One – I just hope there isn’t too much further degeneration before I finish! 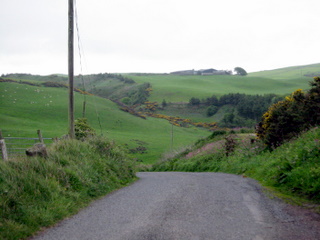 Just north of Portpatrick I crossed the route of the Southern Upland Way then carried on through more undulating green countryside. Oh, by the way, the rain had started again by now – in fact for much of the way there was a thick sea-fret coming in from the west – but I kept delaying putting on waterproofs until by the time I got to the finish I was pretty wet! 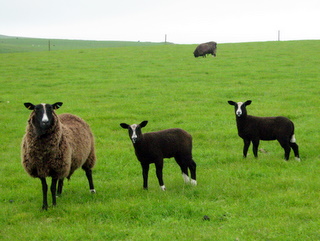 74 miles, and the hilliest day so far, making a total of 505 miles in 6 days. 85 miles scheduled for tomorrow, finishing at Saltcoats.
Posted by Bill Honeywell at 21:48