This morning I was joined by Brenda Waugh from Annan Rotary Club who arrived at our camp site 7.45: the sky was looking dark and Brenda reported heavy rain at Carlisle, so I got the winter bike out and donned suitable waterproofs. Soon we were off around the peninsula that leads to Bowness-on-Solway where Hadrian’s Wall starts and finishes. Soon after we came across a group of twitchers, with telescopes trained on the estuary mud, so we stopped and had a look at the object of their excitement – a Broad-billed Sandpiper, blown off-course from its usual route to Siberia. Never had a birding first whilst on a bike ride before!

We had our first deluge around now, then made our way through Carlisle, then got held up at a level crossing whilst we waited for FOUR trains. Along the side of the M6 and then we were at Gretna and in Scotland – woo hoo! I think I’m going to be in Scotland for a long time…. 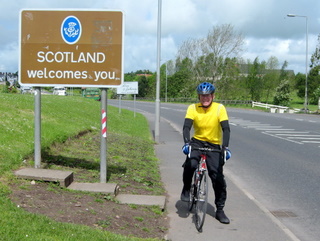 At Gretna we turned west and into the teeth of another headwind. The nine miles to Annan were hard work, and here we stopped at the van for lunch in the salubrious location of… the Tesco car park. Brenda and her vice-president Joyce presented me with a cheque for £100 for Cancer Research UK, and then we parted company as Brenda got a train back to Carlisle and then on to retrieve her car. 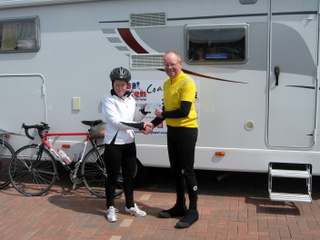 The afternoon brightened but the wind was just as bad as I continued west, through Ruthwell – where the first ever savings bank was set up and is now a museum. So that’s where all the trouble started. I didn’t have time to go in. 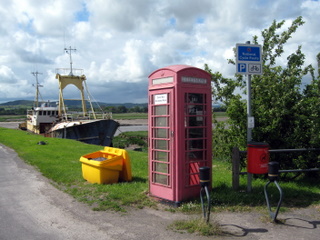 Through Dumfries, another quick brew, then on to New Abbey (looking at the state of the ruins I wouldn’t like to think what condition the Old Abbey must be in) and round the coastal route out to Southerness, where the pack of hounds was being exercised. 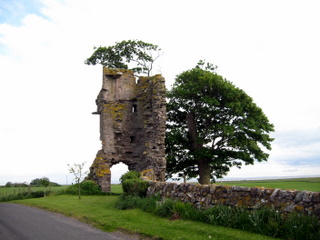 Time was going on, as the headwinds had slowed progress down a lot, but the last eight miles were torture – an up and down switchback on worn out tarmac that shook the bike to bits and made me wonder whether I’d have any fillings left at the end. Finally I arrived at the caravan site at Kippford to have the coldest shower experience ever. Don’t get me wrong – the water came out of the shower warm, but the shower block was so cold that by the time it reached my shoulders it was at about 20C and at my feet it was minus 10!

Massive pasta meal for tea, followed by a look at tomorrow’s route – nearly as long as today. Phew! I hope I can keep going till I get to Oban…
Posted by Bill Honeywell at 21:40