Somewhere East of Applecross to Kinlochewe. 49 miles.
When planning the route initially I factored in a day off once or twice a week, but then decided I might get totally bored, so instead I planned two consecutive short days in their place.  Today was due to be the first one, followed by another tomorrow…
After what I said on yesterday’s blog, and after an evening of torrential rain in Applecross, on the western coast of Scotland, we awoke to light winds and NO rain (!!!)  So, not relishing the prospect of being beaten, we decided to go back up to the top and have a look… where we found that conditions had somewhat improved, and so the decision was made to cycle down the other side to where we had abandoned yesterday, and restart from there.  What a view!  It’s an awesome-looking road, and what a great feeling to get to the top this time.  Job done. 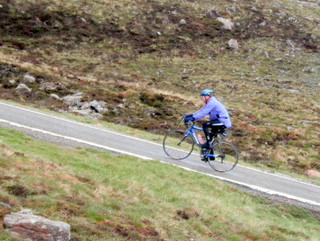 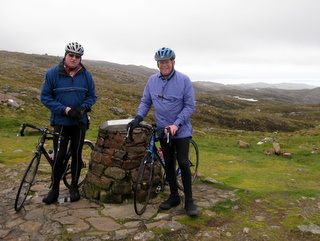 After a fast descent we had a look at the village of Applecross (it was too wet last night). There is a community filling station here where you can pay by card and support the village finances presumably.  As the weather seemed to be improving I tried to take off my waterproof top but only managed a wardrobe malfunction, as I’d forgotten to take off my big gloves first! 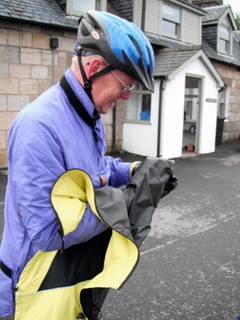 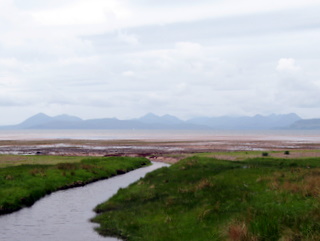 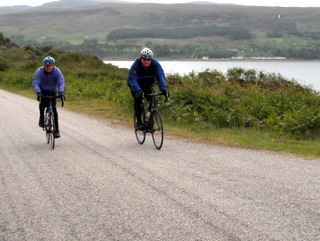 The next hour and a half was delightful, as we travelled north with a following breeze around the Applecross peninsula, with Skye and Raasay on our left. A dustbin wagon passed in the opposite direction – I asked how far they had to go to empty the wagon and got the answer “Gairloch – and we can pick you up on the way back!” – I replied “Well that would be fine, we’re rubbish!” 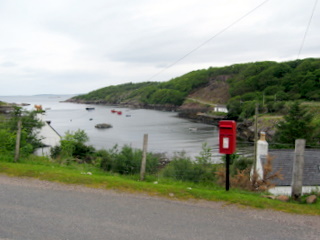 From Kenmore to Shieldaig on Upper Loch Torridon, the road undulated constantly, making the going hard work.  There was a Black-throated Diver out on the loch, close enough to see quite well.  It was beginning to rain now, not surprisingly as it had been dry for over two hours.  The big mountains of Torridon looked impressive enough, and would have been better without the veils of clouds across their summits.  I thought it was a bit ironic that the old Torridonian Red Sandstone was formed in desert conditions – if only!  Liathach, Beinn Alligin, Beinn Eighe, An Teallach – all names to strike awe into part-time Munro-baggers like me.  This was the first time I’d seen them, and I wouldn’t have fancied climbing them this week! 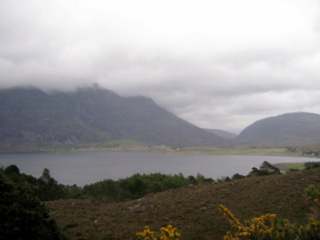 We thought there might be a climb on the last ten-mile section but instead, Glen Torridon is remarkably flat, with the gentlest of rises for five miles followed by another gently descent to Kinlochewe, where we finished the day at the Caravan Club Site.  It has a great shower block – heated, with quality shower – pure luxury.  Though on a more mundane level it seems that it was my job to empty the chemical toilet: I hope this isn’t setting too much of a precedent!
No signal for the wi-fi once again, but Al has been to the pub and reckons we might be able to use theirs, so if you are reading this and it’s Friday, you’ll know he succeeded.  Off to Gruinard Bay tomorrow and let’s hope this record-breaking weather decides to behave for once!
Please don’t forget that I’m doing all this – and damn it all, this week I seem to have been getting into a few scrapes as well - to raise £20,000 for Cancer Research UK. So far the total stands at over £5,000, but like the mileage, there’s a long way to go.  So PLEASE visit either the CRUK web site or the Just Giving site via the links on this blog, and MAKE A DONATION to help in the fight against cancer.  Whatever you can afford will be most welcome – thank you!
Posted by Bill Honeywell at 20:43