Thursday 19 February.  I didn't mind the fact that my single bedroom last night was tiny, but the lack of opening windows made it difficult to get clothes dry. I think I decided to put on my spare pair of shorts for the first time, so I could 'peg' the damp ones on to the rear bike bag to get them dry.  Breakfast was a bit on the scant side, so when I set off I went looking for a bakery. When I drew a blank I called in at a cafe where the owner was happy to sell me a couple of bread rolls, a banana and a choccy bar.

On the edge of town is the strange-looking building which houses the Forest Eco Centre. As someone once said, it looks like the Martians have crash-landed their spaceship in the paddock, and if I'd known more about it I'd have stopped to look around, except that we were too early and it wasn't open. There's an information centre about Tasmania's wood and woodlands. Now the road undulated steeply through pastoral scenery with lots of glacial erratics (boulders left behind after the last ice-age) and a pretty carving on a massive tree stump.

The day's big climb started after about seven miles - over 400 m to the top of Myrtle Bank, and despite being reunited with those heavy panniers I climbed quite well, passing a few colleagues on the way up and almost (but not quite) keeping up with Irene. 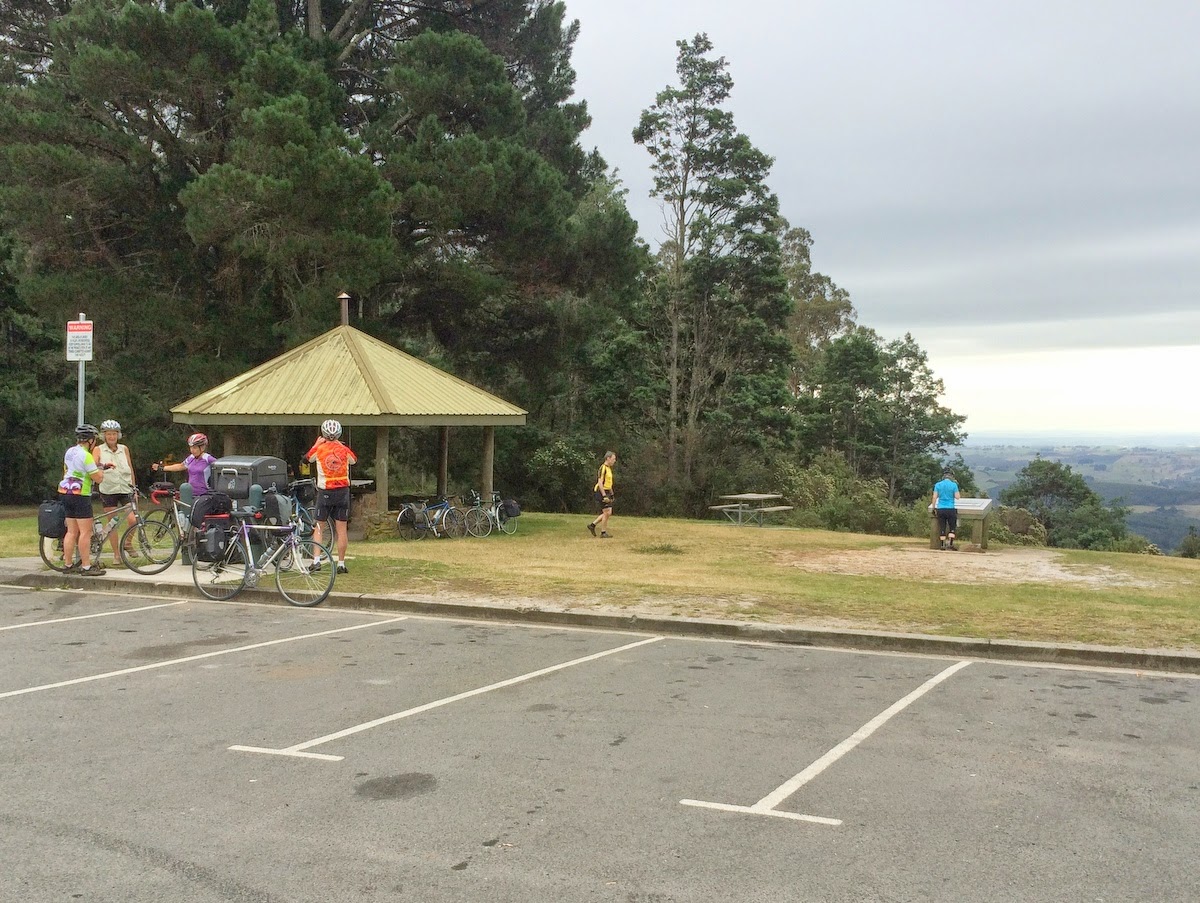 Near the top was an excellent lookout with great views of the NE corner of the island, plus very distant views of Cape Barren and Flinders Islands. After a strangely undulating top (the hill didn't seem to want to give up!) we eventually dropped, gradually, through woodland and surroundings with an almost moor-like quality, until we saw the Myrtle Campsite, and although no-one else had stopped, five of us (me, John, Sue, Steve, Irene) called in for a machine-made cuppa and a quick break, noticing how cheap overnight stays were (about $6 per night for a camper or caravan).

Sue spotted an Echidna by the roadside soon after. I hung on for several minutes hoping it would spring into life, but without luck as it stubbornly buried its snout in the ground and, apart from the odd bad-tempered shuffle, showed little signs of activity. When I set off again I was, as usual, a long way behind everyone. 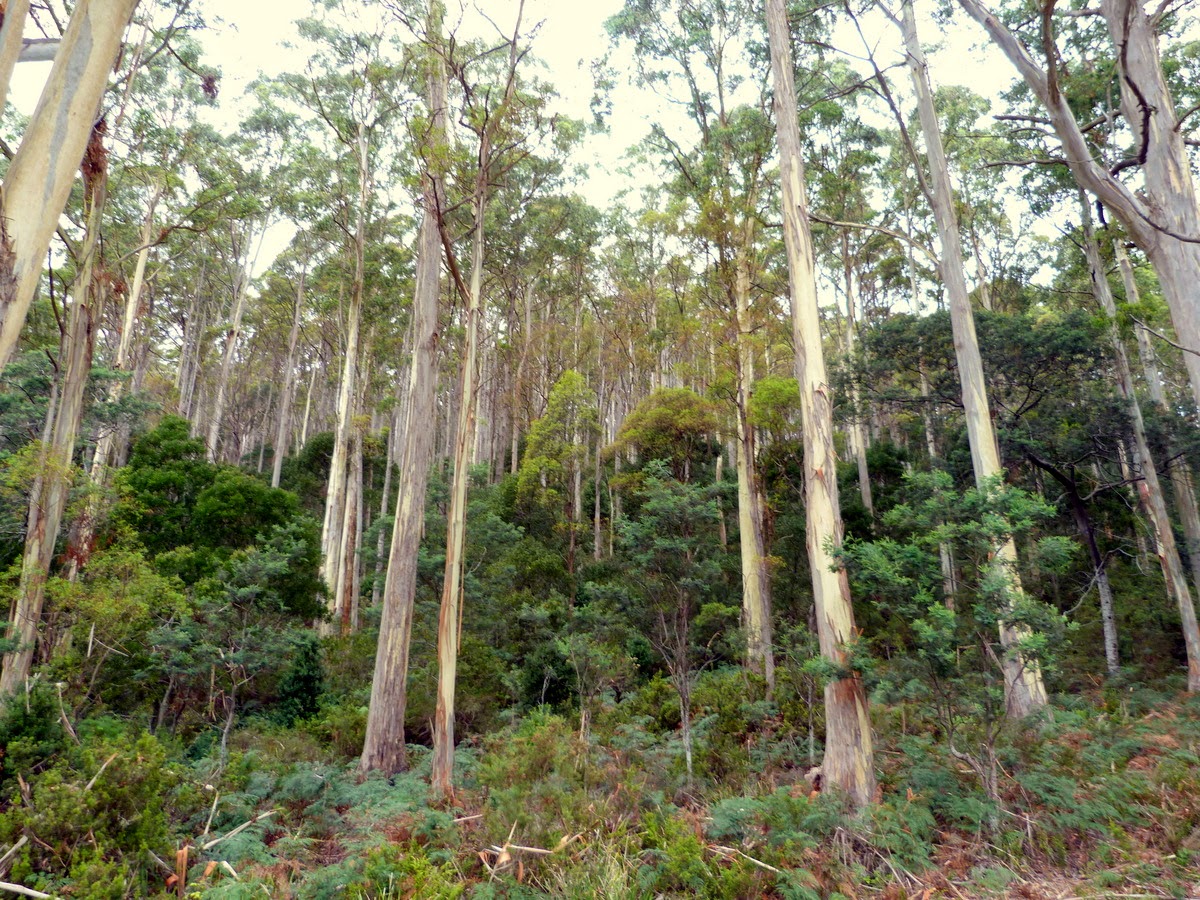 But the countryside was really pleasant here, with a mixture of fields, forests and streams - a joy to cycle through. By the time I reached the next cafe stop, everyone had been and gone, but I wasn't bothered and simply carried on until I reached Launceston, Tasmania's second-largest city. Having navigated my way through the centre, I found the Penny Royal Hotel Apartments, and it being only 1 pm, was too early to check in.

I went looking for the rest of the party and found Tony and Deborah at a nearby cafe, bought a coffee and - as we were sitting outside - polished off my second bread roll and the banana (you've got to admit, I know how to live!) Back at the hotel the rooms weren't quite ready, and now everyone else arrived so we went across the road to a swanky restaurant bar on the water's edge and had... a beer! It was now very warm and the cold beer was perfect.

Back to the hotel, checked in (excellent rooms, lots of character in a rare old building) then off for a wander around town where I bought three new inner tubes from the local MTB bike shop, and learnt the new Australian word for 'cool' which is 'prime', pronounced 'proym'. And a huge ice-cream, which was proym.

The only niggle was the evening meal, just across the road, where over an hour passed between us ordering the food and it arriving on the table. Steve and Irene's main course arrived, to be followed some 15 minutes later by the chips they'd ordered with it, and it's fair to say that Steve was not best pleased. Nor did he appreciate the waiter's reply that 'Well, we've only got a small kitchen.' Surely they knew that when they took the order..?

Never mind, overall an enjoyable day, pretty easy going and full of variety. Tomorrow we stay in Launceston to enjoy the sights before our last decent cycling day, returning to Devonport where we set off two weeks ago.