Day 9 - Hamilton to Hobart: Our leader has a very important birthday

Frday 13 February.  Tour leader Richard Dugdale is 70 years young today. We gave him a card at breakfast and sang that dreadful song. I probably managed to say "You don't look 70...  but you must have done once" though I can't remember for sure. No, I must have done - I always do!

When we arrived yesterday afternoon I left my bike at the front of the hotel while I carried my bags inside. When I went to move it later, it had disappeared. I assumed that some kind person had taken it around to the implement shed where they were all being stored overnight, but of course now I got that nagging doubt. Had someone actually stolen it? This is of course a ridiculous thought, as who would want to ride a bike up and down all these hills? And sure enough, the bike was in the implement shed, though I never found out who the kind person was that put it there. 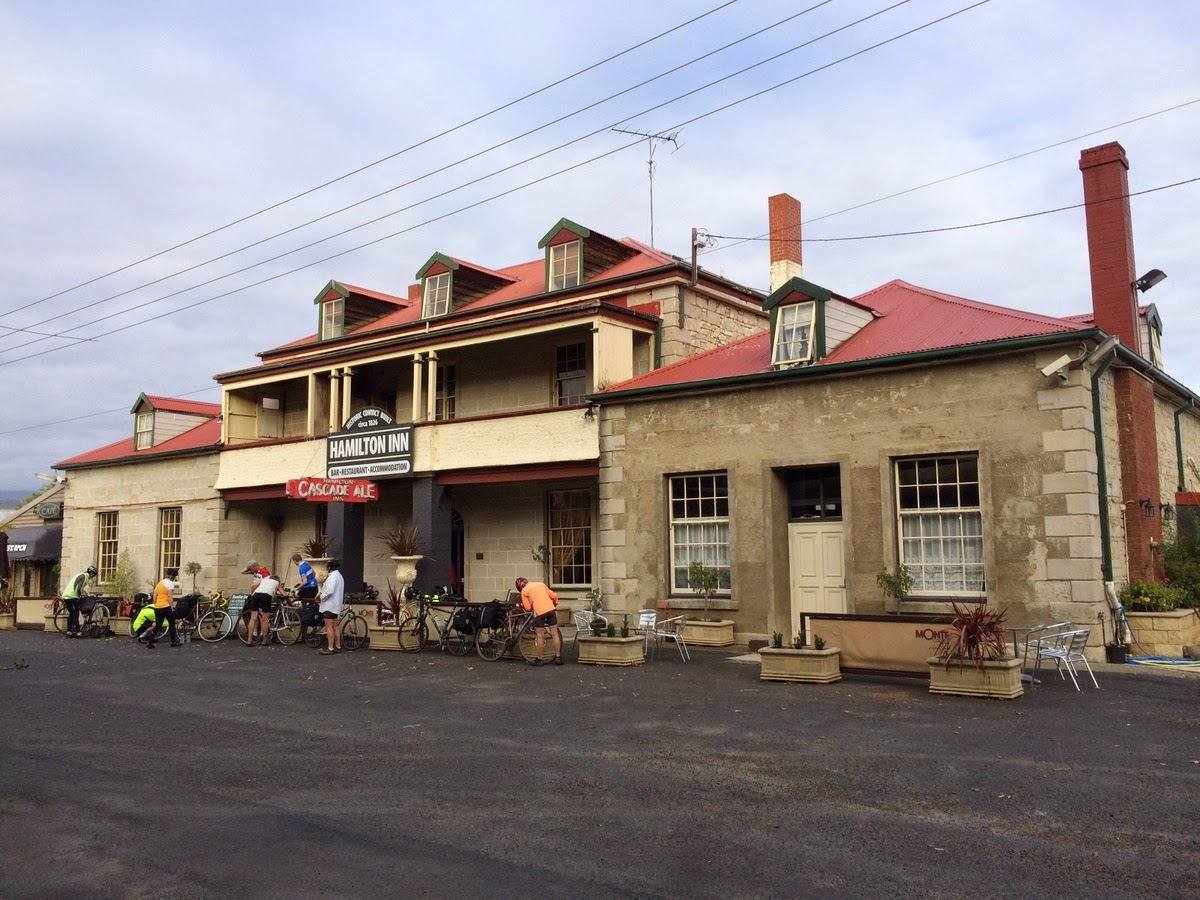 We loaded up and set off after a  mammoth photoshoot (no idea why!). The long hill didn't seem as bad as we'd expected and was soon over, to be followed by rolling green countryside. I went from lead bike at the top of the hill (which may surprise those of you who know how slow I usually am up hills) to rear-gunner again after stopping to take photos of Eastern Rosellas and two White-faced Herons. Whilst stopped I looked down at my feet to see a 12mm combination spanner on the ground, so I put it in my little tool bag! 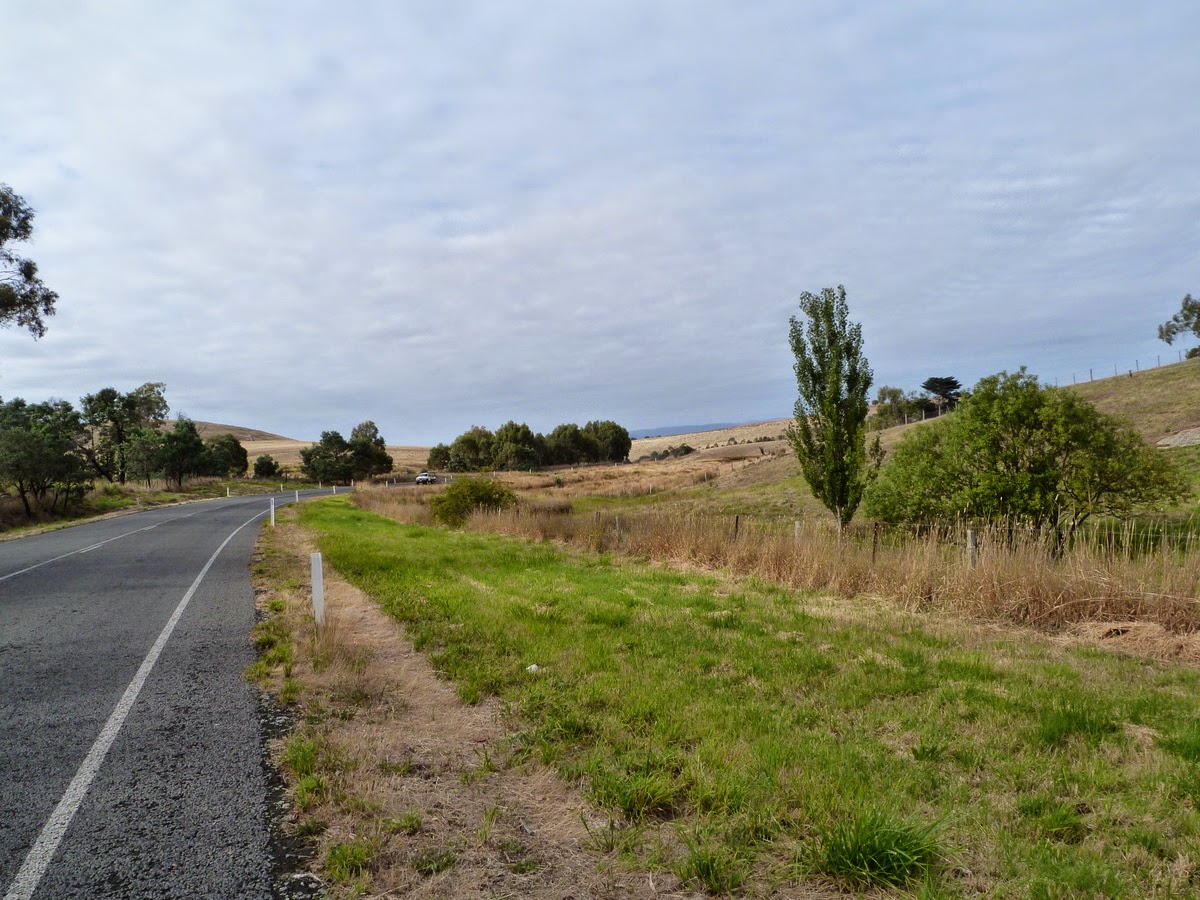 A large tanker with trailer passed very close on a downhill section at an alarming speed, forcing an oncoming car off the road on to the gravel, then continued to pass the cyclists in front without any apparent care for their safety. He did blow his horn a lot, so I guess that made it alright. For an idiot.

We passed through Gretna (and the Gretna Green Hotel) then turned right on to a much quieter road following the River Derwent, initially quite high above a steep-sided valley but quickly descending to cross the river and run through fields of hops, towards Bushey Park and Uxbridge, all very pleasant. Did you know that the closest relative of the hop plant is the cannabis plant? Remember that when you're quaffing your next pint of best bitter. We also crossed the strangely-named Styx River. I waited a while for the ferryman but he didn't show... 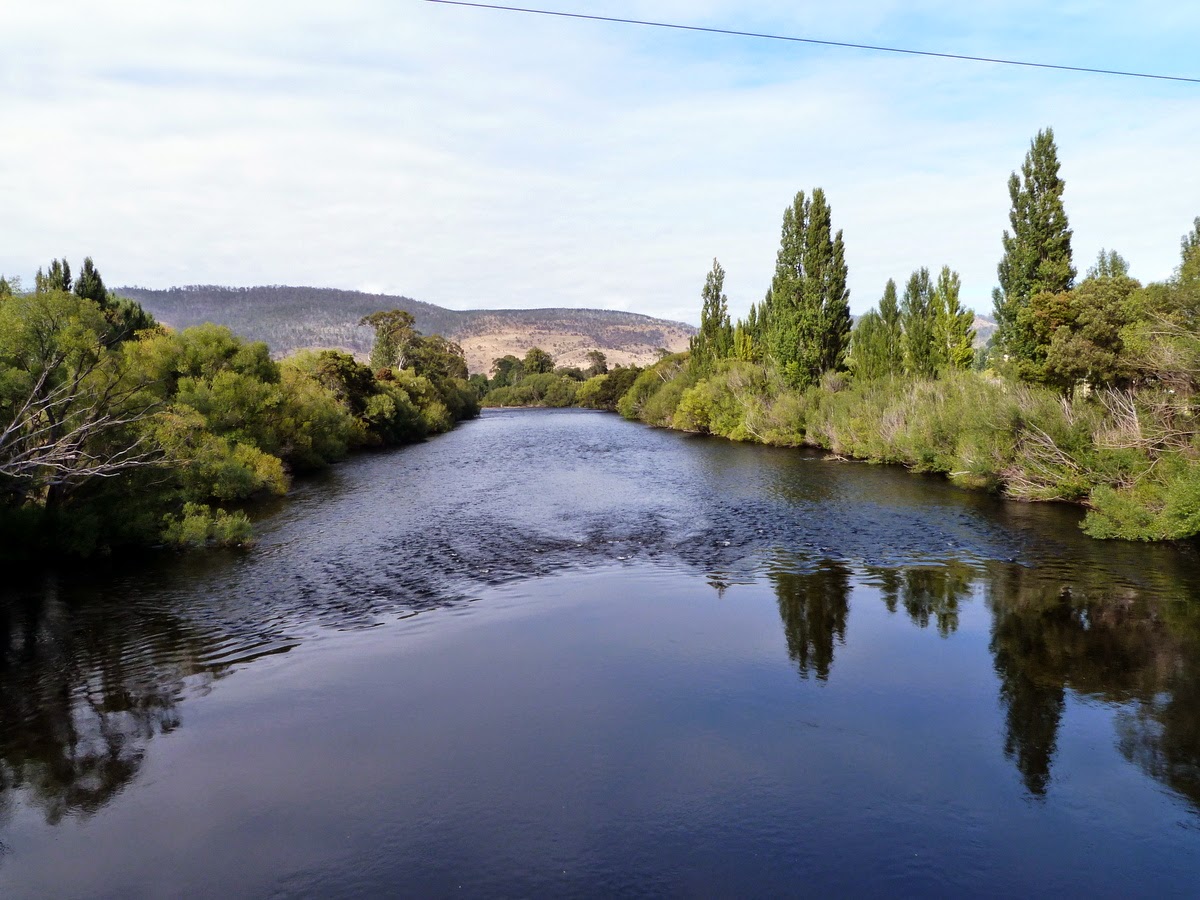 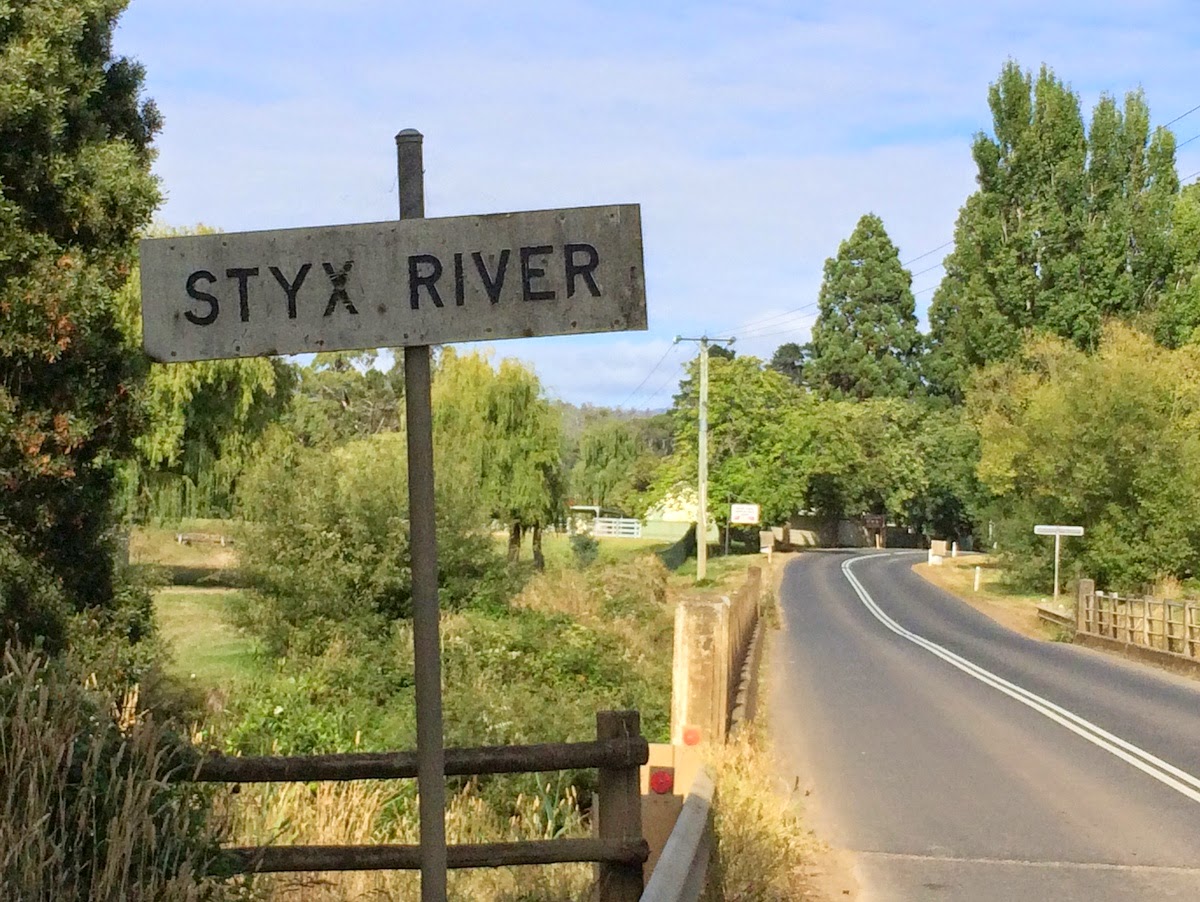 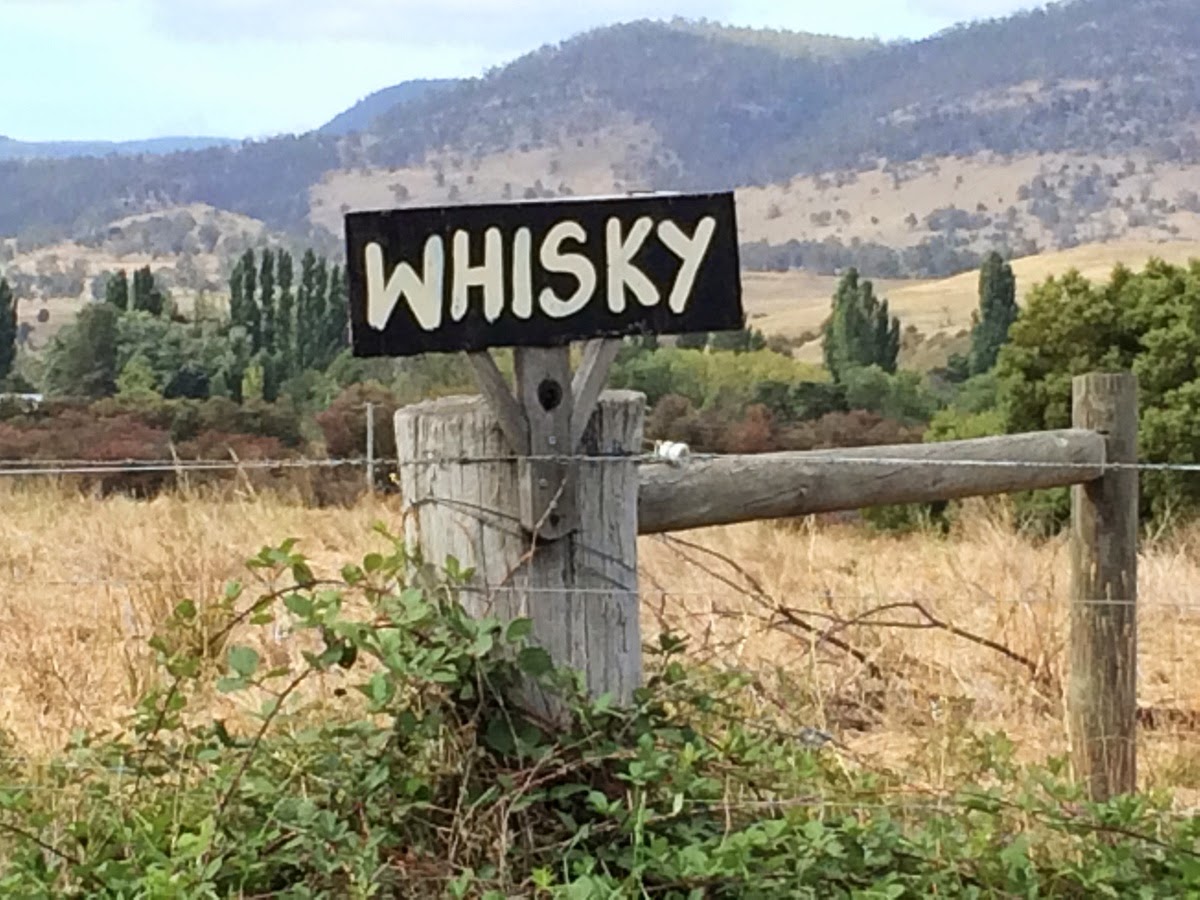 Now the road followed the increasingly wide River Derwent - a delight - to New Norfolk where, eventually, I found the others at a cafe which did the most excellent Ricotta, roast Squash and Spinach pasty. Then we crossed the river and I stopped to slap on some factor 50, as the sun was getting quite strong. We passed a paper mill (I think) and then into open country. The river became much wider as it began to approach the sea (and Hobart). 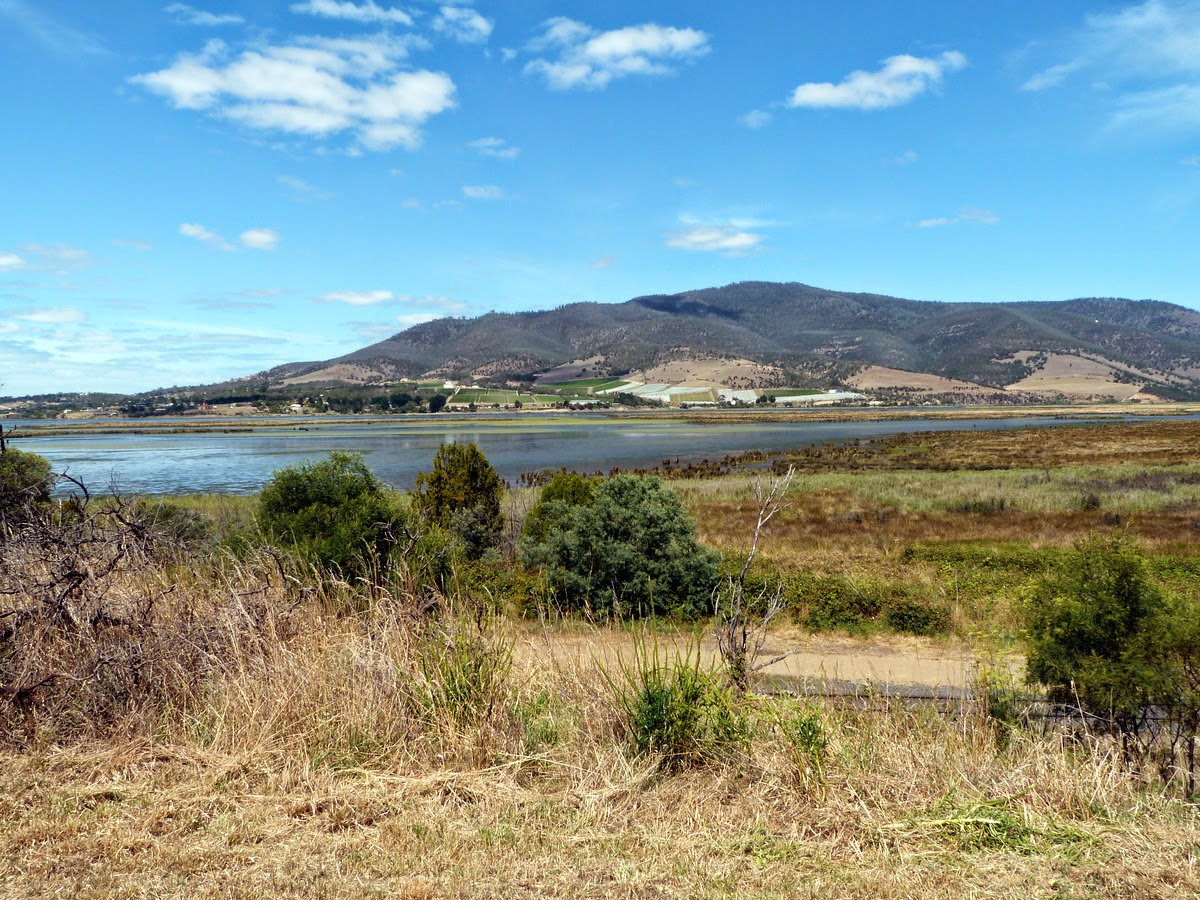 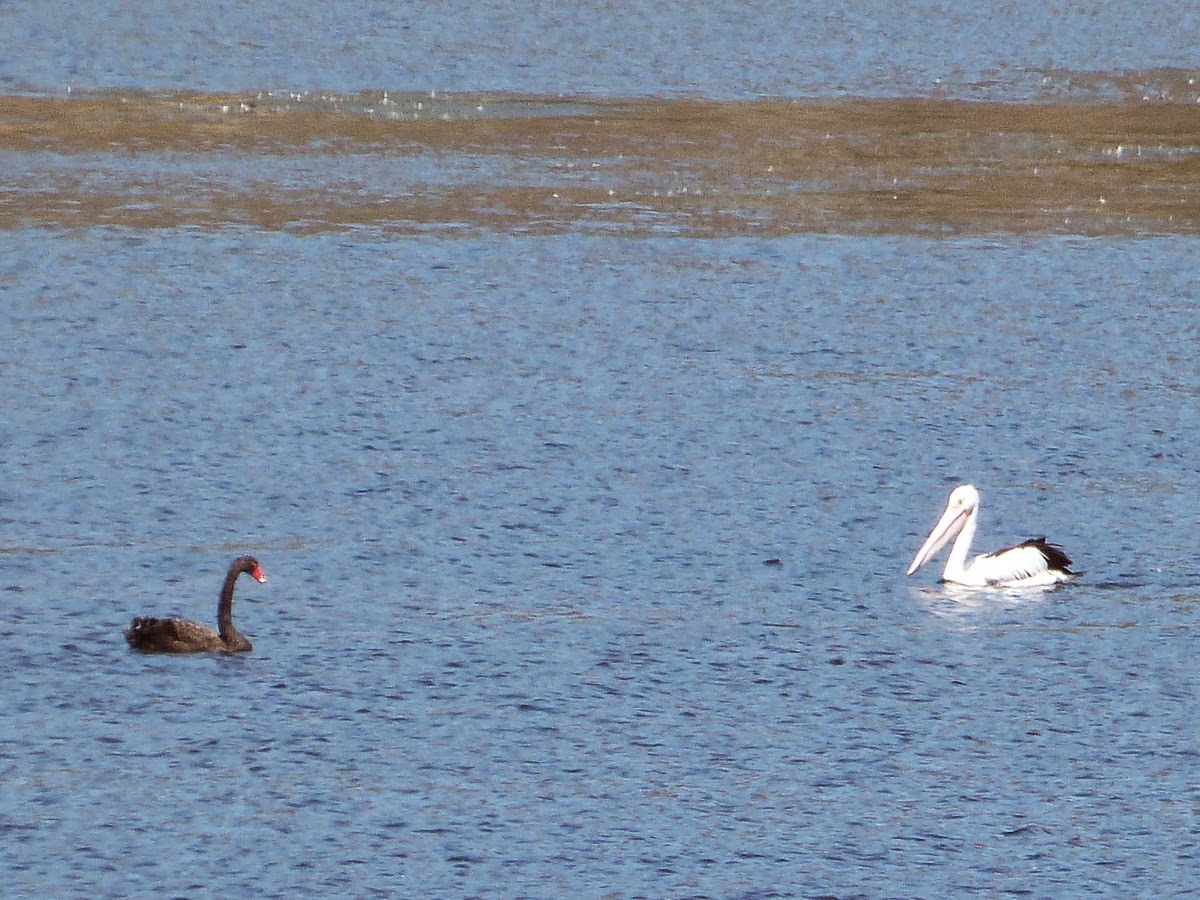 I stopped to watch a Swamp Harrier (a buzzard-sized bird of prey), some Black Swans and a Pelican and so was some way behind when I caught the group, who had stopped at a busy junction to regroup and stay together on the way into (and through) Hobart. Traffic was now heavy at times although we still found a few quieter roads. Around Old Beach then a busy dual carriageway into the Hobart suburbs, along the waterfront to the Tasman Bridge, with its ridiculously narrow, elevated and confined cycle 'path'. Poor Irene couldn't negotiate this at all, and ended up walking almost the entire length of the bridge. The trouble was that the cyclists behind her (including me) couldn't pass because there wasn't enough room with panniers!

After a bit more trauma negotiating streets and busy junctions (not designed with cyclists in mind) we arrived at a cafe next to our hotel. It was on a one way street and Ken stopped without leaving room for traffic to pass. The next vehicle was an ambulance and no amount of horn blowing would get through Ken's hearing difficulties, until I almost manhandled him out of the way!

Once the bikes were put away and we were washed and showered, I made my way to a nearby bike shop which had the exactly correct pinch bolt that I needed to replace the coach bolt that had replaced the old sheared seat-post bolt and stood me in good stead for the last couple of days.

Being Friday evening most of the restaurants in Hobart were full, but we found an excellent Indian near Salamanca which hit the spot.  No cycling tomorrow - instead we'll be free to wander around and explore Tasmania's capital city.  Another 60 miles today, 274 in total.
Posted by Bill Honeywell at 17:19