Saturday 21 February. A sunny start from the Penny Royal in Launceston and on to an off-road cycle track almost immediately, running along the water's edge. Deborah is still suffering from an upset tummy which she thinks is caused by Campylobacter on some seafood or chicken.

Just before we reach the main road we pass a water outfall with Pelicans, Cormorants and Silver Gulls:  then it's on to a dual carriageway through the suburbs. Saturday morning must be the day for club cycle rides as we've never seen so many cyclists in Tasmania before.

After ten miles or so a quiet road turns off to the right to run along the edge of the River Tamar until we get to Exeter. I can just about cope with Launceston being on the Tamar, but not Exeter! It's another example of the somewhat random way that the early Tasmanians named their towns and rivers - Devonport on the north coast, astride the River Mersey, Sheffield to the south, and St Helens on the east coast - very confusing!

This pleasant stretch took us to Exeter where we turned inland. The others raced ahead while I lingered long enough to catch sight of a fine Kookaburra in the higher branches of a gum tree. We all stopped at the cafe in Glengarry, where the generously-bearded owner told us he was born in Cornwall, although he was pretty young when he came out with his parents on £10 flights. He was very chatty and it was a while before I realised he was wearing some kind of skirt, rather like a Roman centurion. Mmm.

A long gradient followed and thankfully the sun went in for a while. The hill was blessed with many false tops, and along this wooded, undulating plateau the Sulphur-crested Cockatoos were screeching while the Black-cockatoos flew lumberingly above like large raptors. At Frankford there was another cafe where most of us stopped for another coffee and lovely home-made cake, but on this occasion I kept on going, through woods and fields, until a long descent back towards sea-level.

Having crossed the River Styx earlier in the tour, it was now the turn of the Rubicon, meandering lazily through a salt-marsh area - we couldn't have been far from the sea. Then another detour through fields and a particularly attractive avenue of trees, past an irrigation pump that was badly adjusted and threatened to soak me to the skin if I didn't get my timing right. Not much point watering the road, I thought.

Next up was the small town of Latrobe and another cafe stop. There are plenty of shops in this small town, including Reliquaire, a huge Tardis-like building full of bric-a-brac and junk. Richard likes this kind of place - this was the second one he'd brought us to, the first being in Sheffield. I prefer modern design but the sheer volume of old and antique items for sale was quite amazing. 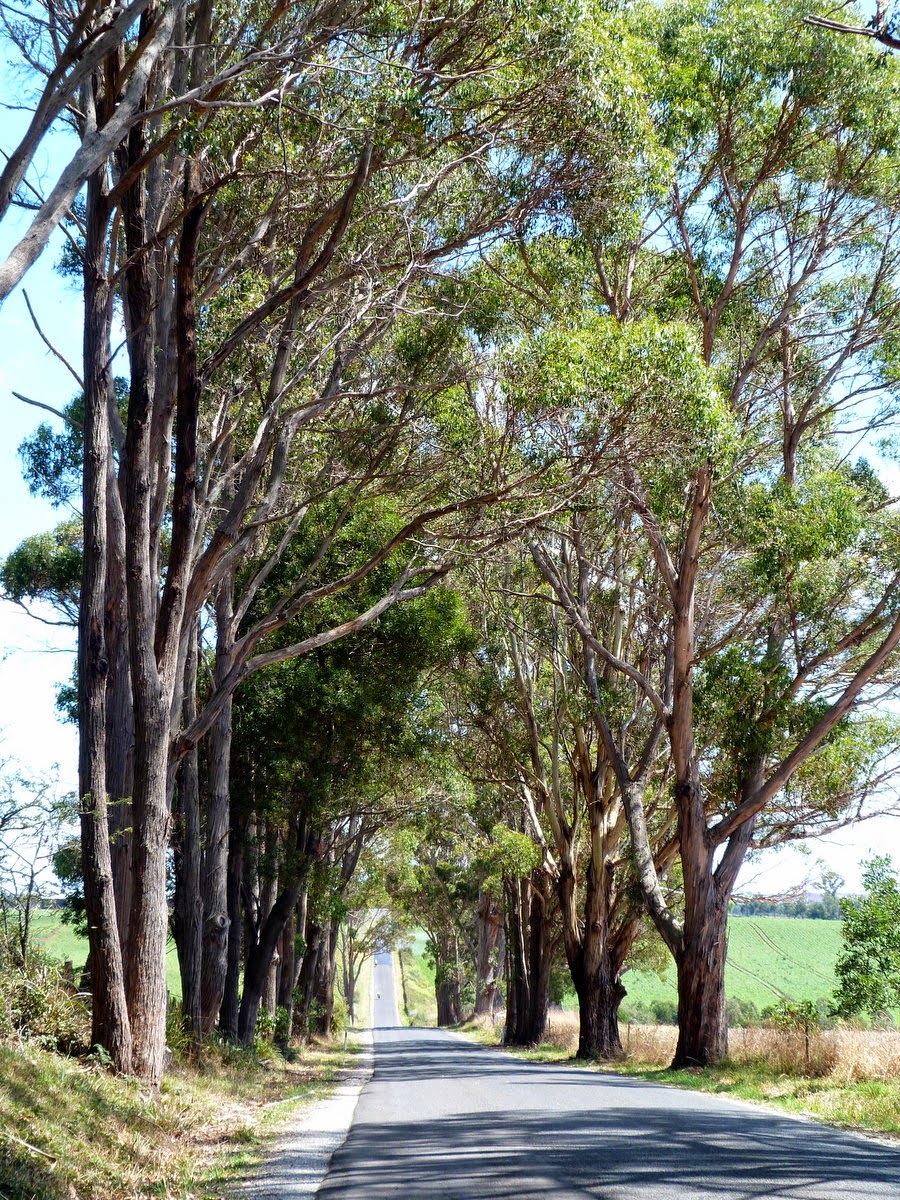 Finally to Devonport along the scenic River Road, following and then crossing the Mersey, until we were back at the Sunrise Comfort Motel where we had started our tour about a fortnight earlier.

But in the evening we were in for a treat, heading back to Latrobe (some on bikes, some by taxi) where we'd arranged with the local nature reserve rangers to look for Duck-billed Platypus in the quiet backwaters and landlocked ponds by the river. After an initial mix-up on our meeting place we found our way to a quiet lake and, having waited for what seemed like ages, saw the Platypus emerge and go feeding. They dive for a minute or so and feel for their food with their amazing leathery bill which is packed with sense organs.

Platypuses are really unusual, primitive mammals - not far removed from reptiles but with fur. They lay eggs and the mother suckles the young with milk, although she lacks any teats: the milk is just exuded from the mammary glands and the youngster laps it up.

With the light failing it was difficult to get a decent still shot, but I took a video which seemed much better. Be patient, as I haven't edited it, but the bit where she rolls over to scratch her belly is rather cute! It's at
https://www.youtube.com/edit?video_id=X2X5oQpp3OI

Back to Devonport and another first - a sandwich from Subway! - and then off to bed.